Traveling in style by train to ICT4S 2022 (Plovdiv, Bulgaria) 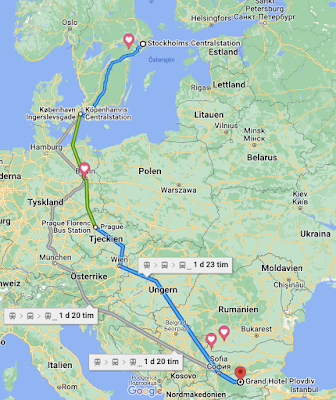 This is the trip we made from Stockholm to Plovdiv (Bulgaria) by train to attend the ICT4S conference.

Me and my colleagues Elina Eriksson and Arjun Menon took the train from Stockholm to Plovdiv, Bulgaria to attend the The 8th International Conference on ICT for Sustainability (ICT4S'22). The next blog post will treat the conference itself but this blog post is only discusses the trip (which was an adventure in itself). We hopped on the train Friday June 10 at 16.15 (but the train was delayed so actually more than one hour later) and arrived to Plovdiv Sunday June 12 at 15.00.

Elina took on the responsibility to book the trip and I commend her for her work - because it wasn't easy. KTH Royal Institute of Technology has procured a travel agency, Egencia, and we are mandated to use their services. We are indeed thankful for that in our research project Flight since they have (or should have) complete data about KTH air travel, but they are unfortunately not very good at catering to people who want to find alternative ways to travel (e.g. train). The problem is that as KTH employees we are mandated to use Egencia, but they are (apparently) not mandated to give us good service.

The best (or perhaps indeed the only) sensible way to book a trip by train is currently to do the research yourself and then send screen shots to Egencia so they can charge KTH for booking the trip we tell them to book. That sounds like a pretty sweet deal for a travel agency and I'm considering starting one myself. It would in fact be hard to not do a better job when it comes to booking trains than the "service" Egencia currently offers us. What I personally don't understand is how Egencia could win the bid to be our travel agency, but I guess they do fine with air travel and that train travel is not on the table when KTH procures a travel agency. That would then mean they can do a shoddy job booking trains as long as they don't screw up air travel. It has happened that they (probably) use the Deutsche Bahn website and book whatever option comes up first, even if it is totally unreasonable like suggesting a trip by train from Stockholm to Amsterdam where you have to change trains 10 times (true story!).

In this particular case they followed our (e.g. Elina's) instructions and booked trips from Stockholm to Berlin (direct train with a sleeper car Friday 16 - Saturday 05.30) and then a train from Berlin to Vienna (Saturday 08 - 18). Both trains were delayed so it was lucky we had planned the trip with some slack between the trains! 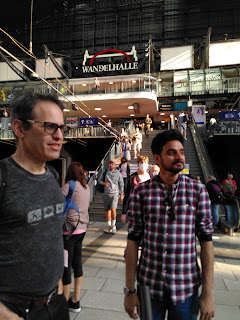 Me and Arjun waiting for the train in Hamburg 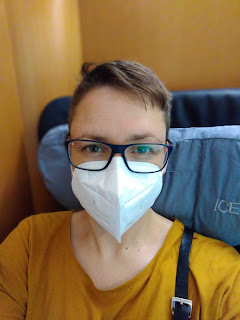 Elina. In Germany you have to use face masks on all trains (not the case in Sweden)

Our travel agency Egencia could not give us adequate help traveling from Vienna to Bulgaria - they couldn't even book tickets with the bus operator (Arda Tur) that Elina found for them and that operated a direct bus line between Vienna and Plovdiv (Saturday 21 - Sunday 15). That meany we (Elina) had to book these tickets. The smaller problem that follows is that we (Elina) had to pay for the tickets in advance and only later get money back from KTH. The bigger problem is that when we book the tickets ourselves it's basically no longer a business trip where we can call the travel agency and get help should any problems arise. Due to train delays (a wildfire somewhere in front of the train in southern Germany) we arrived to Vienna not three but only one hour before the bus left and we had to hurry to buy food and take a taxi to the bus station - but we made it and arrived in time to Plovdiv to have dinner with Ivano Malavolta from VU Amsterdam (Elina's doctoral consortium co-chair)

The bus trip was better than expected. While there was no toilet on the bus, the bus stopped every 3-4 hours so people could go to the bathroom, buy drinks and food, or in the case of everybody else on the bus, have a smoke. At these pit stops we also discovered that there were many other bus lines that started in Germany or even further away (Italy, Netherlands, UK) and that criss-crossed Central and Eastern Europe as well as the Balkans with a fine-grained network of bus lines to a wealth of cities I had never heard of. 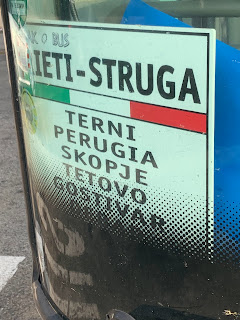 The one thing that didn't work that well was sleeping on the bus as the seats were not very comfortable. There were however not that many people on the bus so we could spread out a bit, but that didn't make up for the fact that you couldn't recline the seats very much. None of us got enough sleep on the bus and I felt stiff from the not too comfortable seats.

The scariest moment on the trip was when we realized the bus from Vienna to Plovdiv travelled through Serbia. I'm currently waiting for my new passport (post-Covid waiting times are extreme in Sweden), but I have a "national identity card" that can be used within all EU countries - but Serbia is not an EU countries and we didn't realize the route would take us there. Phd student Arjun (with an Indian passport) had the same problem and we were both afraid we would be stranded on the motorway between Hungary and Serbia in the middle of the night. That fortunately didn't happen, they just let us through without any problems at all but it was still a bit scary. This is what Arjun wrote about the border crossings in our research group's Slack channel:

In the destination country [Bulgaria] at last.. further adventures ensued at passport controls between Hungary and Serbia & Serbia and Bulgaria, where my ‘exotic’ passport caused quite a flurry -

The Hungarian border police took a solid 3-4 minutes and meticulously went through each page of my passport and compared each photo to my face, before finally (and very reluctantly) deciding to let me leave the EU

The Serbian border control were more inclusive and merely said “Oh! Indian”, in the tones of a 5-year old  pointing out an airplane in the sky to their parents

The Bulgarian border control exclaimed “Indian! Where are you going” before running off with my visa and passport, presumably to show off to his colleagues - “Look guys! I got an Indian passport! Have you guys even seen one?!”. Mercifully, he returned and I'm now in Bulgaria and back in the EU.

All in all our trip from Stockholm to Plovdiv took less than 48 hours! Months in advance we consciously chose to frame it as an "adventure" - and it worked! It was a great adventure and we enjoyed it a lot. It's however a great advantage to travel with others, it wouldn't have been fun at all to travel all by yourself. The one thing that didn't work was nailing down the details of the trip in advance. Our plan was to have a route ready at least one, but preferably two or three months in advance and then spread it through the community in the hope that other participants would join up in Denmark, Germany or Austria (where the direct bus departed). Due to all the diddling and mails being sent back and forth to the travel agency we never did get around to do that.

We also had a great idea for what the conference organizers could (should) have done when planning the conference. They should have booked two buses where conference attendees could have booked a seat. These two buses should then leave from central locations with good train connections and go directly to Plovdiv. One bus would catch people from Northern Europe and the suggestion is that it should depart from Vienna. The other bus would catch people from Western and Southern Europe and could depart from, say, Venice. It could even be that these two bus routes could join and merge in Zagreb (capital of Croatia). Zagreb is exactly a four-hour bus trip away from both Vienna and Venice and the trip from Zagreb to Plovdiv would then take an additional 10 hours (plus breaks etc.). That would surely have been the best way to travel to the conference and to arrive at the conference with an instant network of friends. 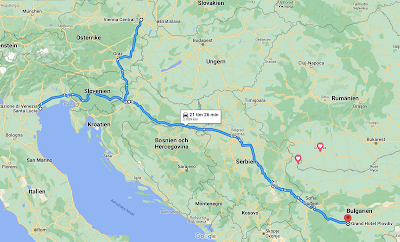 Furure scenario: hop on the conference bus either in Vienna or Vencie and go directly to Plovdiv together with other conference attendees!

This is surely how we all should travel to "local" conferences in the future, right? For further reference, see this blog post about the future of academic travel. The application was turned down but I think we will submit a new application within a year.

Last note: all three legs of the trip (Sth-Hamburg-Vienna-Plovdiv) had wifi, but only the trip from Hamburg to Vienna had good rather than shaky wifi and this is something that needs to be improved so that people can work during the trip!