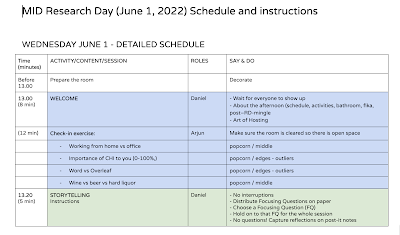 Me and Arjun organized the "Research Day" at our department; Dept of Media Technology and Interaction Design (MID). This was the second time we had a Research Day and the previous was held 18 months ago during Covid so it was virtual and probably did not lead to many new friendships. Our goal was instead to make it as interactive and physical as possible and the goal was for people at our department to meet and get to know people in other research groups better. I think this is particularly important for phd students who have been cooped up for the better part of two years and who might not know or indeed even recognize everyone who works at the department!

Me and Arjun used some of the methods we picked up at the Art of Hosting course we attended at the end of last year and most prominently we used Storytelling as a cornerstone for the event. We have six teams (research groups) at the department and each team has two team leaders. We invited one team leader from each group to become a "team storyteller" for a day and a large part of the schedule was structured around these stories. While neither Olle nor Olga could represent the Technology-Enhanced Learning (TEL) group, we had no less than five storytellers with us during the event (in order of appearance): Madeline representing the Interaction Design team, Elina representing (my/our group) the Sustainable Futures Lab, Roberto representing Sound and Music Computing, André representing Creative Media Technology and Eva-Lotta representing Social, Physical and Cultural Environments (SPACE). All storytellers received the following instructions a week in advance:

During the event, everyone who listened to the storytellers chose to concentrate on one out of six Focusing Questions:

Choose one of these questions before you hear a story:

Since Art of Hosting can (and in this case did) exude playful inclusiveness, I am certain very few participants understood how much time me and Arjun had put into planning the event (except those team-mates of ours who also attended the same course in Art of Hosting half a year ago). Most participants were just happy things worked and might not have spent a lot of time thinking about the work behind "making it work". While the portfolio of Art of Hosting methods is wonderful, it is still necessary to think about the purpose of an event (in this case a Research Day for colleagues at a department), to match that purpose to one or more methods, to think of a "workflow" and then customize the methods so they seamlessly latch on to each other, fit the event (purpose, venue, time, audience etc.) and fit the purpose of the event. So we started the planning process by stating goals we aimed for:

What feeling(s) would we like participants to have when the day comes to and end:

We didn't ask participants to fill out a survey (the event was about our research, but we didn't perform research on our colleagues!). We just hope the participants enjoyed the event and made new friends among their colleagues and anecdotal evidence indicates at least some did!

The MID Research Day was followed by the MID Research Day mingle (with catered food at the department). I broke off and had an important meeting with a student during the mingle and then rejoined the ten or so participants who shot the breeze after others had left. I think the event might have finished around 10 pm at night and I would say it was a success - but I'm of course both partial as well as deeply implicated!

At this point it will sound as we only did a storytelling event but here are some other Art of Hosting methods we used during the four-hour half-day event:

- We arrived in good time and prepared the room so there was a large open space and tables around the walls. We also brought some objects to furnish the room and make it less university-mandated sterile (yoga mats, a salt lamp, a sheep skin etc.)

- We divided the storytelling event into two parts (3 storytellers and later 2 more storytellers). Those who listened were divided into groups depending on what Focusing Question they had chosen and had time to discuss and later share their "findings" with the larger group. Everyone also wrote down insights on post-it notes that we collected on sheets of A3 papers (that we had hung on the walls).

- We then divided people into groups of 4 and had circle conversations and where we asked participants to discuss two questions:

- Question 1: What questions were awakened when you heard the storytellers?

- Question 2: How do you position your own work in relation to what your team storyteller said?

At this point we gave these groups more than 30 minutes to discuss these questions and whatever else they wanted to talk about, and the majority of the groups follow Elina's lead and took an outdoor walk in the lovely weather.

- We had a final harvesting (feedback) exercise where we invited each participant to write one or two short personal letters (or notes, and by all means anonymous) with feedback to storytellers. These notes were framed as "gifts" to the storytellers and we later sorted them and put them in individual envelopes (some of the envelopes are however still waiting on my desk to be handed over to storytellers.

- We obviously had breaks throughout the day and various mini-exercises to liven things up.

Me and Arjun came prepared with a detailed schedule for the 4-hours event (see image above) and with detailed instructions for ourselves and for the participants. We started planning the event more than two months in advance and met for an hour here and there (I can find at least five meetings in the preceding 5 weeks but it could easily have been more). But it turned out great and I hope my colleagues were happy with the Research Day. I would be willing to help/advise the people who take it upon themselves to organize the next Research Day but would prefer for the responsibility to pass to another research group at the department!