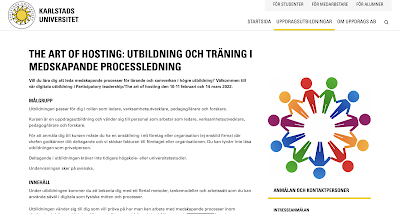 This has been a very hectic week - possibly the most hectic week ever (e.g. more blog posts to come). So I back-date this blog post a few days and pretend it was written on Monday. So what happened on Monday?

We just finished the last day of the three-day course about Art of Hosting and co-creation methods for "the academy" (formally organized by Karlstad University, here's more official info about the course). The backstory is that my colleague Elina Eriksson took a similar course a year ago. That was during Covid and it was held online, but she said it was single best planned and executed event she had attended during two years of Covid lockdowns. And then there was the really great course contents. In just so many words, she thought it was amazing. We were then very fortunate, and in the beginning of December (in the lull between Covid Delta and Covid Omikron), a three-day off-line course was offered near Stockholm and not only did Elina take the course again, but she also convinced me as well and our three ph.d. students Aksel Biørn-Hansen, Minna Laurell Thorslund and Arjun Rajendran Menon to take the course. The course was very interesting and inspiring, and co-creation tools, methods and models from Art of Hosting will certainly be a topic that will reoccur regularly on the blog from now on. It will in fact play an important role in the new masters programme (and not the least in the course "Leading complex change processes") that I wrote about in the previous blog post.

So Elina had at that time (December) taken two Art of Hosting courses, and since the same-ish team planned to hold an online course that was directed towards "the academy", they recruited her (being a researcher and a teacher) to be part of the team of facilitators. This made sense not the least since she has experiences from using action research and from using participatory and co-creation methods both in and after she completed her ph.d. The bigger surprise was that in January I was also offered the chance to be part of the facilitation team. I very much felt like the most junior participant in a group of extremely talented and experienced persons who have used and taught co-creation methods for years or even for a decade or longer; Anna-Karin Berglund, Markus Schneider, Kajsa Balkfors and Emilia Rekestad (read some more about them here). I did however realize that this was an opportunity for me to learn a lot more from the masters (yes, the course we took in December was that good).

To make a long story short, it has been a very enlightening, exciting and educational journal, but the planning and preparations have also involved a lot of hard work and early morning meetings (oftentimes the only time slot that worked for all of us was between 7-9 in the morning). Still, it has been a delight to work with the facilitation team and I have personally learned so much from this journey. It feels futile to try to capture it all in one blog post, so my plan is instead to show you in the months to come. Me and Elina and our research group will use different co-creation methods in events we plan during the spring term (including an even next week). It's even the case that I immediately managed to utilize some of what I learned in December in the course that I taught at KTH at that time!

The online course itself consisted of three full-day online sessions on Feb 10, Feb 11 and then, after a four-week break, on March 14. Besides the six facilitators, there were 52 participants. Most came from different Swedish Higher Education Institutions (Chalmers, Högskolan Dalarna, Högskolan i Halmstad, Högskolan i Skövde, Högskolan Väst, Karlstads Universitet, Karolinska Institutet, KTH, Linnéuniversitetet, Lunds Universitet, Södertörns Högskola, Stockholms Universitet), and some additional course participants worked in other organisations (including quite a few who worked for different Swedish municipalities). What surprised me was that while a majority of the participants came from different HEIs, only a minority of these participants were teachers and researchers, and many instead worked with different support functions like pedagogical development, systems owner or project/research coordination etc.

Despite the fact that it's tough to sit in front of a computer and attend a course for nine hours, I think the course was a success. Much had to do with the persons, the level of preparations and the tight coordination between the facilitators (much of it planned and decided in advance, but sometimes involving virtuoso improvisations and covering up for each other). The other half of why it was successful is the actual course contents (e.g. the wealth of tools, methods and models presented/explored in the course, see the list below). 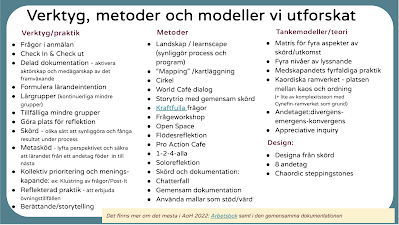 So how do you learn to use co-creation methods? You of course learn to use them by actually using them. After the first day, many activities were led by the course participants themselves - after having received coaching from the facilitators. I coached three persons (Nina, Nicolette and Patrik) about how to use a particular method for reflection, "think-pair-square-share", and they later led all course participants in an exercise during the third and last day.

I could write and write and write about this - which I'm not going to do today. But I will later come back to Art of Hosting and describe how we have put these methods to use! Also, there will be a new three-day off-line course near Stockholm at the end of November and I can whole-heartedly recommend it! The course will be be given in Swedish and it's open for everyone (e.g. not just for "the academy" but for anyone, including private persons). There is unfortunately no further information about the upcoming course at this point in time, but here's some info about the course that was given at the end of last year. I also think there will be a follow-up course for the academy, but I don't know when or where. We just finished the three-day course and while it certainly was a lot of fun, it was also a huge effort and we have to rest and recuperate before we have the energy to start up something new...

One specific artifact that held the whole course together was a visual emerging "Learnscape" that started with a bare-bones structure at the beginning of the course but that was progressively fleshed out during the course. Facilitator Emilia did most of the drawing and this is what the three-day course we just finished looks like graphically (using the online drawing tool Miro): 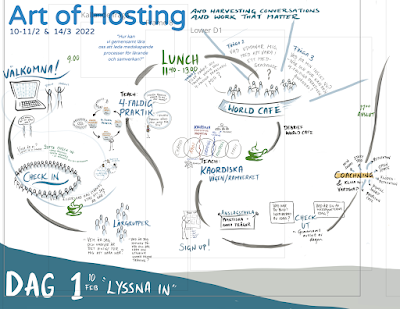 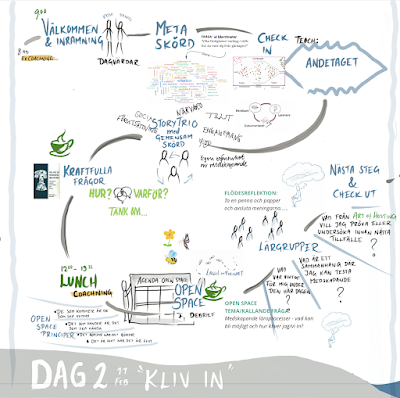 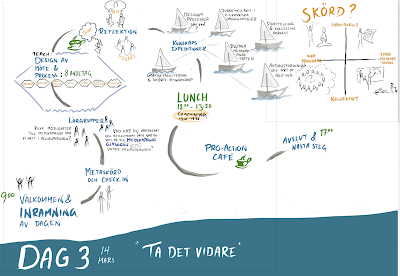