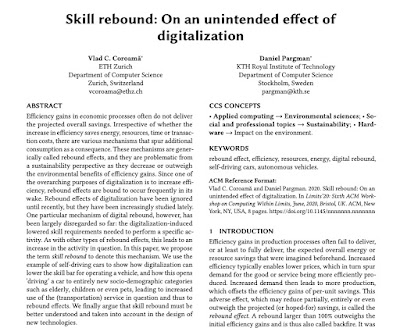 
ABSTRACT
Efficiency gains in economic processes often do not deliver the projected overall savings. Irrespective of whether the increase in efficiency saves energy, resources, time or transaction costs, there are various mechanisms that spur additional consumption as a consequence. These mechanisms are generically called rebound effects, and they are problematic from a sustainability perspective as they decrease or outweigh the environmental benefits of efficiency gains. Since one of the overarching purposes of digitalization is to increase efficiency, rebound effects are bound to occur frequently in its wake. Rebound effects of digitalization have been ignored until recently, but they have been increasingly studied lately. One particular mechanism of digital rebound, however, has been largely disregarded so far: the digitalization-induced lowered skill requirements needed to perform a specific activity. As with other types of rebound effects, this leads to an increase in the activity in question. In this paper, we propose the term skill rebound to denote this mechanism. We use the example of self-driving cars to show how digitalization can lower the skill bar for operating a vehicle, and how this opens ‘driving’ a car to entirely new socio-demographic categories such as elderly, children or even pets, leading to increased use of the (transportation) service in question and thus to rebound effects. We finally argue that skill rebound must be better understood and taken into account in the design of new technologies.
.
Upplagd av pargman kl. 19:58 Inga kommentarer: 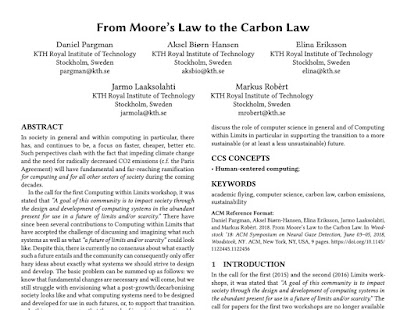 In this paper we argue that the work of imagining an actionable “future of limits” could benefit from using the “carbon law” as a starting point. The carbon law is based on work in the environmental sciences and we exemplify how it can be used to generate requirements that can guide the development of computing systems for a future of limits. While these lessons are general, we exemplify by describing a research project that aims to support the KTH Royal Institute of Technology’s goal of - in line with the carbon law - radically reducing CO2 emissions from academic flying over the next decade. We give examples of how computing can aid in this task, including by presenting visualisation tools that we have developed to support the KTH carbon abatement goals. We also discuss the role of computer science in general and of Computing within Limits in particular in supporting the transition to a more sustainable (or at least a less unsustainable) future.
.
Upplagd av pargman kl. 20:04 Inga kommentarer: