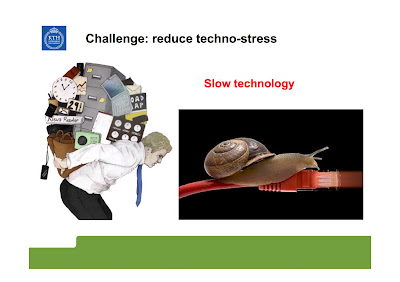 Notes:
- We spend a lot of time and attention learning how to use, upgrade, troubleshoot, manage technology. That is stressful.
- Slow technology: ”a design agenda for technology aimed at reflection and moments of mental rest rather than efficiency in performance.”
Upplagd av pargman kl. 23:08 Inga kommentarer:

.
Karin Bradley (from the Department of Urban Planning and Environment at KTH) and me just submitted an 8000-word article to a special issue of the Cambridge Journal of Regions, Economy and Society. The topic of the special issue is “Sharing Economies? Theories, practices and impacts”.

After having handed in an abstract in the beginning of the summer, we were invited to submit a full paper to the special issue by mid-November. That does however not, as far as I understand, mean that we are in any kind of "fast lane" to get our submission accepted for the special issue ("all papers would be subject to a strict peer review process"). I furthermore don't have any idea of when we will get feedback on our paper, but, we are talking about an almost absurdly drawn-out process. The initial call for abstracts was disseminated in March 2015 and the special issue is scheduled for publication in 2017, i.e. about two years after the call was published!

We have at this point changed (altered) the title of our paper from "Supporting 21st century commons" to the perhaps slightly less ambitious "The sharing economy as the commons of the 21st century" when we realised we could not fulfil the promise of the previous titel on such a general level.

The basic idea of our paper is to take Elinor Ostrom's (1990) work on natural resource commons (grazing lands, fisheries, forests, irrigation systems etc.) as a starting point and then think about the differences between these types of commons and the contemporary human-made "sharing economy commons" of the 21st century.

Abstract:
This paper aims to make a contribution to the debates on how contemporary collaborative commons, as part of the wider sharing economy, can be understood and supported. Three cases of contemporary commons are analysed: a DIY bike repair studio, a pop-up home office concept and Wikipedia. The paper shows how the design principles developed for governing natural resource commons are only partly applicable for these contemporary commons. The paper illustrates the differences of these types of commons in terms of the nature of the resource being shared, scarcity, barriers to entry, and how rules are formulated and upheld.

Excerpt from the Introduction:
[...] we revisit Ostrom’s (1990) institutional design principles for the governance of long-enduring natural resource commons and explore to what extent these principles are relevant for understanding contemporary collaborative commons – commons that are situated in a globalized, urbanized and digitalized societal context. The aim of this paper is to make a contribution to the debates on how the contemporary collaborative commons, as part of the wider sharing economy, can be understood theoretically and how they may be supported.


Ostrom’s design principles are based on extensive empirical studies of natural resource commons, situated in localized contexts and where users are reliant on each other and on these commons for their livelihood. In this paper we analyse three different cases of what we will here refer to as “21st century commons”: the Bike Kitchen, Hoffice and Wikipedia. These 21st century commons are types of commons that have grown in recent years, being set in a more globalized, urbanized and digitalized world, and representing different degrees of place specificity, use of digital technologies, and social bonds amongst their users. [...]
.