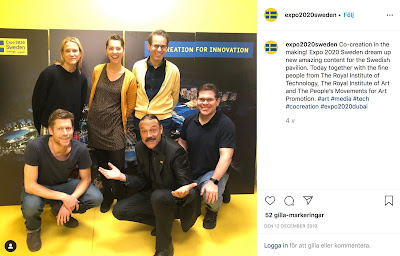 I recently (less than two weeks ago) wrote a blog post about how we got an informal invitation to display our science + art + communications project "Homo Colossus" at the upcoming World Expo (October 2020 - April 2021). KTH will be part of the program in the Swedish pavilion during two separate weeks (in November 2020 and February 2021) and our project would then be part of KTH's program. We were invited by Karin Larsdotter who is part of the working group that manages the KTH Expo 2020 program. That working group had a meeting in the beginning of this week and Karin then reported back to them.

Apparently that meeting was also attended by Mattias Hansson who is Program Director in the Committee for Sweden's Participation at Expo 2020 in Dubai. That means he is responsible for the contents of the Swedish pavilion for the duration of the World Expo (6 months). I don't know exactly how, but Karin apparently managed to set up a separate meeting between Mattias Hansson and the Homo Colossus project and all five project members (me, Mario, Åsa, Per, Belinda) could, with short notice, liberate ourselves from other commitments and meet up with Mattias Thursday this past week (Karin also attended the meeting). The picture (above) was published on the Swedish Expo 2020 Instagram account the very day after we met.

Mattias started the meeting by stating that Sweden had decided to participate in the World Expo back in 2017, so whatever objections could be raised, participation was in itself not negotiable. I have since managed to find the original mission statement (the outcome of a cabinet meeting in December 2017) where the mission from the Swedish parliament is stated:

"The Government has decided that Sweden will participate in the World Expo 2020 exhibition in Dubai, provided that the state and the Swedish business sector [näringslivet] finance the Swedish participation in equal parts.
[...]
The purpose of Swedish participation in Expo 2020 is to strengthen a comprehensive and positive image of Sweden abroad, to promote Sweden as a knowledge nation, the competitiveness and creativity of Swedish trade and industry and to strengthen Sweden's attractiveness for tourism and investments and for research, innovation and cultural exchange. [...] Promoting Sweden and Swedish trade, education and research collaborations, economic relations and cultural partnerships with other countries also create platforms to discuss issues such as democracy, gender equality, human rights, sustainability and environmental issues.
[...]
The total cost of Sweden's participation in the world exhibition is estimated at about 165 MSEK, of which the business sector [näringslivet] and the state are expected to contribute 82.5 MSEK each. In the Budget Bill for 2018, the Swedish Government proposes that 3.5 MSEK is allocated for that purpose in 2018, and estimates that an additional 50 MSEK is allocated for the years 2019-2021 to cover the state's share of the costs of Sweden's participation in the exhibition. In addition, several state-sponsored actors will contribute to [implementing and financing] activities that are related to the Swedish pavilion."

Mattias then talked about the two main kinds of critique that the Swedish decision to participate in Expo 2020 regularly gets; concerns about sustainability and concerns about the the lack of democratic rights in Dubai. Here's a critical just-published report from the Swedish Ministry for Foreign Affairs about "Human rights, democracy and the rule of law in the United Arab Emirates" (Dubai is one of the seven emirates that constitutes the United Arab Emirates). The official Swedish position is that it is only by participating (as one of 192 countries) that we have the chance to change things for the better (in terms of democratic rights, women's rights, guest workers' rights, sustainability etc.): "Our attitude is to go there and show them what we think we are good at, rather than sitting home and telling them what we think they do poorly."

It was apparent that Mattias had given this speech many times, he talked for at least 10 minutes straight and we hadn't even presented ourselves at that point. Mattias also mentioned that the World Expo expects 25 million visitors and that (at least) 1 million will visit the Swedish pavilion. These visitors will stay for different durations and can be thought of as "skimmers" (15 minute), "swimmers" (30 minute) and "divers" (2 hours).

I then presented (pitched) the Homo Colossus project and this eventually resulted in an offer by Mattias to be part of the permanent exhibition in the Swedish pavilion for the duration of the World Expo. We even started to discuss which particular spaces would be most suitable for Homo Colossus to occupy inside and outside the Swedish pavilion. Mattias was also particularly intrigued by my idea of sending KTH students to Dubai on a container ship bound for China (these ships stop in Dubai on their journey eastwards). The students would first go by train from Sweden to Genoa (Italy) and then by container ship to Dubai - a trip that takes around 17 days. I had framed such a trip as a way of decreasing the carbon emissions of a trip to Dubai but Mattias also saw such a trip as a huge opportunity in terms of a media campaign. What was really interesting for me though was that Mattias opened up the possibility of having Expo 2020 sponsor our students' trip.


This is the eighth (!) and last blog post about Homo Colossus during 2019. The project has morphed and changed and picked up the pace during the year and I suspect so much will happen in 2020 that I I could probably write a new blog post about the project every week. There are certainly many more things I could have written about in 2019, but the project is only part of what I work with and I feel I can't fill the blog with information about this one project when much else is also happening. I thus won't write a weekly blog post about Homo Colossus in 2020 - but I'm also sure I will write at least one blog post per month. The pace of the project is about to increase even further in 2020.
.
Upplagd av pargman kl. 20:01 Inga kommentarer: 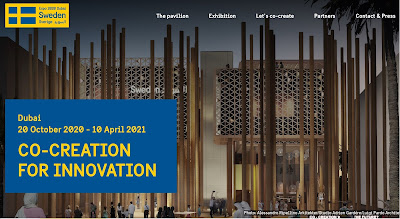 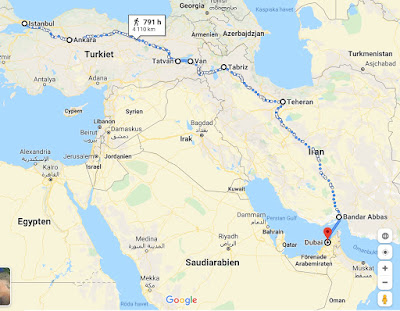 So exactly how bad is a World Expo from a CO2 emissions perspective? That's of course hard to say but Mike Berners-Lee wrote the book "How bad are bananas? The carbon footprint of everything" in 2010 and one of the examples in the book is an analysis of the CO2 emissions from the 2010 football World Cup. The World Cup was held in South Africa that year and it was estimated that 1.2 million spectators saw the matches live. The total CO2 emissions from the World Cup were estimated to be 2.8 million tonnes and transport (of players, spectators and everything else) accounts for about 85% of all emissions. The World Expo is however much much bigger and it has been estimated that the 2020 World Expo in Dubai will be attended by 25 million visitors during the 6 months that it is open....
.
Upplagd av pargman kl. 00:04 Inga kommentarer: