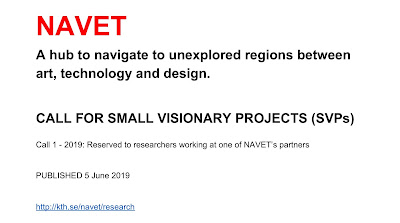 Addendum: We were supposed to know if our application was approved by October 1 but only on October 25 did we get an official notice. In the end, 6 out of 15 applications were funded and ours was not one of them. There has, to the best of my knowledge, been zero information published about what applications/projects have been approved. The three reviewers gave our application a paltry 2.7 out of 5 on each of the three criteria, "Aim of this project", "Strategic importance and impact" and "Future plan". It could also be that our applications was disadvantaged or severely disadvantaged because one of the reviewers wrote that "A collaboration between KTH, KKH and Tekniska Museet (does this qualify under the conditions of Navet’s SVP – are there enough Navet partner institutions involved?) [...] Unlike other application [...] there are questions regarding the number of Navet collaborative partners involved". That was definitely a let-down. It would have been good to know in advance if our application was disqualified and we would obviously not have spent time writing it  but I'm still unsure if that's the case or not. I'm also unsure whether we will bother to apply for a Small Visionary Project again (the next call is supposed to be announced in February 2020 but there is (again) zero information on the Navet homepage so it's a bit unclear.
.
Upplagd av pargman kl. 19:56 Inga kommentarer: