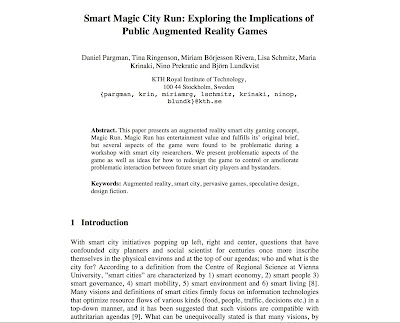 If Magic Run and similar games potentially endanger the lives of its users, we urgently need to discuss possible changes in the design of the game. We will briefly discuss three avenues of thought to that effect, the first being aimed at increasing the security of bystanders, the second at increasing the safety of players and the third discussing emergent norms that mediate between bystanders and players.
.
Upplagd av pargman kl. 22:20 Inga kommentarer: