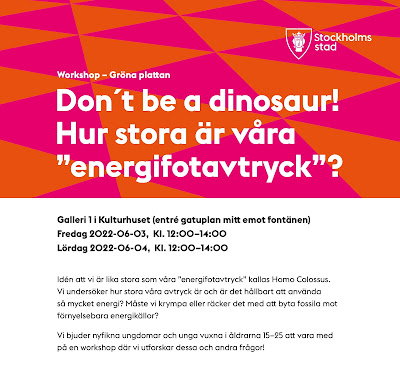 Our science + art + communication project "From Homo Sapiens to Homo Colossus" organized a workshop at Stockholm +50 in cooperation with the City of Stockholm and Kulturhuset (House of Culture)!

A high-level UN meeting has been held in Stockholm this past week, Stockholm+50. The UN meeting also commemorates the 1972  United Nations Conference on the Human Environment that was held in Stockholm - the first large UN-held conference on the environment. Besides the UN meeting itself, numerous activities have been organized in Stockholm during the past week by the civil society and other actors, including by the City of Stockholm.
We were invited by the City of Stockholm to be part of the activities that were planned to happen right in the center of Stockholm - at Sergels Torg and in Kulturhuset (The Stockholm House of Culture). This happened three months in advance and our research project have since designed, developed and implemented a 2-hour workshop format for the Stockholm+50 event - see the invitation to the event above.
During the first month, there was a lot of planning and decisions-making (who is the target audience, would you need to sign up in advance, should school classes or individuals sign up, what help would we need in terms of materials and personnel etc.). We decided to target youths and young adults (14-25 years old). They are also the audience for quite some activities at Kulturhuset and this is also a convenient group for us since it's basically "my students at KTH” and “their younger siblings” (e.g. my own teenage children). The City of Stockholm and Kulturhuset also offered support in the form of a cultural and theater pedagogue/educator with much experience of working with youths, Åsa Kalzén, who has been a sounding board during the development of the workshop format. Åsa came to the kick-off for our detailed workshop planning - a design meeting at KTH a month in advance of the workshop itself.

Our first planning session.
From left to right: Daniel, Belinda, Per, Åsa K, Åsa AB. Behind the camera: Mario.
While there are five persons in our science + art + communication project, it was me and Belinda who took on the responsibility of planning and leading this workshop. While I have known Belinda for the better part of a decade, I have not worked that closely with her before, but we had a great cooperation and met at least once per week in the run-up to the workshop (often in front of a whiteboard).
There were certainly many challenges in the communication between us and the City of Stockholm. Less than a week in advance we had no idea how many had signed up for our Friday and our Saturday workshops - or even if there would be a workshop at all. It later turned out the project leader did not herself have that information without reaching out to another part of the City of Stockholm organization. And while the design of the invitation (above) is great, it could have been even better (for example with a QR code!) if we had been able to provide just a little more input - but the design was also done by "difficult-to-reach people elsewhere in the organization". I have not worked a lot with City of Stockholm but based on this experience, it seems to be a mature compartmentalized bureaucracy. The event accepted sign-ups up until the very last minute, so it wasn't until Friday we found out that not enough people had signed up for our Saturday workshop and we had to pull the plug and cancel it. This was very unfortunate as we had planned to show some really cool things (Augmented Reality!) on Saturday that we couldn't show on Friday. 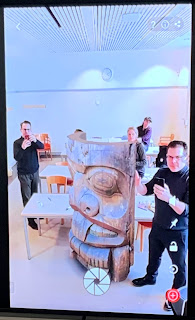 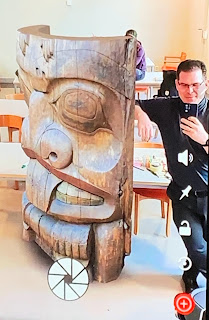 Testing off-the-shelf Augmented Reality (not specifically adapted to our purposes and our project)
But also our Friday workshop was threatened at the very last minute. On my way to Kulturhuset at the day of the event, I called the school teacher who would show up with her class mid-day. Shen then apologized profusely as she told me on the phone (with just a few hours advance notice) that she had double-booked her school class and that they had to cancel our workshop. That was definitely the lowest point of the day. Me and Belinda (in a semi-panicked state) were very close to cancelling also the Friday the workshop at that point.
BUT, this disaster was followed by incredible other-worldly luck. Our first stroke of luck was that we had two total heroes working as liaison officers between Kulturhuset and us, namely Åsa K (above) and Ingemar. As me and Belinda made emergency plans to reformat our workshop so it would work for more temporary walk-in passers-by, Åsa and Ingemar accustomed and propositioned a larger group of people who just happened to hang around outside (remember, this was in the very center of Stockholm) and they invited/convinced them to take part of the workshop - to which they agreed! This group returned one hour later since we (again) needed to rework and replan, including translating the workshop from Swedish to English on the fly. We thus in the end gave the workshop to a group of 16 who by an incredible stroke of luck consisted of 50% teachers and 50% students AND 50% of the teachers and students came from Sundsvall (northern Sweden) and the other half from Bogotá, Colombia (my father was born in Colombia! My uncle who just turned 80 lives in Bogotá! I've been Bogotá several times - but not in the last 25 years!). So we had a dream group of participants that was further strengthened by our specially invited guests Siri and Julia who works at Tekniska Museet (the Stockholm Technical Museum) and Per who works in the Homo Colossus project but who had not been involved in planning the workshop.
The workshop itself was planned together with Belinda and according to my recently-acquired Art of Hosting co-creation methods & skills (see more here and here), and, it was a success! Everybody loved it and everybody was thankful. Me and Belinda were thankful this particular group showed up and made the workshop possible, and they were thankful we organized a customized workshop "just for them"!
Siri and Julia from Tekniska Museet were also happy and they invited us to present our Homo Colossus project at a personell meeting at Tekniska Museet after the summer. We already cooperate with Tekniska Museet and we are interested in further developing this two-hour Homo Colossus workshop so that they can use it when school classes visit them. We hope to be able to work on this during the autumn, and having Siri and Julia experience the workshop themselves was a great start. All in all we went from the lowest low to the highest high and the workshop became a total success (by fluke of luck)!

Me, starting up the 15-minute mini-lecture to an audience of Swedish and Colombian teachers and students.

The core or the workshop consisted of a 15 minutes long mini-lecture and an hour-long World Café exercise with three separate discussion rounds that were structured around the questions:
The third question was preceded by an exercise where participants self-sorted along an axis across the room and according to their answer to the following question: "As we heard [in the mini-lecture], we currently face a challenge that is a combination of 1) exchanging fossil fuels for renewable energy sources and 2) use less energy. Stand over there [at the other end of the room] if you think the answer is to aim for alternative 1 and over here if you think the answer is to aim for alternative 2 - or you can choose to stand somewhere in-between 1 and 2 according to your personal position on this question. I then divided the participants into four groups depending on where they stood in relation to the two alternatives.

World Café round 2 (second color of post-it notes has just been put into play).
The major part of the last half hour was spend on "harvesting"; on giving the participants the opportunityu to think and discuss the workshop (contents, format) based on these three questions:
- What was the best part of the workshop?
- Do you have any suggestions for improvements? [This is a more polite way of asking what they didn't like about the workshop.]
- What is the next step (for yourselves in terms of thinking/acting/doing)? Back-up question: what's the next step for society?
Each person was encouraged to write one post-it note per question. We haven't really looked at the post-its yet but me and Belinda will go through and analyze the feedback we received after the summer!
My workshop colleague Belinda wrote a shorter and snappier text on LinkedIn a week after the workshop. Hers is the better text (and a much faster read) than this "more complete" blog post and her first half reads like this (the second half has already been covered by the text above):
What is energy? This was the core question Daniel Pargman and I explored on Friday last week during our workshop "Don't be a dinosaur!" The title refers to the actual weight of a human, if we were to EAT all the energy we consume in a day (food, but also fuel, electricity, heat etc). Rather than weighing somewhere around 50-100 kg, it would turn us into a creature of around 20 000 kg. This is the aprox weight of a dinosaur or, as we like to call it, a HOMO COLOSSUS.
.
Upplagd av pargman kl. 20:11