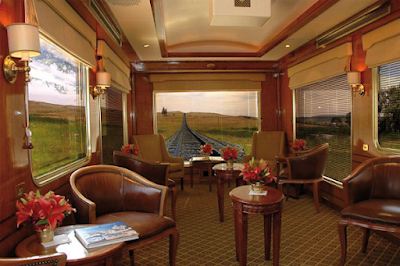 Image: Imagine a multi-day rolling academic conference where you take a break to catch up on your reading in this train carriage (it looks like a paining, but is in fact a photo from The Blue Train in South Africa).
I recently "slipped" into an application, "Edu-Rail", that was handed in earlier this week. The principal investigator (PI) is professor Per-Anders Hillgren at the School of Arts and Communication at Malmö University. In this blog post I will write about 1) the research grant application, 2) the Vinnova call for "future prototypes" and 3) the project partners.
The goal of the project is to: "Gain better knowledge of how research work can be carried out during train journeys and create a vision and concrete solutions for how this can be made possible." Here's the longer (250-word) summary of the project:

The international research community rely on knowledge exchange, where researchers criticize and build further on each other’s work. This often take place through international conferences and scholars have had privileges to travel a lot. Although the pandemic has facilitated the development of more online events, many researchers emphasize the importance of physical meetings. In the suggested scenario, the flight industry has not succeeded to become carbon free. The Universities in Europe have therefore invested in Edu-Rail, a jointly owned train company with daily departures between the north and south, and the east and west of Europe.

The train offers opportunities to host academic work such as seminars, workshops and smaller labs and supports the emergence of multi- and interdisciplinary research where scholars can network and exchange knowledge during the journeys. In the scenario Edu-Rail started as jointly owned by the European universities, but later evolved into an experimental cooperative directly owned by the European research community. The onboard facilities, maintenance and services are all characterized by collaborative services and an extensive sharing culture. The purpose with this project idea is to balance a tough future (Scenario 4) that limit our opportunities to travel, with a concept that can offer services that is not present in today’s transport systems.

Edu-Rail will be prototyped through service- and co- design and scenarios that elaborates on possible implications and values. It will also be tested through a train journey where a group of researchers will engage in research by holding seminars and workshops. The material will then be used at public seminars to discuss the future of work travel.

The research project is small - it will run for just three months between mid-August and the end of November this year. The process of handling the applications is thus also unusually short and we'll know if the application will be granted money already before the end of April. While the project is small (both in terms of time period and money), the burn rate is quite high, e.g. a lot will happen in short amount of time and the application consists of no less than six different activities. One of the very first activities is to prototype Edu-Rail by organizing a train-bound six-person two-day miniature research conference (with seminars and workshops) in September. The train trip will contribute to the creation of knowledge about "lived and embodied experiences of how research work can look like on a train".

The Centre for Energy and Climate Transformations also has a very ambitious "Low-Carbon Travel Policy" that more institutions should look at and be inspired by!

I'm part of three of the six project activities, including the train trip as well as an activity that I myself am responsible for - organizing an international workshop in mid-September (more info on that later). I will in fact make two business trips to the continent by train in June and August/September - so I would bring some recent and concrete experiences of extended train trips with me into the project.

Some of the questions we aim to explore in the project are: How can the research community continue to exchange experiences when we can't fly the way we do today? How can we travel sustainably in the future? How can work and travel be better integrated? How can academic culture be developed in an Edu-Rail scenario?

The project is really fun and it fits very well together with my research project "Decreased CO2-emissions in flight-intensive organisations". We only look at (CO2 emissions from) air travel in that project and do thus not spend a lot of time looking at current alternatives to air travel (e.g. trains, video conferencing), but this project represents a really interesting way of prototyping what travel in a low-flying academy could look like 10-20 years from now. Thinking about an academy where we have stopped flying altogether was also the topic of a workshop I participated in back in 2016, "Fly or die", and many wild and exciting ideas came out of that exercise (and are documented in this blog post!).

The Vinnova call for "Future prototypes" ("when the future comes to visit the present") is also very interesting. They describe their call as:

A project ... where Vinnova through new methods tries to understand and visualize objects from a possible future. Together with designers and visionaries, we want to create designs that stimulate dialogue about which direction we are going, and how we get there. The project is about creating future prototypes. Future prototypes are objects from the future visiting the present with the aim of creating thoughts, feelings and discussion about what society we want in the future and the best way to get there.

So some people at Vinnova are having a go at welcoming and encouraging Swedish researchers to do speculative design and we [e.g. the people working at Vinnova and possibly also researchers in the funded projects] "are coached by Elliot Montogomery, founder of Extrapolation Factory and teacher at Parsons School of Design, one of the world's leading organizations in speculative design" (linked 30-minute video by Elliot on "Thinking as a futurist). There is surely an interesting story behind this call - but it's hard to figure out how this came to be without inside info. It's quite clear that some people at Vinnova are very enthusiastic about speculative design and they have even set up a helpful page on "What is speculative design" (machine translated from the Swedish-language page). I very much hope the call will results in a success internally at Vinnova so that they will continue to fund research like this also in the future! I hope someone came in with an application for a Future prototype of Vinnova funding more Future prototypes...

The proposed research project, "Edu-Rail", is led by professor Per-Anders Hillgren who works in the research platform "Collaborative Future-Making":

"The Collaborative Future-Making research platform explores how we can envision inclusive and sustainable ways of living and thriving together. We do this through prototypes and discussions where people from all sectors of society are involved."
The project group consists of eight persons: 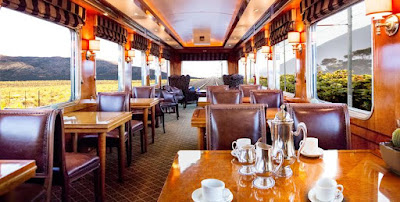 Image: Imagine organizing an academic conference on this train! Perhaps an academic speed dating exercise around two dozen tables? Do note that this is in fact the same train carriage as in the image at the top of the page.
.
Upplagd av pargman kl. 13:27