.
I seem to never catch up but is instead endemically publishing blog posts about books I read half a year ago... This is at least the very last blog post about books that I read last year (2013) and it is also the fifth and last blog post about books that relates to "work" and "the future of work". I read all these books (including the three books below) in preparation for a report I wrote as part of a research project I'm taking part in earlier this spring (here's the previous blog post). 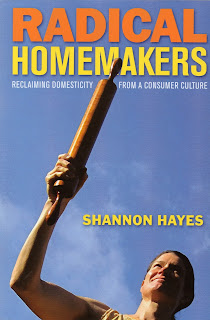 The very premise of this book is going to be controversial - and especially so from a Swedish perspective. There are many "homemakers" (e.g. housewives) the US. I have no idea how many, but many (especially) women stay home when their children are young - at least until they start school. There are several reasons for this and with the costs piling up, it might in the end not make a lot of sense for a US couple who pool their resources to have both parents work in wage labour instead of only one. Or perhaps none? - this is Hayes own story:

"My community and family practiced subsistence farming, food preservation, barter and frugal living as a matter of course. I had been taught in school to plan for  a six-figure income in a dual-earning family [but my husband] and I did the math. We could move away, take on dual careers, get a new house, own two cars to get to work. By the time we subtracted out what we'd pay for commuting, a new house, professional wardrobes, taxes, and buying rather than growing our food, we were only $10,000 ahead in annual income [and] That was before we had figured in the costs for day care. Thus, Bob and I officially joined my parents on the family farm [...] and we became homemakers."

The US homemaker angle of course differs a lot from Sweden where we have state-subsidised daycare and where the norm is for both men and women to work full- or at least part time. Hayes does however confront this issue and she has a bunch of compelling arguments, for example:

"Working alone or with a partner to create a nurturing home is not antithetical to progress. Indeed, in a time of climate crisis, peak oil, and worldwide economic and social unrest, it may be the only thing that saves us. It is possible to be a feminist and to can tomatoes."

From a (very) American perspective, Shannon Hayes has written the book "Radical homemakers: Reclaiming domesticity from a consumer culture" (2010) and it is fuelled by her anger at the way things are and by her hope that they could be different. Hayes has interviewed homemakers who have centered their lives around their families and communities and who consume less, produce more and increase their self-reliance. These are people who want to remake their households into units of production rather than units of consumption. She interviewed 12 couples and 8 individuals and I basically think it's fair to call the whole bunch of informants she interviewed "activists" in terms of their thought and their convictions as well as in terms of their (private) actions. I think the book conveys an important message, not the least because it is represents a perspective that is not very well represented and that is thus interesting in and of itself. Some things feels very strange for me to read from a Swedish context though (even beyond the homemaker/housewife angle):

1) The close connection between her informants and homeschooling - something which is basically impossible/outlawed in Sweden.
2) Consciously opting out of the US health care system ("the health care racket"?) and taking on the responsibility of much of their own health care (e.g. an emphasis on prevention rather than cures and on traditional medicines with respect to local herbs etc.):

"for many reasons, a number of the homemakers pointedly refuse to participate in this system. In a sense, they have become conscientious objectors to the conventional health-care industry. They might not find it hard to pay affordable health insurance premiums if they felt assured that the money was used to help those in need. It is hard paying exorbitant premiums, however, knowing that a significant portion is used to employ a staff whose job security relies upon denying claims by its policy holders. It is also hard to pay high premiums knowing that a portion of the money also goes to support a powerful lobby effort in Washington to fight comprehensive health-care reform. Further, it is ethically challenging to support the for-profit health-care system, because it handcuffs so many American to jobs that do not honor the four tenets of family, community, social justice and ecological health."

On the negative side, the book feels slightly "amateurish". That goes both for the author's ability to weave the individual stories into a greater whole, and to her ability analyse the patterns that emerge into something more and something beyond the obvious. There is too little analysis and the book thus to some extent feels like a pamphlet or like propaganda for a certain perspective on life. I'm sympathetic to that perspective, but the book could have become much more than what it turned out to be. The academic in me leaves me wishing for more analysis to complement the "story-telling" - especially since Hayes herself has a Ph.D. from the prestigious Cornell University. It's however never stated in which subject/discipline she got her Ph.D., so I guess her degree it's not related to the contents of the book in any way. 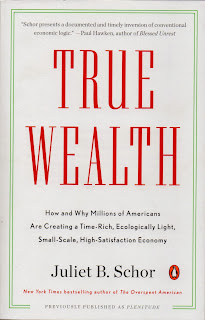 Juliet Schor is a celebrated researcher who often writes about the overlap between sociology and economics. She is most well-known for being the author of the two books "The overworked American" (1993) and "The overspent American" (1999). Her most recent book is called "Plentitude: The new economics of true wealth" (2010), but I guess they changed the name for the paperback edition to sell more. My book is thus instead called "True wealth: How millions of Americans are creating a time-rich, ecologically light, small-scale, high-satisfaction economy".

Schor's book was an easy read, but writing this text half a year later, I realise that beyond the fact that I liked the book, I hardly remember anything at all without having to leaf through the book. That unfortunately implies it was also a relatively forgettable book...  But, here we go.

The 2008 financial crisis erased 50 trillion dollars of wealth and the global economy requires fundamental changes. Schor's book is a proposal for what needs to be done in practice to restructure the economy and her answer is "plentitude" and involves putting ecological and social functioning and well-being at its core. I think Schor's "plentitude" would work fine as a description also of Hayes' "Radical homemakers" book (above).  There are four principles of plentitude:

1) Liberate time from the encroachment of (wage) labour, money and markets. Buy less and accept the following deal; less money in exchange for less work and more free time.
2) Make, grow and do things for yourself whenever possible. Diversify in the direction of self-provisioning and away from 100% reliance on the market to satisfy all needs.  "in a world of ecological and economic uncertainty and distress, putting all one's eggs in the basket of the capitalist market looks like a more dubious proposition."
3) Practice "true materialism", i.e. an environmentally aware approach to consumption. Buy smart, sustainable things instead of participating in perpetuating throw-away society.
4) Restore investments in one another and in our communities. Social capital is a form of wealth that is just as important as economic capital and material goods. 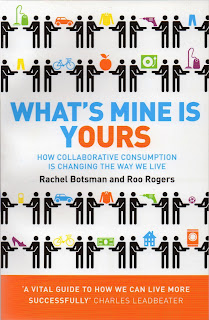 Rachel Botsman and Roo Rogers' book "What's mine is yours: How collaborative consumption is changing the way we live" (2010) is the book about "collaborative consumption". How can we switch from materialism (everyone owning their own lawn mower) to sharing lawn movers, cars (Zipcar, Uber) and that extra room you hardly use in your apartment/house (Airbnb, Couchsurfing)? It's not only great for your wallet, for strengthening human relationships and community, but also for the planet (decrease resource throughput). Much of this is made possible through networked computers and the internet:

"There is now an unbounded marketplace for efficient peer-to-peer exchanges between producer and consumer, seller and buyer, lender and borrower, and neighbour and neighbour.
[...]
cooperatives, collectives, and communes - are being refreshed and reinvented in appealing and valuable forms of collaboration and community. We call this [...] Collaborative Consumption [...] sharing, bartering, lending, trading, renting, gifting and swapping, redefined through technology and peer communities."

As with any "movement", there are a lot of different services (many mentioned/enumerated in the book), many different kinds of people/actors and many different kinds of motivations (including entrepreneurship, sustainability, alternative personal values, pure economic need, and being fed up with "stuff" - including buy-now-pay-later and the subsequent fees for the self-storage facility. That makes the collaborative consumption phenomenon all the more interesting to study and contemplate.

I wrote a blog post half a year ago about my problems with Airbnb, but was happy with the way the issue was resolved and have used Airbnb no less than five times since then (!) to book houses for between one day (weekend in the mountains with my family) and a week (conference in Toronto).

This is a good book, but perhaps with a tad too much "cheerleading" and "evangelism" in it. Collaborative consumption is a great idea, but I'm sure there will be set-backs, backlashes and unexpected rebound effects. If booking a house (apartment, room) though Airbnb is supremely easy and convenient, would that not eventually lead to increased travel? That might then hollow out, or even negate the environmentally beneficial effects of not building more hotels, right? I can however see few negative effects of sharing cars - instead of every family or every person over the age of 18 owning their own car.
.
Upplagd av pargman kl. 23:37