.
My intention is to catch up with writing about books that I've read, but with this blog post I'm instead falling behind: I published my last blog post on "Books I've read lately" 40 days ago - but it took (more or less) only 30 days to read the three books below (for the most part back in December last year).

The books I write about below do not have a huge amount in common except that they in one way or another deal with the topic of "work" and this is the fourth blog post in a row about books I've read on that particular topic (#1, #2, #3). With this blog post, I present two new "inventions" in relation to my book-reading habits. Both of them have to do with the integration between this blog and Facebook:

1) As those who are Facebook friends of mine know, I read regularly (more or less every single day) and I started to post 0, 1 or 2 "Quotes of the day" in my Facebook flow a few months ago. I will "dump" such quotes in these blog posts when I come around to write about the books in question. The very first quote is appended below.

2) The second innovation is that when I post a new blog post here about "Books I've read lately", I will also post a status update on Facebook with a list of the next 3-4 books I plan to read (do note the operative word "plan" - I refuse to be held accountable if I change my plans...   :-). Facebook friends will thus have the chance to synchronise and read the same books I read, as well as the chance to talk about them on Facebook (for example in relation to my now-onging "Quotes of the day" status updates). # End of "technical" information # 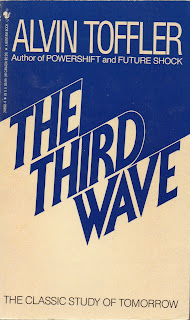 I haven't just read new books about work and about the future of work, but also older books that can give me insights into how they thought about work and the future of work "back in the days". Alvin Toffler's book "The third wave" was written in 1980 and I read it for the first time in the early 1990's.  Re-reading the book now I found that his description of the past and "the present" (e.g. 1980) was much better and more interesting that his wild-eyed sometimes-right, sometimes-spectacularly-wrong predictions about "the future" (i.e. for the most past the past from today's vantage point).

Even though I didn't notice it last time I read the book, and despite the fact that it for the most part is hidden here and there and thus easy to miss for the unaware reader, I now realise that Toffler almost came out as an environmentalist in this book. He is totally aware of environmental and energy challenges - despite his for the most part naive belief that human ingenuity fortunately/hopefully will/would "fix all problems" sometime "in the future":

"This dipping into the earth's energy reserves provided a hidden subsidy for industrial civilization, vastly accelerating its economic growth. [...] Fossil fules formed the energy base of all Second Wave societies" (p.25).

"While Second Wave [industrial] civilization did much to improve the conditions of our fathers and mothers, it also triggered violent external consequences - unanticipated side effects. Among these was the rampant, perhaps irreparable damage done to the earth's fragile biosphere. Because of its indust-real [sic!] bias against nature, because of its expanding population, its brute technology, and its incessant need for expansion, it wreaked more environmental havoc than any preceding age. I have read the accounts of horse dung in the streets of preindustrail cities (usually offered as reassuring evidence that pollution is nothing new). I am aware that sewage filled the streets of ancient towns. Nevertheless, industrial society raised the problems of ecological pollution and resource use to a radically new level, making the present and past incommensurable" (p.120-121).

"Two changes, by themselves, make the "normal" continuation of industrial civilization no longer possible. First, we have reached a turning point in the "war agasint nature." The biosphere will no longer tolerate the industrial assault. Second, we can no longer rely indefinitely on nonrenewable energy, until now the main subsidy of industrial development. These facts do not mean the end of technological society, or the end of energy. But they do mean that all future technological advance will be shaped by new environmental constraints. They also mean that until new sources are substituted, the industrail nations will suffer recurrent, possibly violent withdrawal symptions, with the struggle to substitute new forms of energy itself accelerating social and poltical transformation." (p.122).

For the most part, Toffler's book is a fireworks of (simplified, catchy) ideas (some very insightful, many wrong) - Toffler for example defined the term "prosumer" in this book. I can see how this book would have appealed a lot more to me at a point in my life when the future Toffler writes about was still an unknown entity in front of us - as apart from today when we have to live with the choices made (or not made) during the previous decades. Still, Toffler was very adept at picking up trends and presenting them in funny-mirror-but-plausible ways. And sometimes he nails it, like in the struggle between Second Wavers and the inevitable forces of the future. Isn't this a perfect description of the Tea Party mindset thirtyfive years before they appeared on the scene?

"The defenders of the Second Wave typically fight against minority power; they scoff at direct democracy and "populism"; they resist decentralization, regionalism, and diversity; they oppose efforts to de-massify the schools; they fight to preserve a backward energy system; the deify the nuclear family, pooh-pooh ecological concerns, preach traditional industrial-era nationalism, and oppose the move toward a fairer world economic order" (p.437). 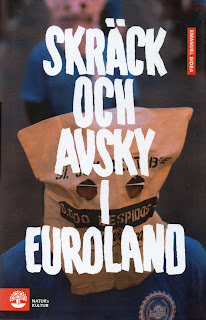 Emanuel Sidea's book "Skräck och avsky i Euroland" (2013) [Fear and loathing in Euroland] is one of a whole slab of books that have been written in/about the aftermath of the European debt crisis. I can't recall why this book in particular made it to my list of to-read books, but this sleek (140 pages) reportage book is anyway the result of Sidea's summer 2012 "road trip" through southern Europe (Athens, Rome, Madrid, Lissabon). It's hard to see a light at the end of the tunnel when Sidea (Swedish economy journalist) vividly describes the same thing that previous books I've read (see links above) have said: there is today not one, but two labor markets in Europe; one for those who are established (that would be me) and another for the young. Middle-age people who are established on the labor market are protected by strong labour laws, while the young have had to settle for short-term contracts and for precariously jumping between different temporary jobs.

"Those who entered the market early have been able to accumulate riches that have clearly not been taxed particularly hard. At the same time, instead of collecting taxes and then making investments, many states have not wanted to interfere with their citizens' lives through raising the taxes - so people have been taxed without them noticing it: by taking loans. Liabilities are notoriously promises to pay [sometime in the future], but with interest having been added. In this case, the debts represent future demands on higher taxes, levied on forthcoming generations. By allowing the older age groups to be less harshly taxed, it has been possible to win elections and stay in power, and to make oneself [one's political party] popular. This is clientelism in action. And now, when the bill appears, it is the younger generations - those who still have many years left before retirement - who will have to pay the debts. ... If all of this feels familiar, it's no wonder. Sweden also suffers from the same problem" (p.69).

This is not a book with a happy end in sight. It would instead not be surprising if the coming elections to the European parliament will see a surge of protest voters flocking to political parties that present a variety of simple alternatives to "Business As Usual". It is easy to see that a Europe that has sowed "passivity, bureaucracy and powerlessness" (Sidea) unfortunately might now come to reap intolerance, racism and xenophobia. 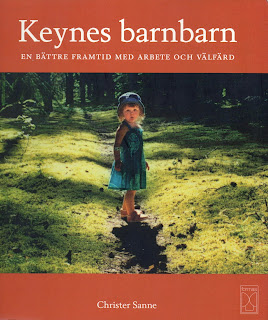 Christer Sanne is an eminently sensible person. He wrote "Keynes barnbarn: En bättre framtid med arbete och välfärd" in 2007 [Keynes grandchildren: A better future with work and welfare]. It is strange that I started to read this book of his back in 2008, but for some reason left the last few chapters unread until now.

The book untangles a yarn of difficult and related concepts in simple, clear language. What is the connection between sustainability, economic growth, (neo)liberalism, work patterns and time use, happiness and consumption? The book pretty much covers all those topics, weaves them together and shows how they are connected. But, the book does even more as it also suggests a way out of the hamster wheel of work, work, work and consumption, unsatisfied needs and unhappiness. The book covers and ties together 1) global justice, 2) ecological sustainability and 3) Swedish welfare society - and it does it well.

My blog post about "monetary intensity of media consumption" from the beginning of the year was inspired by a picture from this book about the energy intensity of a variety of activities. And that's just one out of 100 interesting, provocative or sensible ideas that are presented in the book!

Quote of the day:

"Today's media landscape, with an almost unlimited range of commercial channels, is part of a consumerist society. The constant renegotiation of the social "game" about what is valuable and attractive happens not the least in the media. Newspapers and broadcast media adapt their content to advertisers and owners' interests. My subjective opinion is that we have gone from describing how to cook good food with inexpensive raw materials to presenting exclusive news from all around the world. And from pointing out the value of home-made gifts based on the time and expertise of the giver to instead highlighting the range of fashionable shops. Commercial values seem to have taken over.
...
Independent public information is likely to be overshadowed when even textbooks are sponsored by companies and special interest groups. ... Public service tv and radio channels are therfore crucial, as is the government support for newspapers and magazines. Both the space for broadcast media (the frequencies) and the Internet can be considered a commons. The for-profit use of the spectrum should compensate those who are responsible for the common, be it the state or some other institution."
Sanne, C. (2007), pp.163-164.
Upplagd av pargman kl. 23:37