Books I've read (not so) recently

.
It's been a while since I wrote about books that I've read "recently". My last blog post about books I've read was posted back in November! I have for sure continued to read books since then (as well as before November), so they just pile up and beg to be written about. In fact, one of my new year's promises was to catch up with writing about the books that I have read so that, by the end of the year (at the latest), 'recently' actually becomes recently instead of "recently".

I read the three books below between August and mid-September, i.e. about half a year ago, so I have a lot of catching-up to do. This and (at least) the following four blog posts will treat books that in one way or another relate to the topic of "work". I read these books in preparation for writing a report - more on that in a later blog post. 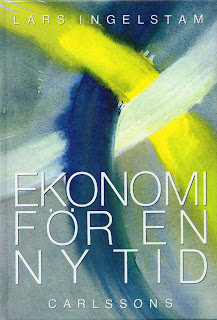 Lars Ingelstam was a professor at one of the neighbouring departments when I wrote my ph.d. thesis and he also gave a guest lecture in one of my courses quite some time ago (> 5 years). I have read one of his previous books before (on a totally different topic).

Ingelstam's "Ekonomi för en ny tid: Lärobok om industrisamhället och framtiden" (1995) ["Economics for new era: Textbook about the industrial society and the future"] treats the the past and the present of economy, time and work (from a Swedish perspective). The one intriguing idea that carries the book (successfully in my opinion) is the classification of work into four broad categories, as well as the ebbs and flows between these categories during the last 100+ years (in Sweden). Ingelstam couples each of the four categories with a colour; yellow for private industry, blue for public services (paid for through taxation), white for all unpaid work (household services, voluntary work etc.) and finally black (and different shades of gray) for the criminal and the "informal" economy.

What makes the book interesting and (still) highly relevant is that Ingelstam is interested in and analyses broad issues such as time, value (not just economic) and social/societal needs and functions. He also pays close attention to the underlaying forces that (for example) led to the large expansion of the blue sector in the welfare state, but that also ultimately slammed the brakes on such developments (in the early 80's in Sweden).

The issue of what tasks are performed in what sector is an ongoing battle; is food prepared primarily within the household or do people "outsource" that service to restaurants? Do (most often) women stay home with their children or leave them in daycare? Do people get their electronic equipment fixed or do they just throw things away and buy new stuff (what is the tradeoff in terms of money)? Do people transport their furniture and then assemble it themselves (yes they do - it's called "IKEA")?

Ingelstam makes heavy use of some texts that were written already in the end of the 1970's (Gershuny, Skolka) that discusses the emergence of post-industrial/self-survice society and I'm very tempted to get them. An underlaying force that has reshaped modern societies is of course the falling costs of production - gadgets have become increasingly inexpensive in comparison to people (welfare services) for many decades (the Baumol effect). This has far-reaching consequences for (the future of) work that cannot be underestimated. I very much like this book as it poses questions that are still, or perhaps even more relevant today compared to 20 years ago when it was written. What is the role of work and of money in provisioning people with welfare (which covers much more than just wealth)? 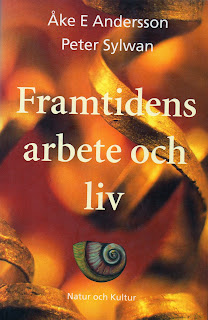 The two authors of Framtidens arbete och liv (1997) [Future work and life] are an economics professor and a science journalist. Åke Andersson led the Institute for Future Studies between 1987 and 1999 and Peter Sylwan worked at a newspaper as well as in Institute projects. That doesn't help much though and this book has aged considerably more than Ingelstam's book since it was published 15 years ago. Many parts of the book felt like 100% pure, unproblematic, gushing praise to "progress" in its many different forms (science, new inventions, more education, more efficient production and basically more, more, more of everything else too). No problem - present or future - is greater than our capacity to solve it - whatever problems turns up. The empirical "evidence" is that things have always worked out this far... This includes environmental problems that are "easily fixed" by the hydrogen society (or the solar power society or something else that will turn up) and by pricing resources better/more effectively. Reading this book felt like reading Voltaire's Candide stating that "all is for the best in the best of all possible worlds", or even more succinctly (and uttered with an Australian accent); "No worries, mate!". Despite a few highlights, reading this 500 pages long tome to blind faith human cleverness and the mighty power of "creative destruction" and "the invisible hand" was on the whole a pretty painful experience. I think that reading Barbara Ehrenreich's book "Smile or die: How positive thinking fooled America and the world" should be a compulsory corrective to reading this book. Limitless hope in the future here becomes a call to do - nothing - and to let technological inventions and economic driving forces (with consequent "automatic" adjustments) take care off all problems:

"As soon as some new void occurs, someone is there to fill it. New roads - be they real or virtual become filled-up with new transports and with [the] current [technological level of] vehicles, we are soon back at the environmental starting point. But maybe that is exactly what is sustainable - a kind of jumping from tussock to tussock or from ice floe to ice floe keeps us afloat when the tussocks overturn and the ice floes sink [my comment: tell that to the polar bears!]. In this, the transportation systems' long-term sustainability problems would resemble all other social problems. Perhaps permanent solutions never exist - there are never any final solutions - just the ever temporary solutions' seemingly stable states. Whoever believes in final solutions is fooling himself and possibly becomes more dangerous to his surroundings than the problems he claims to want to deal with." 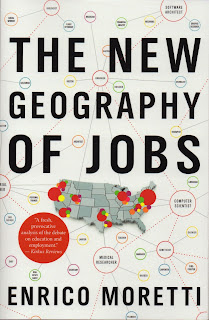 Enrico Moretti is a professor of economics at the University of California, Berkely and his book "The new geography of jobs" (2012) describes the (accelerating) divergence of different part of the US. Some parts are "the brain hubs" that grow and add a lot of good jobs, other parts (that traditional centers of manufacturing) are the spiralling down, down, while some other parts are finally verging somewhere in-between. Education is a factor of outmost importance as the stakes and the distance between the winners and losers increases. Moretti's scientific articles have really boring titels ("Workers' education, spillovers and productivity: Evidence from plant-level production functions") so it's pretty clear that the book is a popularisation and a makeover of his (and others') research. I do get the feeling that he over-stretches though and says things that aren't necessarily supported by his research. This is something that can easily happen if there is pressure from the book publisher to find and push for a "big idea" that can sell the book.

Moretti states that there is a "multiplier effect" at play; for every good job in the high-tech industry, another five jobs are created outside the high-tech industry (i.e. doctors, lawyers, roofers, baristas and yoga teachers). While this is extremely beneficial for dynamic areas like Seattle, San Fransisco and Boston (the multiplier effect for traditional manufacturing was only around 1.6), I still can't get it all to add up. I don't understand if Moretti assumes that the good jobs are limited (with cities competing against other cities, regions agains regions and countries against countries) or if there is a potentially unlimited number of good jobs as well as passable (multiplier-created) jobs in the global high-tech industry? Just as with Andersson & Sylwan, Moretti doesn't see any problems on the "global level" (not his line of research), but he does see a Great Divergence creating winners and losers in the US and on the local level (often living within a hour's drive from each other). I can certify that from personal experience: Irvine where I live is very affluent and safe while there are other areas within a 15-minute drive with rundown storefronts and quite a few homeless people resorting to begging on the streets.
.
Upplagd av pargman kl. 23:54