.
I wrote a blog post only two weeks ago about books I've read recently and that's a good thing because I've got a lot of catching up to do. I read the three books below between mid-September and mid-October (half a year ago). These books (again) treat the topic of work and this is the second blog post in a row to do so. 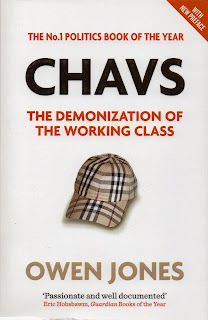 It seems Owen Jones book (2011) "Chavs: The demonization of the working class" came out at a "fortuitous" moment - right before the 2011 England riots when widespread rioting, looting and arson took place in many different cities around England. This apparently catapulted Jones and his book into the limelight (interviews, television etc.), but this is something I only learned when I started to read the (reprinted) book and the new preface.

I understand that "chav" (and "chavette") is a derogatory term, but I have to admit that I have few connotations to these terms. I have seen the movie Eden lake with its ordinary, decent middle-class couple being assailed by the teenage uneducated  almost-feral underclass chavs. They were portrayed a little like H.G. Wells' Morlocks, emerging at dark and attacking the innocent, good-natured "ordinary" middle-class folks. Wikipedia tells me that "The Oxford Dictionary defines Chav as an informal British derogatory [term] meaning a young lower-class person who displays brash and loutish behaviour and wears real or imitation designer clothes". I would say that Jones book is primarily a book about class warfare (where the upper and middle classes wield all the weapons):

"It is both tragic and absurd that, as our society has become less equal and as in recent years the poor have actually got poorer, resentment against those at the bottom has positively increased. Chav-hate is a way of justifying an unequal society What if you have wealth and success because it has been handed to you on a plate? What if people are poorer than you because the odds are stacked against them? To accept this would trigger a crisis of self-confidence among the well-off few. And if you were to accept it, the surely you would have to accept that the government's duty is to do something about it - namely, by curtailing your own privileges. But, if you convince yourself that the less fortunate are smelly, thick, racist and rude by nature, then it is only right they should remain at the bottom. Chav-hate justifies the preservation of the pecking order, based on the fiction that it is actually a fair reflection of people's worth."

Jones text is a book-long speech in the defence of ordinary working-class people who are squeezed between forces they don't understand and can't affect, including globalization that melts away all the "good jobs", immigration that pushes down the wages and makes hollowed-out working conditions possible, oppressed by politicians and finally downtrodden and taunted by a corps of prejudiced and largely middle-class journalists who are "waging a war" against the working class in media. Jones makes it out to (almost) be a conspiracy to destroy the once-proud working class - and it's all Margaret Tatcher's fault originally as she pulled the plug and released the neo-liberal hounds that have haunted Britain ever since.

I was less interested in the book because of the "political" side of it (it's very much a book about Britain) and more interested in Jones' description of the actual working and living conditions of the former British working class who nowadays are trying to scrape by, working in call centers and retail (e.g. supermarkets etc.), but who for the most part seem to be trampling water but still slowly sinking. The number of UK factory jobs have for example been reduced by almost 2/3 in three decades and this is not just an economic blow to local communities, but a blow to a way of life and to working-class identities and culture:

"I grew up in Stockport [...] People grew up with each other; mixed groups of families and friends would do things together, like watching football in the pub; and people felt rooted in a community that they and their families had lived in all their lives. [...] Entire working-class communities used to be based around a particular factory, steelworks, or mine. Most of the men would work at the same place. Their fathers and their grandfathers may well have worked there and done similar jobs. When industries disappeared, the communities they sustained became fragmented." 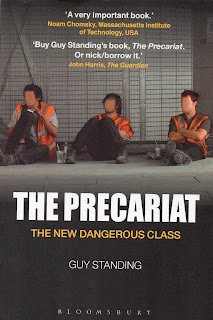 Guy Standing's (2011) "The precariat: The new dangerous class" describes a hodgepodge non-class who might (or might not) at some point become a class (with common interests and goals). The precariat is a neologism that combines the words "precarious" and "proletariat" into "an emerging class, comprising the rapidly growing number of people facing lives of insecurity, moving in and out of jobs that give little meaning to their lives". The precariat is the flip side of globalization and of businesses constantly striving for increased "flexibility" (wage flexibility, employment flexibility, job flexibility, skill flexibility). What "flexibility" does is that it transfers business risks and costs to workers, and, with the world seemingly in constant flux, puts a lot of pressure on individuals. My question is 'what is this doing to their personalities and their world views?'

"In essence, the flexibility advocated by the brash neo-classical economists meant systematically making employees more insecure, claimed to be necessary price for retaining investment and jobs. Each economic setback was attributed in part, fairly or not, to a lack of flexibility and on the lack of 'structural reform' of labour markets. As globalisation proceeded [...] the number of people in insecure forms of labour multiplied".

Young, university-educated 30-somethings who have never had a permanent job and who instead jump from one temporary job to another, scrambling to land on their feet at ever jump/to not fall in the widening cracks of a rapidly dismanteling social system - that's the precariat. To always have to scramble and start anew means that there is little coherence and also scant material available to spin a narrative of their own lives that has both direction and progression. Insecure conditions and variable salaries also means that it is hard to plan ahead, to set out and buy an apartment or to plan for forming a family and having kids. Actions and attitudes drift towards opportunism and "there is no "shadow of the future" hanging over their actions".

This is the plight of an increasing number of persons - not just university-educated 30-somethings but also those without a degree from an institution of higher education as well as immigrants and the elderly. The term "precariat" and exactly who belongs to it is at times so inclusive that it hard to pin down and to understand the limits of the term (which would also seem to make i hard to mould a class from that most diverse of "materials"). The precariat seems to encompass people who, for the most part unwillingly, have (a sometimes long string of) temporary and part-time jobs.

Despite some sloppy categorization, I did find Standing's book interesting and thought-provoking and I'm quite sure that he's on to something in terms of noticing a number of important societal trends lurking under the surface. He's good at pulling many things together and his book awakens many thoughts, but he could have spent more time tying it all together into a stringent, coherent whole. 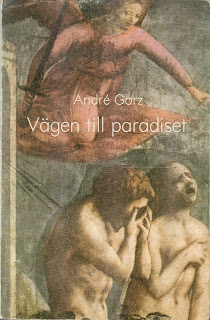 For my 20th birthday, my friend Sören gave me André Gorz's (1983) (predictably out-of-print) "Vägen till paradiset" [Les Chemins du Paradis/Paths to Paradise]. I read it, and understood perhaps half of it at the time. The book was indeed much better this time around, and, many ideas that "radicals" might believe are recent, were in fact already treated by Gorz 30 years ago in this or in some of his other books (for example in "Farewell to the Working Class" (1980), "Critique of Economic Reasoning" (1988) or "Reclaiming Work: Beyond the Wage-Based Society" (1999)). I would (for example) say that Gorz pretty accurately identifies the underlying forces behind the emergence of the precariat when he says that as the costs of automation decreases significantly "Those permanently employed will become a thin privileged layer besides an enormous mass (30-50 percent of the active population) of unemployed".

As apart from the gloomy books above, Gorz is a free thinker who dares to "think the impossible". While his ideas might indeed be "impossible" - politically and practically if not in theory - it's like a breath of fresh air to encounter so many new, seldom-hearx and perhaps even at time contra-intuitive ideas in such a short book. The actual book is only slightly longer than 100 pages, but another 5 essays (80 pages) have been bolted on to it. It is, to Gorz, quite clear that the need to work will decrease as production will continue to get automated, and he criticises the political left for lacking imagination to think "outside of the box". The single biggest idea in the book is a proposed lifelong basic income in exchange for 20 000 hours of work. He quotes the French "philosopher, law professor, sociologist, lay theologian and Christian anarchist" Jacque Ellul who said that "We need to radically change our way of thinking and our general direction. It's what you would call a revolution. If you tell me that that is utopian thinking, I will answer that what is utopian is to believe that things can go on like this".

Gorz can at times write in a slightly cumbersome way that I associate with French (academic) authors and it is of course also a little difficult to read a 30-year old book that uses lots of contemporary examples and numbers to support claims that was written at a time when the world looked very different from today (the cold war etc.). Despite this, there are many gems and deep insights hidden in (sometimes) semi-cryptic formulations and reasoning. One quote of Gorz' that made a huge impression on me the first time I read the book and that really drove home the idea of huge global inequalities is: "A Norman pig or cow, a Parisian cat or dog has greater purchasing power than landless farmers in the third world". I might add that a western car also has a greater purchasing power than the majority of people on Earth. According to Wikipedia, it was estimated that 2.7 billion people lived on less than $2 per day in 2008. We for sure spend a lot more than $700 per year taking care of and pampering our cars, right? It turns out it wasn't Gorz who said it, he actually only quoted the aid organization Frères des Hommes - but I have never ever forgotten that quote and the pictures of extreme inequality that follows from it.
.
Upplagd av pargman kl. 17:25