.
The past week was a busy week; a lot happened and this is my third blog post for the week (which is very unusual). Friday this week I (finally) held my formal "Friday Informatics Seminar" here at UC Irvine. I originally got a slot for the beginning of May but would have wanted to give my talk earlier, in the beginning of the spring (February or March). That didn't happen and it then turned out that the slot I had at the beginning of May was on the very same day I came back from the CHI conference, but I only found out about that after I had booked my plane tickets to Toronto. That's kind of a pity as I would have hoped that my talk would have led to conversations and acquaintance with people I didn't know, but as things stand, the term is starting to wind down and I gave the second to last seminar before the summer. Here's the actual invitation to my talk:

Abstract: Many of us take for granted that the future can be extrapolated from the present and the recent past, and, that the future is based on a narrative of expanding borders, scientific progress, growing economic prosperity and human wellbeing, i.e. "a world of possibilities". Developments in the wake of the 2008 financial crisis are seen as a temporary setback and the idea of scientific and economic progress in small incremental steps "forever", or at least for a foreseeable future, is part of the fabric of the grandest of our modern narratives and of the very operating system of modern societies. This perspective is particularly prevalent in a discipline like computer science due to decades of stellar developments and exponential growth of various kinds (Moore’s law, Metcalfe’s law, Bell’s law, Kryder’s law, Koomey’s law etc.).

But, what if this future will not come to pass? A competing up-and-coming narrative, that of “a world of limitations”, suggests that we will bump into various non-negotiable limitations during the 21st century. Possible limiting factors include (but are not limited to) climate change, peak oil (energy crunches), ecological crises, pollution, species extinction, overpopulation, scarcity of phosphates, limitations on food production and/or large increases in food prices, overfishing, water scarcity, economic recession/depression (unemployment, underemployment, jobless growth) and social instability. And please let’s not forget the climate refugees that will come knocking on our door (IPCC 2014)! We have, in the worlds of ecological economist Herman Daly, moved from an “empty world” to a “full world” and we accordingly need to move from searching for answers to current and future problems in “empty-world economics” (”a world of possibilities”) to “full-world economics” (Daly et. al. 1991, Daly 2005). Full world economics take limitations into account and these limitations will, among other things, render further economic growth impossible

What would be the possible consequences of such a scenario on computing?


Bio:
Daniel Pargman is an assistant professor in Media Technology at the KTH Royal Institute of Technology (Stockholm, Sweden), School of Computer Science and Communication (CSC), Department of Media Technology and Interaction Design (MID). He is the team leader for the MID for Sustainability (MID4S) research team as well as a member of the management group of the interdisciplinary KTH Centre for Sustainable Communications (CESC). Daniel has a mixed computer science/social science background and a ph.d in communication studies with specialization in human-machine interaction. Daniel has, over the last five years, become increasingly interested in sustainability and "collapse informatics” - "the study, design, and development of sociotechnical systems in the abundant present for use in a future of scarcity" (Tomlinson, Silberman, Patterson, Pan and Blevis, 2012). Daniel is currently (Jan-July) visiting UCI/ICS and the UCI Center for Research in Sustainability, Collapse-Preparedness & Information Technology (RiSCIT). His academic blog can be found at: http://danielpargman.blogspot.com.


I didn't prepare a lot for the talk, but that's just because I've given 90% of the talk several times before. For the most part I just rearranged and updated my deck of slides, but I heavily rearranged/updated some slides and I did create a few brand new slides of which this was the most significant: 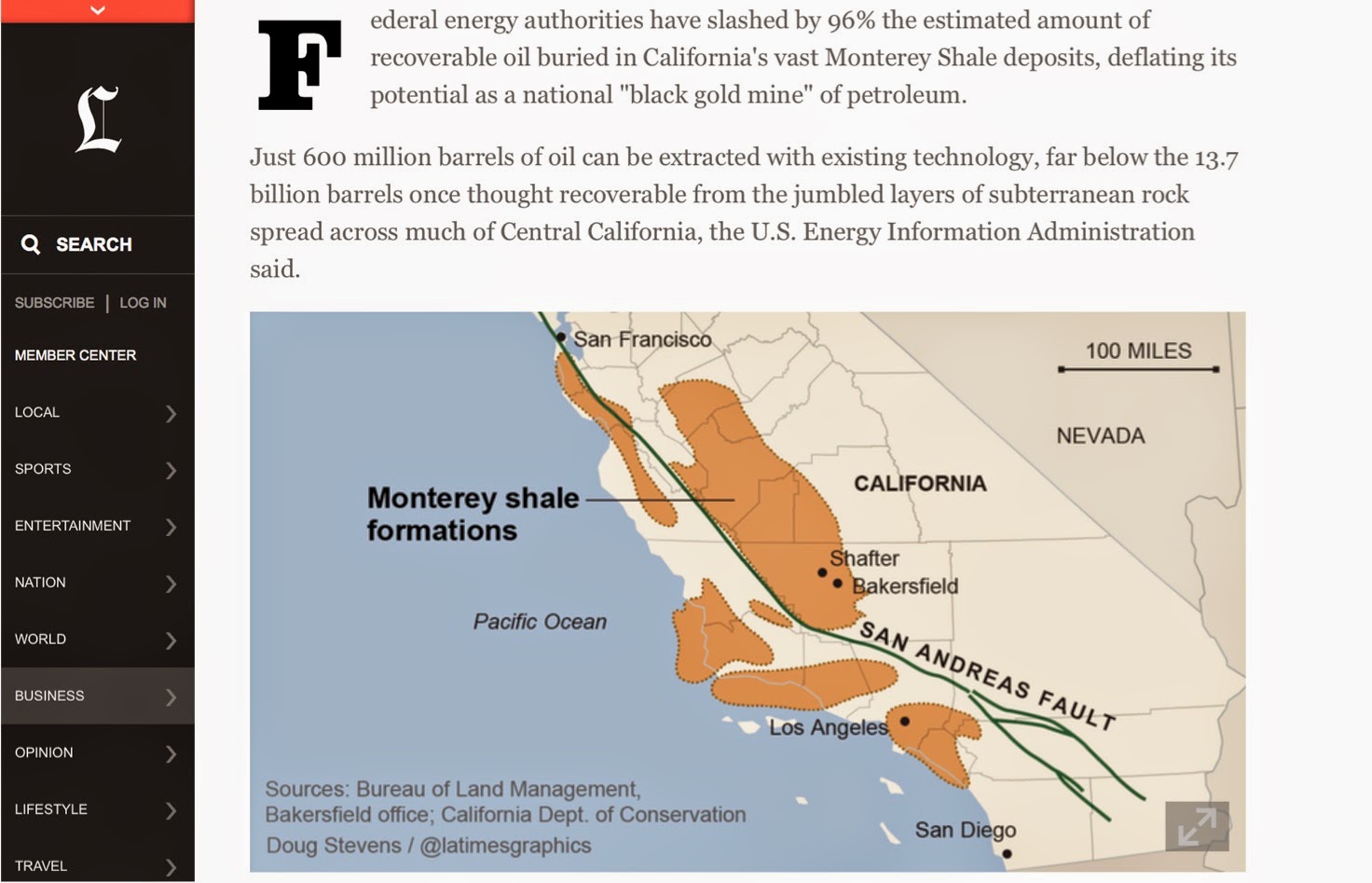 It turns out that the U.S. Energy Information Administration (EIA) drastically reduced its estimate of recoverable oil in California’s Monterey shale formation from 13.7 billion barrels to 0.6 billion barrels only 10 days prior to my talk. That's a 96% write-down (!) and this is big news - despite the fact that it for the most part wasn't reported or forgotten already the day after, on May 21. How many of you (who read this blog post) knew about it for example? Here are a couple of quotes from the article in the LA Times:

- "The new estimate [...] is a blow to the nation's oil future and to projections that an oil boom would bring as many as 2.8 million new jobs to California and boost tax revenue by $24.6 billion annually."
- "The Monterey Shale formation contains [e.g. was assumed to contain] about two-thirds of the nation's shale oil reserves".

The write-down of the California shale oil reserves also means that 60% of the US shale oil reserves disappeared last week - and this was an important part of the great US hope of "energy independence" that has been touted during the last couple of years. I don't know how much the US should mourn the loss of it's "energy independence" as that too for the most part was a pipe dream that was never meant to be as it has never been very realistic in the first place. Compared to the global consumption of oil (around 30 billion barrels of oil per year), the erroneous California shale oil pre-writedown estimate (13.7 billion barrels of oil) is equivalent to less than half a year of the annual global oil consumption. The remaining 0.6 billion barrels are equivalent to about 7 days of global oil consumption (we burn 1000 barrels of oil/second globally), or, a month of US oil consumption. That's the big picture and it does not look very promising.

My talk treated the implications of these grim developments on computing. What will we have (and not have) in the future, and what should we do (in computing) now? To tie this back to the question posed by Richard Heinberg in the previous blog post, "will we have the Internet [e.g. an infrastructure for computing and communication] also if/when societies become less affluent [in the wake of peak oil/peak economy]?". That is indeed the million dollar question and a good way to work on finding an answer to that question would be to fund mine and some other people's research, since we want to work on that question and work out a Plan B for an "Internet for hard times"!  :-)

As to the talk itself, I think it want fine and my wife says it was excellent. Other people also expressed their appreciation at the reception after the talk (note to self: KTH should also do receptions after talks). But why trust my word for it when you can check it out for yourself? It turns out the talk was taped and it will be published on the UCI/ICS homepage a couple of weeks from now. I will make sure to link to it and to update this text when the talk is available online - my guess is that it will appear on this page, but that still remains to be seen. Two people I've been schmoozing with for the better part of the spring term said they've "never heard me be so serious before". This comment was interesting as I didn't feel I said anything different compared to what I usually say, but then I realised we don't have any coffee breaks here and that's of course when you really get to know other people, right...?

PS (just a few days later). Here's a good text from The Guardian (UK) about the "disappearance" of the shale oil that I wrote about above.
.
Upplagd av pargman kl. 23:39