.
This is the fourth time I compilate annual statistics about the blog. As with many other things, that just didn't happen last year (due to my blog absence) but I have done it three times in a row before that (here are the blog statistics from 2014).  Two years ago I had published 320 blog posts, one year ago I had published less than 30 additional blog posts, but now I'm closing in on 440 blog posts and I suppose blog post #500 will be published sometime this coming summer.

The number of visitors shrank last year for natural reasons (little activity on the blog), but 2016 would have been "up there" if not for the abysmal Q1. The huge uptick in December is due to the fact that I published a massively popular blog post just a few days  before Christmas (my 3rd most popular blog post ever). 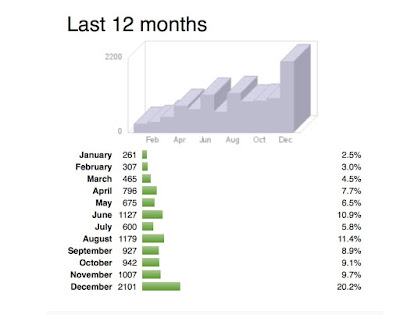 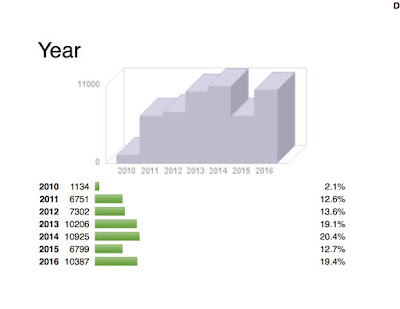 While the image above comes from one counter (GoStats), the numbers below come from Google and they show a quite different picture as to how many people visit the blog. I don't know how to reconcile these numbers and don't know why Google registers a lot more visitors than GoStats do. From the Google numbers it looks like 33% of the traffic ever has been to blog posts published during 2016, while GoStats says total traffic in 2016 (to all blog posts ever published) is below 20%. There is obviously something weird going on with Google's counter, but I will below stick with Google's numbers because I don't have any other: 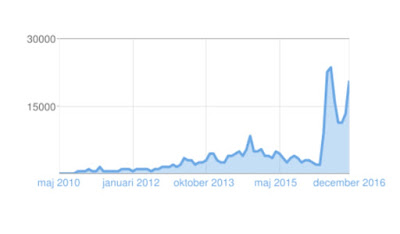 It gets crowded right below the list's cut-off point, there are for example an additional 11 blog posts above the magic number '1000'. It is interesting to note that a blog post like "Future of Magazines - invitation to final presentation" was number 5 on the list two years ago and despite rising from 900 to 1069 views still didn't make it to this year's list (is was in fact number 16). The number of page views necessary to make it to the top-10 list has risen from around 200 in 2012, to 400 in 2013, to 800 in 2014 and to 1150 now (also taking into account that the list has grown from top-10 to a top-14). At the other end of the scale, I see that the bottom 10 blog post (32-53 reads each) were all published back in 2011 and 2012. While newer stuff gets read a lot, older stuff doesn't unless there is a compelling reason. In fact, blog posts published as late as in November 2016 typically has 300-400 page views, blogs posts published in October typically has 450-550 page views and blog posts published in June-August typically has 900-1000 page views. I have no idea exactly where these readers (or "readers") come from. Is it robots/spiders indexing the blog? Something else?

While the blog seems to get read quite some, it is for sure not getting commented. There are only 28 comments altogether on the 91 blog posts that were published in 2016 and I guess at least a third of them are my own comments (e.g. answers to others' comments). In fact none of the latest 38 blog posts has garnered a single comment. This is very much a one-way medium of communication, not the conversation or discussion it could be and I guess everybody is busy chatting on Facebook and elsewhere.

Two years ago only 28% of the blog posts had been read 200 times or more. That number has now climbed to 69%. Of the 319 blog posts that were published until the end of 2014, 58% has been read more than 200 times and the corresponding number for blog posts from 2015 and 2016 is kind of like 97%, i.e. only the last few blog posts (from December 2016) has not yet had the time to get that kind of readership. It in fact seems impossible for a blog post not to get read 200 times nowadays and that number is usually multiplied a few months later.
.
Upplagd av pargman kl. 19:33