.
My colleague Ulrica Bohné presented her licentiate thesis in Human-Computer Interaction at the beginning of the week. A licentiate thesis is sort of a half-way ph.d. thesis. The title of the thesis is "Exploring the intersection of design, reflection and sustainable food shopping practices: The case of the EcoPanel". I have had a formal role in the process by being the "internal examiner" of the thesis. That means I read a draft of the thesis three months ago and took on the role of the opponent at an internal seminar where I gave feedback on main weaknesses as well as suggestions for improvements. I am right now participating in a research project that works in the intersection of food, sustainability and ICT and Ulrica worked in the preceding research project, "From data to sustainable practices". Her licentiate thesis presents results from that project.

That research project started with the fact that a grocery chain has a lot of detailed (aggregated) data about their customers' shopping practices, but the customers probably have only vague ideas about their own shopping behaviours. So how can that data be presented to customers in such a way that they get feedback on their food purchases in general and on their purchases of organic foodstuffs in particular? The idea behind the EcoPanel is that there is a gap between attitudes and behaviours; many people want to buy organic food but, they may believe that they do so to a higher extent than they actually do. By providing feedback on (ecological) food purchases through the visualisation of their shopping practices, the EcoPanel provides the possibility for reflections and insights that then has the potential to change habits and decrease the gap between consumers' attitudes and behaviours: 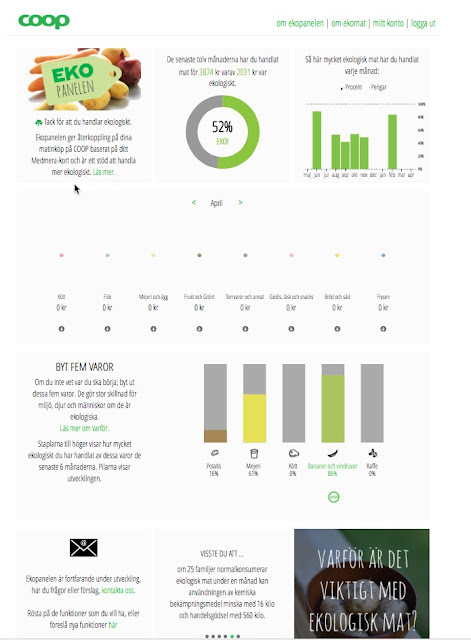 Screen shot from the EcoPanel


The concrete work in the research project was done in cooperation with one of the largest grocery chains in Sweden, COOP, and the EcoPanel must be regarded as a success since COOP, after the research project was finished, has chosen to continue to work with the EcoPanel. Ulrica tested the prototype with 65 users for 5 months and COOP has taken it to the next level by testing it on many more users (COOP employees). COOP's goal is to launch the EcoPanel to their customers sometime in the second half of this year.

Ulrica's research questions in her theses were:
1) How can food shopping be framed and understood to contextualise the role of the EcoPanel as a tool for reflection?
2) How can the EcoPanel, a prototype driven by sustainable grocery data, be designed to be as relevant and accessible as possible for the user?
3) In what way does user's access to their individual sustainability data provided by the EcoPanel affect their food shopping practices?
4) How can SPT [Social Practice Theory] be useful for design practice?

Some questions that I raised three months ago came back as the opponent, Pelle Ehn, asked the same (or similar) questions. Ulrica has chosen to use Social Practice Theory (SPT) as her theoretical framework and Pelle asked "why?". Why that theory in particular rather than other possible theories that also looks at practices. He mentioned some examples including his own work from decades ago, the works of Lucy Suchman, Kari Kuutti, Yrjö Engeström (Activity theory), Latour (Actor-Network theory) and others. He especially stressed the work of Jean Lave who has studied customers' practices and decision-making processes when buying food in the supermarket (as described in her book "Cognition in Practice") and Pelle could furthermore have mentioned Edwin Hutchins' work on "Cognition in the Wild". While I asked Ulrika what SPT is good for in general and what it is good for in Ulrica's thesis more specifically, Pelle asked about the usefulness of SPT in relation to other theories that have been used to study practices. I for some reason hadn't though about that particular question - despite being versed in many of the perspectives he mentioned.

Pelle also asked about the research method Research through Design. The EcoPanel is obviously an example of good product development, but is it really an example or Research through Design, and, is it really research in the first place? This question lead to an interesting discussion about the difference between product development and (design) research. Ulrica mentioned that if she had worked at COOP, any and all discussion concerning the EcoPanel would also have been discussions about its commercial effects rather than also raising other (research) questions pertaining to sustainability and to opportunities for reflection and behaviour change.

As to opportunities for reflection, Ulrica has a wonderful image in her thesis about factors that affect food choice (below). I love that picture. It's a pity she did not make better use of the picture! I believe this was a "map" she created early on to aid her own understanding of the area in question and that's that. The most ambitious use of the (contents of the) image would have been to choose to lift some of the factors into the studies themselves. Another use would have been to make better use of it in the thesis by raising (discussing) some of these factors. Perhaps we can make good use of the picture in the current project at some point? 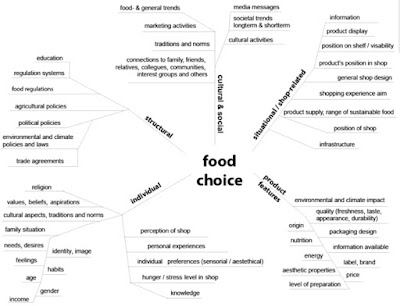 
Lastly Pelle also raised a question that was hard for Ulrica to answer. Explicitly referring to Collapse informatics, Pelle asked "what if small individual behaviour changes aren't enough to "save the planet"?". What if, so to speak, "sustainability isn't enough"? What if the way we frame sustainability is not good enough to "save the planet"? This was a tough question and Ulrica had problems answering it beyond "we all do what we can". I wondered where that question came from before I realised that Pelle Ehn was Anders Emilsson's ph.d. advisor. Emilsson's 2015 ph.d. thesis is called "Design in the space between stories: design for social innovation and sustainability – from responding to societal challenges to preparing for societal collapse".