.
I have moved. It's not very dramatic, I'm still att KTH and I'm still in the same house but I moved from the sixth floor (Department of Media Technology and Interaction Design, MID) to the fifth floor (Center for Sustainable Communications, CESC) last week. I'm still employed at MID but I'm "stationed" at CESC.

In other ways the move has been somehow dramatic. My room was crammed with papers and books that I have collected over a period of 15 - 20 years. I have up until now thrown few things (hardly anything) away since I started my ph.d. studies back in the pliocene. But now I did. Since I'm now sharing a room with two other researchers (who will be there 2-3 days/week each), I had to rid myself of upwards to 20 years of detritus. I believe I have gotten rid of perhaps 75% of all the papers and articles I had collected. While it's nice not to be weighed down, the sorting went just a little too fast and I have a vague feeling that I threw away a little too much - "This was a good article, I'll keep it" vs "I've read this article but can't remember it (at the moment) so out you go". As can be seen, I don't really fill up my new bookshelf so I now experience some "phantom pains" at having been a little bit too ruthless. 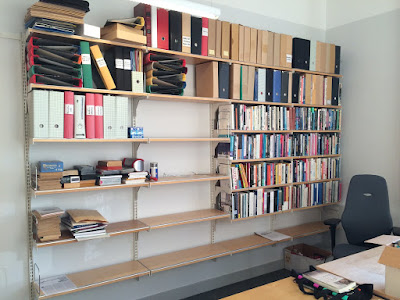 Still, you can only entertain so many paper and articles. At some point, you know you have read something, but you can't find it and in the end have to print a new copy - which sucks. Or, you know you have some notes "somewhere" but - for all practical purposes - can't and never will find them. I even threw some books out - primarily books that had been given and hadn't read. I did keep all the books that I have read though and the books that I have read during the last five years (all documented in this blog) are stacked so that people who pass by in the corridor can see them. At my current pace, I add 2-3 books to these piles every month. 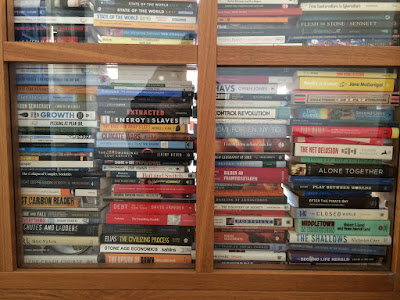 Some things got lost in the move. I will have to order a new charger for my computer. For now I have to carry my charger back and forth between my home and my job. Some other things were lost, but have been compensated by long lost stuff being found... :-)

It has been very easy to throw away old seminar notes and notes jotted down at conferences I attended 10 years ago. Those types of notes have nowadays been replaced by this blog. I write a blog post every time I attend a conference or a particularly noteworthy seminar. What doesn't make it to the blog is, if not "forgettable", at least not something I in all honesty would take the time and effort to go back to and look up at some later point in time. This I have learned from experience; I'm pretty good at taking notes but I'm not so good at later looking at (or indeed looking up) these notes. Despite preferring to take notes on paper, I have nowadays shifted to jotting down notes in a draft blog post for later conversion into a real blog post.

The major difference and the main reason for my move is that I now have new colleagues. I'm surrounded by people who are first and foremost interested in sustainability (and computers). I knew them before but will now sit with them and meet them on a daily basis. I will have lunch and spend my coffee breaks with them. I will have other conversations and other types of conversations. It will probably have an impact on what I write about on the blog. My previous colleagues sit just one floor above so they are still nearby and me and the other MID expats have promised to visit often.
.
Upplagd av pargman kl. 18:24