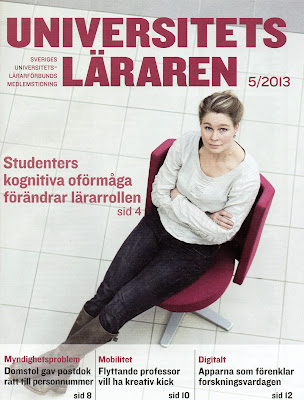 You might think the title of this blog post is bordering on the slanderous, well think again because I didn't choose it. It's the cover story in my union magazine "The University Teacher" (20 000 copies in print); "Students cognitive inability changes the teacher's role". And the term "cognitive inability" is used descriptively.

The article reads like a joke. I think we got the latest issue in the mailbox on Friday and I had to check the calendar, but no, it can't be an April Fool's joke since it's 10 days to early, right? And they would never have printed the April Fool's joke on the cover because that's way too obvious, right?

My number one most-read blog posts ever was published two years ago and is called "Can a student fail at a Swedish university?".  A high-traffic blog linked to it and drove people here in the hundreds. I wrote about problems in my daily practice with, let's say, "under-performing students". It spells out my position and I think I even succeeded in being both realistic, diplomatic and pretty empathic too in that text. "Severely underperforming students" are fortunately a rare problem in my everyday life at KTH.

This article describes a problem that is 10, or perhaps 100 times worse. The articles itself is called "Students at the level of 13 year-olds demands new ways of working" and the teaser continues "How should university teachers, without sacrificing academic quality, teach students who can't read, can't make themselves understood through written language and who have problems understanding simple instructions?". My counter-question (in line with the blog post I wrote way back) would of course be "what do these people do at a university in the first place?"

I'll refrain from expressing my own opinions for a while and will instead quote liberally from the article (here's the original text in Swedish). The article expresses the opinions of Ebba Lisberg Jensen who has a Ph.D. in human ecology, is an assistant professor and also program coordinator at Malmö University. The article is brimming with shocking quotes, so the lists goes on for quite a while:

- higher education now has to deal with an epidemic spread of a lack of knowledge and skills [on behalf of students]
- [Ebba] emphasizes that it is definitely not about teachers requiring advanced academic language or "older" traditional dissatisfaction with youth language. These are not students with dyslexia or those who do not have Swedish as their mother tongue. [...] she describes something completely different; students with a non-existent sense of what the written language should look like.
- There are those who, to take two examples, do not know that a sentence begins with a capital letter and ends with a period. The teacher must decide where sentences begin and end.
- The language becomes Lego bricks, they have a difficult time to read, to think and to write in their own words, and the practice of learning is gone. We can talk about cognitive apathy, a cognitive gap. One can not, and therefore it becomes impossible.
- three-four years ago, deficiencies that had been rare exceptions among individual students became increasingly frequent.
- Last fall, she and her colleagues were forced to flunk two-third of the students on the exam in an introductory course, "and we were still nice [passing as many as one-third of the students]."
- If university teachers ask their students to give three examples of something, they may get eight or fifteen examples back. Not to show that they can (the examples are not necessarily correct), but rather because many are unable to limit themselves.

- She does furthermore not interpret it as these students making some kind of rebellion [statement] against, for example, the scientific forms, but rather as an inability to learn.
- Substantial problems with a text that really disturbs the experience of reading the text in question will often remain even after the teacher has explained [what needs to be done] both verbally and in writing. An assignment can be re-submitted many times, without the student correcting what is wrong.
- From having been a demanding, but creative and free profession, the job of a university teacher has become something different. They risk losing the power over their profession if higher education merely comes to be regarded as a product that universities should deliver, a product without intellectual challenges.
- But you can't just wish it away, there are those [students] who in addition to severe problems with the course contents, assumes that the teacher will provides them with timetables for the buses and with other everyday problem solving, students who will be appalled and offended by criticism and by not getting "help".
- Many students are just not accustomed to face discomfort. We also notice the role of parents, those who call us and explain why their son or daughter did not arrive in time for the [course] enrollment.
- Many have great self-confidence, but low self-esteem. Some demand explicit positive feedback, even when it is obvious they have submitted something sub-par in great haste.
- As for her own behalf, Ebba Lisberg Jensen sees explanations in a school system the believes it is enough to give the students a number of books for them to learn.
- When [Ebba] was a student (in the 1990s), you were one of a mass of students up until C- [Bacherlor's] and D-[Master's] level studies. But that does not work [now], students nowadays must have a direct relationship with the teacher, from the beginning. We need to support, assist and coach. It is time to rethink higher education. The question is how we do it, without letting go of the academic content?

Ok, shocking as it is, I have to say that this is not my reality. Fortunately. I believe that the students Ebba refers to don't ever bother applying for an engineering degree from KTH. And how could they if (as Ebba implies) they think that 3 might very well equal 8 or 15? So I don't know how true this picture of "higher" education in Sweden is. To people reading this text - can you corroborate? Can it really be as bad as as what Ebba describes where you're at? Or even halfway close? (It's ok to answer anonymously...)

Second, if I felt this was a fair description of the place I was working, I'd seriously consider a rapid change or career paths. I have a hard time seeing the difference between being a "university teacher" of such students and of being in one of Dante's circles of suffering. Seriously. The only problem I would have is determining if this was just the first circle of hell, or if it was worse than that.

Searching the web, I of course found others who disagree with Ebba. The Chairman of the Swedish National Union of Students (SFS) doesn't disagree head-on, but he prefers to point at university teachers' lack of pedagogical skills (!). Yeah, right. Well, he does correctly point out that teaching skills systematically get sidelined on behalf of research skills in terms of university professors'/teachers' careers and salaries and all that, but while that is correct, what does that have to do with the experiences and problems Ebba describes above? Does he imply that she is only "experiencing" these problems because she and her colleagues are not skillful enough in their role as teachers? That's hard to believe.

Well, I was a lot more upset and indignant when me and my wife read the article the first time around Friday night. Now, the second time around, it feels like a bad dream or an urban legend. Or an April Fool's day joke on me. Let's hope that's what it is... Or can this be an accurate view of the present and the future of the university system in Sweden? That would certainly be depressing.

Some things make it possible for me to believe so. The funny-mirror system of financing higher education puts huge pressure and incentives on universities to accept all comers and make sure they "pass" their courses (we get money for each student and for each student who passes a course). There is, as far as I can see, little incentive for maintaining a high quality of the education, except for "traditions" in the form a high-demaning (or reasonable-demanding) teachers who continue to demand what is their due.

What I just can't get is why "everyone" has to have a university degree nowadays? I agree with my colleague Ambjörn who says that "we need to create a society for mediocrity". We can't create a society that "works" only for the best, or for the best of the best. And mediocrity is relative. Most of our engineering students are average engineering students and only a few are exceptional. Most people in society are average and, I would argue, most people don't (or shouldn't) need to go to university. It has to be possible to have a nice, satisfying, fulfilling life where you excel at what you work with (some craft for example) without an university education!

Let me conclude by being polemical and facetious. Emperor Caligula famously planned to make his favorite horse Incitatus into a consul. Let's say that some genius wants to "lift Sweden" to new levels of innovation and prosperity [insert more verbiage and airy rhetoric here] - by having the best-educated horses in the world and by forcing universities to start admitting horses to a variety of university educations. This will cause no end to the sorrow of husbandry-deficient "university teachers" who all of a sudden will have even less time for their human pupils (busy as they will be leading horses between lecture halls and shoveling shit all day long). It seems in fact that this would be a idea of outmost stupidity. The university is a specialized instrument and can in fact not do everything for everyone. A university teacher is a specialized instrument too - not suitable for teaching illiterate 20-year-olds to read or to administer therapy to (have long heartfelt talks with) those with large blustering unjustified self-confidence but tender egos (for example those who didn't pass the introductory course).

How different is the horse-scenario though compared to teaching students who "can't read, can't make themselves understood through written language and who have problems understanding simple instructions"? Please don't misunderstand me - my heart goes out to them as they have been terribly abused and betrayed by our educational system. But when did the education of these students become my problem as a university teacher? How would it ever be possible to teach them "without sacrificing academic quality"? Talk about mission impossible! I'm fond of the expression "you can lead a horse to water, but you can't force it to drink". Well, the best I can do as a university teacher is to lead students to knowledge, but I can't force anyone to drink any of it. It requires both ability and hard work to acquire knowledge - even with the help of a teacher. But how can you teach those who are unteachable? That problem is up there together with making the blind see, and making those who suffer blissful.


Post-script (130327). This blog post was linked to from a high-traffic blog (Cornucopia) and will probably be my most-read text before the day is over.

Post-cript (140319). This is a good Swedish-language summary (with further links) to the ongoing debate about the quality of higher education in Sweden.
.
Upplagd av pargman kl. 12:21