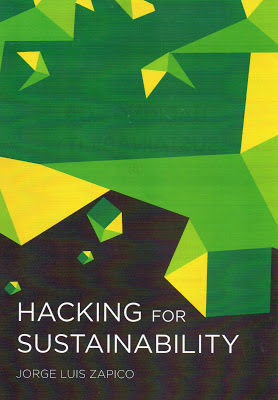 Ph.D. student Jorge Zapico (at my department - Media Technology and Interaction Design) had his final seminar at the end of the week. I was the designated opponent. That means it was my task to read a draft of his ph.d. thesis and critically examine it. Or, my task was rather to think about ways that it could be improved and find things that was unclear and could perhaps be explained better or exapanded.

The task in this blog post is however not to examine the (draft) thesis critically (I already did that last week), but rather just to write a few lines about the thesis and about what makes this thesis interesting and perhaps to some extent unique. I do also have to say that it was a little strange to spend the morning working together with Jorge on a text of ours, and then spend the afternoon trying to point out weaknesses in his ph.d. thesis...

Jorge's thesis is called "Hacking for sustainability" and the thing that mostly stands out is his skill at building pretty comprehensive frameworks that looks and sounds good ("data-driven sustainability"). But most noteworthy is the fact that Jorge's "prime evidence" in is a series of "hacks", or small-ish programs on the web that makes data about sustainability-related issues become more accessible and easier to understand.

A thesis usually has a chapter called "Results", but Jorge instead has a chapter called "The hacks", so these hacks/programs are presented as the "tangible" results of his research. The research (and the hacks) have already been documented in a number of articles, but these texts themselves are not included in the thesis. Five hacks are presented and they can all be accessed on the web:

Green Hackathon is a special case and in mind not very representative as it isn't so much a hack (computer program) as it is an event. I wrote a blog post about the first Green Hackathon that Jorge organized (in Stockholm in October 2011) - stay tuned for more info about Green Hackathons on this blog in the near future...

As to the thesis, Jorge's hope is to be able to present it before the summer. After the seminar, it is up to Jorge and his main supervisor (Marko Turpeinen) to discuss what to do about my comments and my critique. I didn't really see why it wouldn't be possible for him to finish his thesis and present it before the summer (except perhaps for the fact that he's a pretty recent first-time father who now has taken on a new set of responsibilities).

I wish him the best of luck with writing up and finishing up the thesis!