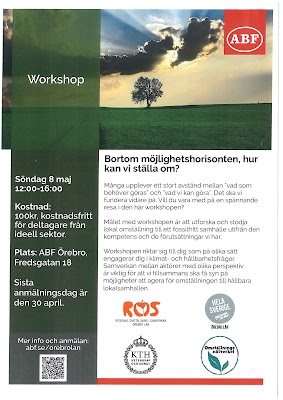 I have been interested in counterfactual scenarios for quite some time but I notice I haven't written a single blog post about our current research project "Beyond the event horizon: tools to explore local energy transformations", despite the fact that it's been going for over two years. And despite the fact that my and Elina's interests in counterfactuals currently are focused on that project. So I 1) searched for all my previous blog posts with the tag "counterfactual", 2) looked up other linked posts that are relevant and 3) list a few events that should have garnered blog posts but for some reason didn't - so here is a blog-centric and quite complete history/summary of my (our) interests in the area during the last six years:
I have unfortunately not blogged about many of the most important events in the list above. But we have by now worked for more than two years with the project "Beyond the event horizon: tools to explore local energy transformations". The persons working in the project besides me are: Elina Eriksson, Minna Laurell Thorslund and Mia Hesselgren (KTH), Mikael Höök (Uppsala University) and Pella Thiel, Martin Hedberg and Amanda Martling (The Transition Network - our civil society project partner). Much has happened since the project started, but it's not until now that we have started to write articles for real and we are currently writing two articles in parallell about the project.
The most important thing we have done in the project however is to develop a workshop format; a three-hour workshop that takes the participants on a co-created journey to an alternative and more sustainable Sweden of 2022 where we only use half the oil, and where we figure out how life has been transformed. We present the scenario and it's up to the workshop participants to figure out how it came to be. Here's a short description of what we do in the workshop:

The fundamental benefit of counterfactual scenarios in this study is to make the future more present in the present. If there are goals and targets we should reach 20 years from now, it is possible to develop ambitious plans and roadmaps and settle for having these goals, targets, plans and roadmaps. It’s as if the difficult part was developing the roadmap - rather than the long, hard, thankless job of making it all happen! If decision makers perceive that they have already done the heavy lifting by formulating ambitious goals or plans, they might easily feel less inclined to follow through. This is on top of already feeling less inclined to act as concrete action can be expected to meet resistance in the present, and the benefits will happen in a far-away future where the decisions makers have left their positions of power (or might indeed not even be alive).

We have solved this thorny problem by stating that the goals and targets in question were in fact formulated 20 years ago (in a counterfactual scenario) and today, 2022, we have in fact reached those goals! We thus start an exercise (workshop) by authoritatively stating that we have indeed reached our targets. This sets the frame for the workshop and it also means we will not and indeed can not fail to reach our goals (it is thus impossible to participate in our workshop and fail to reach the targets that have been set). After presenting the scenario as a (non-negotiable) “fact”, we then spend the remainder of the workshop ferreting out 1) what it actually means to have reached the target (in what ways are society and everyday life different from our world?) and 2) what the “journey” between then (20 years ago) and now (an alternative 2022) looked like.

We held a workshop in Örebro (200 km west of Stockholm) during the weekend (see image above). We were forced to change our plans and develop a digital workshop format during Covid but have now, post-Covid, developed a workshop format that works for physical workshops. The workshop in Örebro was the second physical project workshop and the first physical workshop I myself have attended. The workshop was run by Elina Eriksson and Amanda Martling and I was more of an observer and note-taker. It was great to attend the workshop and much more could be said about it but this will have to do for now. This blog post doesn't describe a lot about the just-held workshop or our workshop format, but it's a much-needed update about our activities around counterfactual scenarios during the last six years.