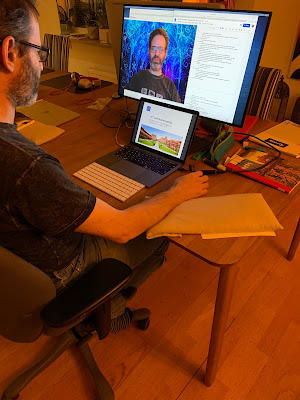 Recreation of my distance lecture set-up (I had a shirt when I gave the real lecture). My new beard is a device for measuring (Corona quarantine) time.


This past week I held my first Zoom lecture. I've given many lectures over the years and I've had many meetings over Zoom and Skype, but this was the first time I combined these two things. KTH transformed itself and went online with all its teaching in less than a week (I wrote about it recently), but I don't teach any courses during this period (2nd half of the spring), so I haven't had to deal much with this personally and on a practical level. I do meet 16 students who work in pairs writing their bachelor's theses every week over Zoom (group 1, group 2), but that't about it.

I was invited almost half a year ago to give a guest lecture about sustainability and computing to all undergraduate students in the Electrical Engineering programme in their "program integrating course". That's 200+ students - definitely a handful. I usually lecture to fewer students, but then again, it doesn't make much of a difference in Zoom as the delivery channel will look the same no matter how many students there are.

A complicating factor though is that my computer hard drive crashed two months ago and while I have pdf files of my lecture slides, I lost quite a few powerpoint slides and had to painstakingly recreate them. For all of these reasons I was a bit nervous and spent a lot of time putting together a slide deck and thinking about how a lecture through Zoom would differ from an ordinary lecture and what I should do about it.

After having held the lecture I have to say that it was ok (but probably not more than that). There were 200+ studentens "present" and the responsible teacher, James, was hosted the Zoom meeting and gave a short introduction. I was a guest lecturer and James controlled the technical aspects of the lecture so that I could concentrate on just talking/delivering the lecture. I encouraged the students to ask questions and asked James to monitor the Zoom chat channel and interrupt me if relevant and interesting questions would turn up. James muted all students so it was in fact only he who had the authority to interrupt me as I gave the lecture. I also didn't want to see the chat channel when I talked as it could be distracting. I think this was a good setup but despite the fact that there were 200+ students, there weren't a lot of questions. At least not until the break (we had a break in the middles just as in real lecture). I suggested students could use the break to pose questions (in the chat channel) and spent the break answering them in writing. I also took another 10 minutes to answer questions that were posed in the chat when we reconvened for the second half of the lecture.

I had two screens when I gave the talk; I had a pdf presentation with slides on my smaller (laptop) screen that I shared with the students through Zoom. On my second, external screen I had the Zoom interface (mostly an image of myself) and lecture notes. I also connected to the lecture through my smartphone. That way I could also be a participant and see exactly what the students saw. I still managed to start talking after the break without remembering to put on screen sharing again (until I was reminded).

All in all it was ok, but I would definitely have preferred to have met the students in a classroom (lecture hall). It was for example much harder to encourage the students to ask questions over Zoom that in a lecture hall. Perhaps that didn't matter much in this case as I had many slides and much to talk about, but still, it would probably have been better had I talked a tad bit less (and a bit slower) and allowed more time for questions. My take-away lessons to me a as lecturer (not limited to to the Zoom experience) are:

- I have realized I have a different and probably better attitude to giving a 10- or a 20-minute talk about a research paper than about giving a 90-minute lecture to students. For some reason I feel that I want to cram as much as possible into the lecture - which is very different from how I think about a shorter talk. If I give a short talk based on a research paper, I have realized (and internalized) that there is no way I can convey everything that is in the paper and everything that is relevant about the the paper - so the function of the talk is to whet the appetite of the audience and convince some (as many as possible) to actually pick up the paper and read it. Perhaps this would be a more productive attitude towards a lecture too, e.g. I can not convey everything there is to convey so how can I say something that makes the students interested in learning more?
- I have a lot more to say about "the problem" that I have to say about "solutions". That's partly because the problem is huge and it's not clear that proposed "solutions" will actually "solve" the problem. But still, if this is a guest lecture I think I should perhaps have as much to say about "solutions" (not "the solution" though) as I have to say about the problem. This is something for me to think about for future lectures.


Addendum (April 13). My union publishes has a website and a magazine, "Universitetsläraren" [The University Teacher]. There's a Swedish-language article from March 26, "Corona forces higher education institutions to digitalize at lightening speed". The Swedish Government held a press conference on March 17 where they recommended that higher education institutions (HEIs) should move all eduction online from the following day(!) and the article describes the efforts of moving everything online as "stressful" but also as a success story. It seems many HEIs have decided to use Zoom and in another article, "Capacity and use of Zoom multiplied in a week", some statistics are presented. From a few thousand simultaneous users and one million minutes per week, Zoom use during the week of The Great Transition increased to 60 000 simultaneous users and 15 million minutes in a week. To manage the onslaught, Zoom immediately bought capacity from Amazon Web Services' recently opened data center in Stockholm. The prognosis is that there will be 100 000 simultaneous users so Sunet (that delivers data services to Swedish HEIs) increased the capacity to 250 000 simultaneous users just to be on the safe side.

What I think is interesting is that Zoom and online education to a substantial extent are described as life-savers. I therefore think it's interesting that also critical perspectives are voiced. I always like to turn things around and I'm intellectually attracted to paradoxes and dilemmas. And so I have recently come to realize that if we didn't have Zoom, I doubt the Swedish Government would have closed all higher education institutions from one day to the other (as well as all high schools in Sweden). Students and teachers do not generally belong to Corona virus "risk groups" (those who do would of course have to stay home) and there are around 400 000 students and 75 000 employees at Swedish HEIs. If these students' exams would be delayed (while still handing out student loans and paying for employees' salaries), the decision to close down everything would have been considerably harder. Close to half a million students and employees are equivalent to almost 10% of the total Swedish workforce...

This also makes me wonder if one reason that societies have closed down (quarantine and all that) is that the comfortable middle class has cushy jobs that can be handled remotely. The working class still have to show up to make society run (water, sanitation, trash, transports, food, public transportation, daycare, schools, care for the elderly etc.), but a large part of the middle class can manage their jobs while being holed up at home. Perhaps that's the most important reason societies can and have shut down and why it's considered an ideal to stay at home? You could imagine that in some other time and place, stay-at-homers would be seen as cowards who scurry to be the first to leave a (possibly) sinking ship to (historically speaking) "head for their countryside villas" while everyone else has to stay in the city and endure the plague.

Finally, here's an even more critical exchange about higher education Corona distance education adaptations between two US professors I know:

Professor 1: One version of the story of the last couple of weeks has been how much upheaval organizations and institutions have gone through in order to switch to a virtual mode. But another is how smoothly they have mobilized ways of working in which they had already trained us. If we believe that education is simply "content", then the mode of its delivery becomes a matter of little concern. When work has already become casualized and virtualized, then the question of where it happens or who does it becomes immaterial. It's interesting to view platforms like Zoom not as tools being pressed into service to meet new circumstances, but as mechanisms that have been standing ready for the dissolution of the workplace all along.

Professor 2: I think it breaks apart the institutions as well. If you don’t have to be at the workplace then you could be working for anyone. It’s a step toward the gig economy for anyone who could work from home. It’s the breaking of the album into singles. It’s the home theater release of new movies. It’s arxiv, instead of journals. The university can just be a collection of outsourced services once there is a fluid market for faculty. Adjuncting on steroids.

Professor 1: The university becomes a logistics organization, coordinating deliveries. [...] the costs of the university are so easily moved onto the individual. In the same way that Uber relies on people to pay for the maintenance of their vehicles, the university is now relying on me to maintain the infrastructure by which I teach -- power, tech, networking, etc. They'll pay for my webcam but they ain't gonna pay for my network service

Perhaps the "success story" of moving online is no success story at all for students and university teachers?
.
Upplagd av pargman kl. 20:49