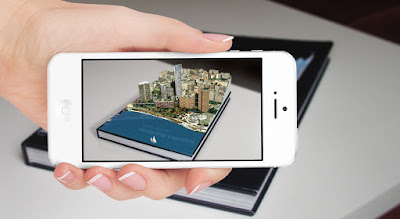 As part of, or rather latching on to the larger Homo Colossus project, three pairs of students are writing their bachelor's thesis on Homo Colossus-related topics and these three theses are geared towards the World Expo. That means that if these three theses are successful, we will continue to work with these projects also after the bachelor's thesis course ends. The aim would then be to develop Augmented Reality installations that can be exhibited at the World Expo at the end of the year.

Below are early descriptions of these three projects/bachelor's theses. They are based on the students' thesis specifications and some additional knowledge that I have of these projects. 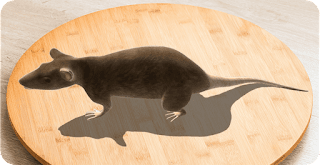 An Augmented Reality rat ate all the cheese! 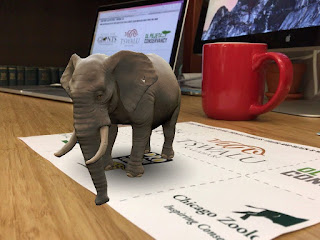 Imagine an animal that represented the energy footprint of the laptop in the background.


"Energy awareness through alternative visual representations" (Kevin Arnmark and Mattias Lundin)
The title is a bit dry, I personally think of this project as an Augmented Reality animal farm in your home (see images above). The basic idea is that all appliances, all devices and all gadgets in our homes (fridge, oven, hair dryer, lamps, computers, TVs etc.) use energy, and, the energy that each devices uses per day could be translated into an animal that needs (to eat) the same amount of energy to get by from one day to the next. A washing machine (with the energy label A+++) use less than 1 kWh per washing. The Swedish Energy Agency assumes that the average washing machine is used 170 times per year so the daily energy consumption of an average Swedish washing machine is thus ≈ 0.5 kWh. This is how much energy an animal (say a dog) that weighs around 12 kilos needs, so your washing machine could be represented by this dog. What other animals inhabit your apartment? Kevin and Mattias will explore this and populate your home with virtual augmented reality animals. 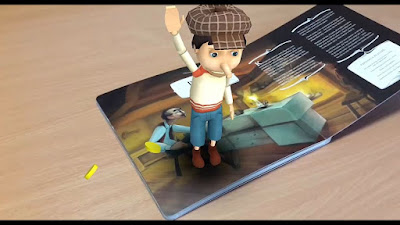 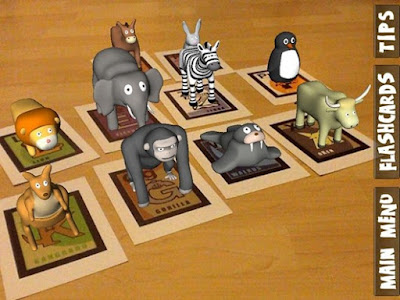 
"Living postcard: Augmented Reality on 2D printed surfaces" (Isak Pettersson and Gabriel Rosenberg)
Isak and Gabriel want to explore Augmented Reality on two-dimensional surfaces. There are examples of AR figures popping up when you turn the pages of a book (for example children's books, image above) and the same technology could obviously be used to endow a postcard (image above) or any other flat printed surface with "hidden information" (a "marker") that comes alive when you look at it through the screen of your AR-enhanced smartphone. The marker could of course also be placed on the ground. One intriguing idea that this thesis might explore are the possibilities that are opened up if you place two postcards near (or beside or partly covering) each other. This idea obviously has 1000 different application areas that could be developed and the effects of the interaction between postcards could for example vary depending on which particular postcards (out of a larger pool) that you place near/beside other or how you orient them in relation to each other! 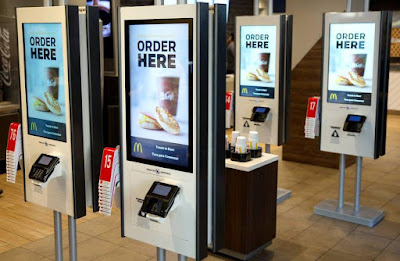 "Homo Colossus Do-It-Yourself" (Linus Tegelmo and Hugo Helander)
Linus and Hugo want to create a system, a walk-up kiosk (image above), that efficiently collects data and calculates your energy footprint. This is basically similar to the numerous carbon calculators that exist (image above), but this system would try to figure out the individual's energy (rather than carbon) footprint. The idea is to collect data about your energy-consuming habits and summarise that into a number that represents your daily energy consumption. This number (say for example 200 kWh/day) could then be translated into the size you would be were you a huge animal that had to extract the same amount of energy from the food you eat each day (see the first proposal above). If you were to eat 200 kWh per day, you would then be 12-13 meters tall and weigh around 30 000 kilos.
.
Upplagd av pargman kl. 13:35