.
My previous blog post was about the sabbatical I'm on between today and August and the three larger projects/commitments that will structure my time during the spring term (January - June/July). This blog post is about my "new year's promises" - a set of rules that will help me establish habits to structure my time and get the most out of my sabbatical. Below I discuss work habits, research habits, writing habits, reading habits, blogging habits, social media habits and communication habits.


1) Work habits
I have a hard time getting the most out of my time when I work from home so I have to leave home and "go to work" every day. When I'm in Stockholm I will for the most part (at least three days per week) sit at The Royal Library. That's where I sat six days per week from when they opened (09.00) and until they closed (19.00) when I wrote my ph.d. thesis - so I have great "muscle memories" of work getting done there (see also this blog post "On work habits and on getting things done"). That leaves one or two days per week for getting work done elsewhere and I'm thinking I just might try to join a stable Hoffice group that meets regularly (once per week). I'm also considering to physically be at KTH one day per week to work in (and also delimit) the research project that will pay for 20% of my time during the spring term. Spending one day per week at KTH might also be convenient for having (perhaps sometimes) "necessary" meetings.

I will spend part of my spring in Barcelona and the general rule when I'm there will of course also be to get out of the house and "go to the office" each day. To meet people and have planned or random conversations is naturally an important part of why I want to go to Barcelona in the first place so it wouldn't do to stay at home and mope. 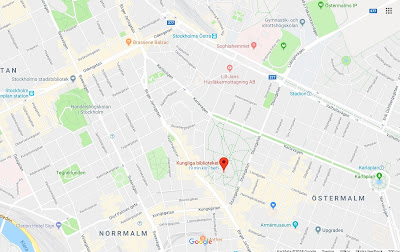 The Royal Library is both near enough and far enough away from KTH (top of the map - a 15 minute walk).

2) Research habits
As I wrote in the last blog post, we applied for and got a grant for a small research project that will run (only) during 2018. I will work in that project 20% during the whole year (i.e. one day per week). That's the full extent of my (paid-for) research activities during the spring term.

If we instead talk about "doing research" in terms of dusting off ideas and writing up papers, well, then I will do a lot more research. One example is that while I worked in a research project (led by Björn Hedin) that just finished (it ran during 2015-2017), there are several more papers we could write that are based on results from that project. There are also a few papers that are half written, 25% written or that have been rejected elsewhere and need an overhaul (and so on). Even better would be to plan and to write papers with people I meet in Barcelona!


3) Writing habits
I have a hard time imagining that I won't write some every day. I have recently realized that if I'm to write a book manuscript during my sabbatical and the book has a dozen chapter, then I need to finalize a (draft of a) new chapter every second week, rain or shine. And that's on top of all other texts I plan to write. It's a bit strange to be stressed out already before I have started, but that's where I kind of feel I am right now.

I plan to write/submit five academic papers and three research grant applications and write two or preferably three draft book chapters between January 1 and February 15 . That's a steep order but I hope the fact that I don't have any meetings, don't teach and can manage my time as I see fit might just do the trick.


4) Reading habits
I wrote about my reading habits back in 2011 and most of what I wrote then still holds:

[...]
These rules probably sound reasonably insane to most people, but they do get the job done and they do get the books read. I am sure these rules and my adherence to them says something fundamental about me, but I can't myself figure out exactly what.

While I for the most part have kept to these rules since back then (April 2011), I haven't been able to fully live up to them during the past year and then some as, during certain periods, there just has been too much work (see also this blog post).

I will however compensate during my sabbatical. If I nowadays ordinarily read 25 pages of non-fiction (academic books) during each weekday and 25 pages during the weekend (Saturday-Sunday) for a total of (a minimum of) 150 pages per week, my new regiment will be 40 pages per weekday (40*5 + 25 = 225 pages). That's a 50% higher pace that usual. I am also considering to, during periods when I'm in Barcelona and away from my family, aim at reading 40 pages per weekday and 50 pages per day during the weekend (40*5 + 50*2 = 300 pages) which is a 100% higher pace than usual. I think it's safe to say that I plan to read a lot of books during the spring. And that's good because I have a lot of books to read. Here are the books I will for the most part choose from during the next 12 months: 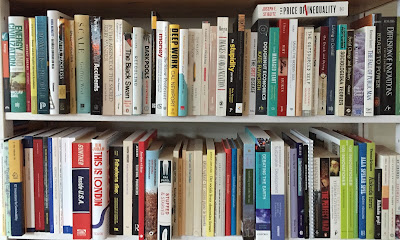 Something that gets sidelined or even shelved when I have a lot of work is to read academic articles. I do read what I "have to" read to be able to write specific articles but oftentimes not really anything more than than. I have, during periods, aimed and managed to read 200 pages of articles per month (50 pages per week - see my 2013, my 2014 and my 2015 new year's promises), but that's a very hard pace to stick to even with a "normal" (not particularly heavy) work load.

But now I'm on a sabbatical and there are a lot of already-printed articles that I want to read. I aim to up the 50 pages per week goal, but don't know how high I can aim. Perhaps 75 pages of academic articles per week, or, could I manage to read 100 pages? My problem here is that I don't have a feeling for how much time it would take to read 75 or 100 pages per week. So I will do an experiment during week 3-5 (Jan 15 - Feb 2). Except for the time I spend on the subway, I will set aside two extra hours each weekday (between 08.00 and 10.00) to exclusively read books and articles and I will see how far that gets me.

I in fact spent the better part of a day during the Christmas break just sorting unread articles into topical piles to prepare for reading'em. Green (below) is computer-related topics (for example "slow (un)design", "sustainable HCI" and "minimal computing"), white is non-computing sustainability topics (for example  "definitions of sustainable development", "steady-state economics" and "degrowth") and yellow is "other" (for example "social practice theory", "NGO reports" and "audit culture"). It would be great to read as many of these piles as possible, but realistically I will probably just make a small dent in this massive heap of unread papers that I'm just dying to read. The 33 piles below are in fact not all the piles as some are doubled-up. I would guess there's actually closer to 50 piles on the table and my guesstimate is that there on average is quite a lot more than 100 pages (say 8-10 articles) in each pile. I obviously should start to plan for another six-month sabbatical where my one and only task will be to read books and articles! 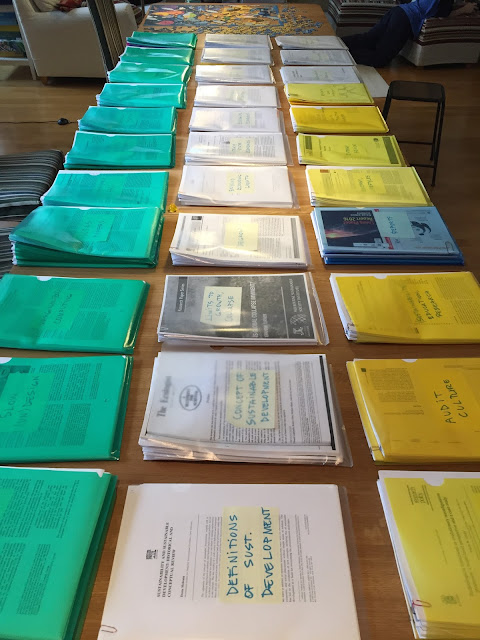 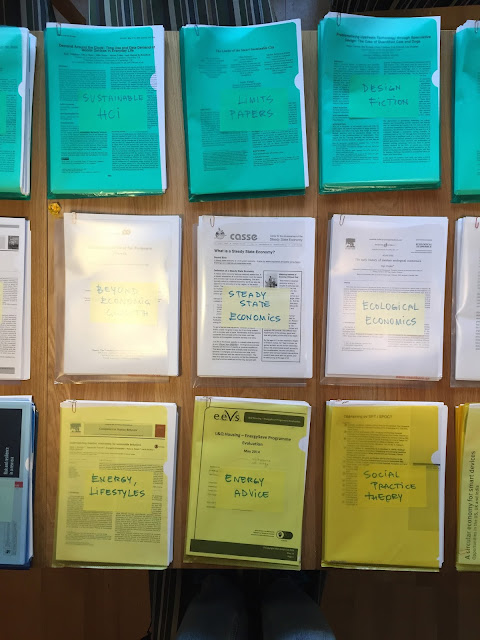 5) Blogging habits
My one main rule for blogging is that I should write a minimum of one and a maximum of two blog post per week. I will immediately break that rule (at least) in January and probably also in February as I will have to write three blog posts per week just to keep pace with everything that happens at the moment.

I recently wrote a blog post about "Books I've read recently" - except I didn't read these book that recently, but more like one an a half years ago! That just won't do! So I plan to write a new blog post about "Books I've read recently" every third week during the spring. I have even set up a "publication plan" of sorts. If things go according to plan, I will have written about all the books I have read during the last 18 months by the end of July. I will of course at that time have read a lot of new books (see above), but I can live with being six months behind and with having reduced the "tardiness gap" from eighteen to six months in just half a year.

Addition (180123): I spend a lot of the time writing blog posts but haven't been so diligent at keeping the static pages updated. I should do that and make sure that (for example) the list of publications is current at least at some point during this year upcoming year. That shouldn't be too hard as I will hand in an application for promotion sometime during the next six months and might as well update the blog at the same time.


6) Social media (Facebook) habits
I know I now and then spend way too much time on Facebook. So I will delete the Facebook app from my phone, be logged out from Facebook by default and only connect for a maximum of two times per day - and not spending more than 15 minutes in Facebook during each of those two sessions.

I'm a member of two (work-related) groups that on a daily basis links to several interesting articles and generate interesting discussions that take a lot of time to read - so I will quit these groups (or rather "unfollow" and turn notifications off) during the coming six months. I in fact just did that and that should help me keep down the time I spend in/with Facebook.


7) Communication (mail) habits
I think I will try to habitually delay answering all non-essential mail by one day. That means that mail I get today will either be left unread or at least unanswered until tomorrow. I'm open for advice or suggestion for how to decrease mail if you happen to have any!

I will naturally make exceptions for co-authors of papers I'm working on, colleagues in the research project we are starting up etc. It might in fact be a good idea to get hold of me by sending a private message in Facebook (which I will then read twice per day).


That's about it, the full list of my new year's promises, my work habits and suggestions for how to get hold of me during my sabbatical (January - June/July 2018).
.
Upplagd av pargman kl. 09:53