I'm on sabbatical until August! 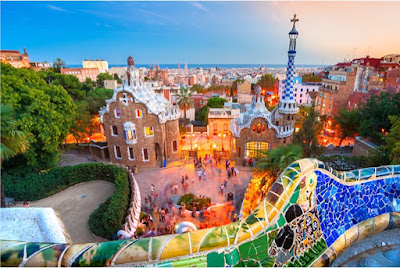 Some know, many don't, but I'm on a sabbatical as of January 1 until August!

I've for the most part kept a low profile and have only explicitly written about it twice on the blog in the previous year, first in November last year when I visited Barcelona and my soon-to-be hosts there and then in February when I handed in an application for the very generous funds for going on sabbaticals that KTH offers to (only) a handful of its faculty members. I didn't get that money but have over last five (or so) years accumulated overtime that allows me to take half a year off with salary.

It might be that I will work harder than ever during the coming six months (see my next blog post), but it will still feel like a breeze since I have the power to manage my time as I see fit every single day. I don't have to teach, I don't have to attend meetings, I don't have to show up at KTH for any reason whatsoever and I can be a bit more relaxed about answering my mail (work-related issues can hopefully be forwarded to colleagues). I will also for the most part stay far away from KTH and perhaps in some other ways try to make myself a bit more "unavailable". My three main commitments that will structure the spring term are:


1) I will share my time between Stockholm and Barcelona.
When we visited Barcelona a year ago our intention was to go there with the whole family for half a year. That won't happen for various reasons. I will still go to Barcelona but only during parts of the spring term. I will more specifically go there for three weeks in February - March and then for a longer period in May - July. As to what I will do in Barcelona, I for simplicity lift some text from the application for funds (see above) I wrote back in February:


I now apply for funds to go on a sabbatical in Barcelona during the first half of 2018. I will primarily visit the Institute of Environmental Science and Technology (ICTA) at the Autonomous University of Barcelona. ICTA has 60 researchers and professors and another 75 Ph.D. students and I have been invited there by (and will primarily work together with) professor Giorgios Kallis and his research group. I am also acquainted with professor Leandro Navarro at the Universitat Politècnica de Catalunya and I plan to visit also his group, the Distributed Systems Research group at the Department of Computer Architecture.
I am very excited about visiting ICTA, whose transdisciplinary research ranges from the natural sciences to engineering and social sciences. After having become part of the computing-and-sustainability community, I would now like to broaden and strengthen my knowledge in non-computing sustainability areas and bring that knowledge with me back into computing. ICTA is equally interested in having me visit them as they work in the area of environmental sciences and technology but have never before had a ”computer person” visit them. ICTA has recently been awarded the highest institutional recognition of scientific excellence in Spain and the accreditation came with a 2 million Euro grant. ICTA will use the grant to implement a 2016-2019 Strategic Research Programme, addressing major global environmental and sustainability challenges related to anthropogenic climate change. My host, professor Kallis, leads one of ICTA’s five multi-disciplinary projects within that Strategic Research Programme.


Planned activites are still under development but I have discussed the possibility of me giving a ph.d. course with professor Kallis. I also have extensive plans for writing research papers and articles during my sabbatical and I certainly aim to explore possibilities of co-authoring papers together with ICTA researchers as well as laying the foundation for joint research projects and EU research grant applications. I have however decided that it is even more important to take the opportunity to find a project that is uniquely suited to being on a sabbatical, and that project is to write a book. I have now started preparations by talking with friends, colleagues and acquaintances who have written academic books. My goal is to secure a contract with a publisher before the major book-writing effort commences.
My previous sabbatical at UC Irvine was primarily financed by working in a research project at a distance. While that certainly was a privilege, I would very much look forward to the opportunities and the added freedom that earmarked KTH funds would bring.


2) I will write a book.
My main commitment during the spring term will be to produce a book manuscript. I started to plan the book during the autumn term but have had to set it aside during November and December due to a high work load and general busyness. I do however have an outline for the book (it has a dozen chapters) and it recently struck me that I generally have to produce a new chapter every two weeks during the spring in order to finish the book manuscript before the summer. That's a hectic pace because while the book is my main commitment it's not my only commitment during the spring. I will write a separate blog post about the book project when I have the opportunity to start up working on it for real.


3) I will work 20% in a research project.
We handed in a research grant application in August and we got the funds we applied for! "We" are (besides me) my colleagues Björn Hedin (project leader), Elina Eriksson and Cecilia Katzeff. Our application is called "A systematic review of the scientific literature on digital interventions for more sustainable food consumption behaviours". The funds we applied for will cover 20% of a person-year for each one of us (Björn also has some extra funds for administering the project). We had talked about working more intensively together for a limited period of time, i.e. to instead work 40% for half a year, and that's fine for everyone but for me. Since I have already secured funds for the spring, I can't imagine spending almost half my time during my sabbatical on this project and still manage to produce a book manuscript. I will therefore work for 20% in this project during the spring term and will then be the only project member who will also work with the project (20%) during the autumn term. I will then take the main responsibility for writing the report and the paper(s) we have promised to produce within the project and this is a role that fits me perfectly! We will have a few start-up meetings in January and I will write a separate blog post about the project perhaps a month or so from now.

As for how to get in touch with me during the spring, I would say that email is best. It might be that I will consider delaying answering non-essential emails by a day just to slow down the tempo of my correspondence (the more mail you send, the more you get back). I also have some other ideas about how to structure my communication habits and more generally how to structure my time - this will be the topic of my next blog post.

When I'm in Stockholm, I plan to to for the most part sit in the Royal Library. Another option to get in touch with me is thus to set up a meeting there (for example lunch or at a coffee break). The Royal Library is just a 15-minute walk from KTH if any of my colleagues need to see me. You are welcome to drop by - but send me a mail first as I won't be there every day. 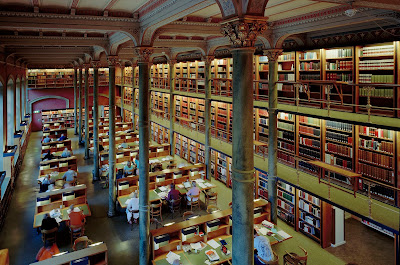 The Royal Library - the closest thing to a workplace for me during the spring term.
.
Upplagd av pargman kl. 21:13