.
I went to the annual KTH Sustainability Research Day yesterday (just as I attended and blogged about last year's event). The event (13-17) was fully booked (300 persons) so I think it has to be considered a huge success already before the vice chancellor with responsibility for sustainability, Göran Finnveden, opened up the event by welcoming the attendants.

The (half) day was divided into two parts where the first part consisted of traditional plenary talks. I especially liked the very first speaker, Mikael Karlsson, who talked about the relationship between science/scientist and politics/politicians, media/journalists or more generally about the relationship between research and surrounding society based on a recent report that Eva Alfredsson and he had written (news article, morning newspaper debate article, the report (pdf)). Here's how the summary of the report starts:

"This report is originally written as a decision support document for the Swedish All Party Committee on Environmental Objectives (Miljömålsberedningen) whose tasks include proposing a climate policy framework for Sweden. The aim of the report is to analyse political decision-making on climate policy and how it is affected by economic modelling and decision-making requirements. The report provides an overview of costs and benefits of climate policy measures and discusses decision-making approaches and the burden of proof under climate scientific uncertainty."

Mikael said several things that were very interesting:
- The one question that is always posed is "what does it cost to change things?". The question that is never posed is "what does it cost not to change things?"
- There are unreasonable demands on proof before a specific measure can be taken.
- There are unreasonable demands for decisions. The specific example was that a company can use whatever criteria they feel like to buy something but a municipality (or a university) is heavily circumscribed in their decisions about what products or services they want to buy. This makes change difficult (or indeed the very process of buying products and services in the first place).
- Mikael asked who in the audience is in the habit of eating unknown mushrooms. Not a single person raised his/her hard. Despite this industry is allowed to introduced new "exiting" chemicals into our environment until it has been proved (perhaps decades later?) that a specific chemical is dangerous and/or has detrimental effects.
- There is inertia, change has to have (proven) beneficial effects before it happens. But why couldn't it be the other way around, perhaps the proof should be on those who act within/want to keep a system that clearly is unsustainable?

The next speaker, Mark Howells, showed a really interesting image of how UN's 17 Sustainable Development Goals (SDGs) are interlinked: 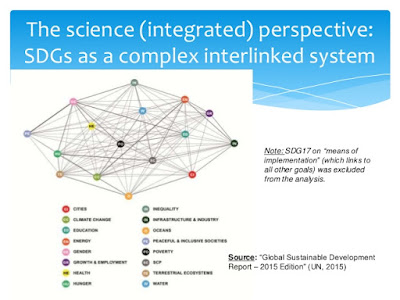 So if you want X, you also have to work on goals Y and Z. He specifically talked about and gave several examples of how goals having to do with energy, water, food and poverty were linked. One example I thought was interesting was how people downstream might/could/should "pay" people upstream not to chop down trees. What the downstreamers lose on transfers of payments is saved by not having to deal with flooding. But this relies on complex systems that can mediate and coordinate between upstream and downstream communities and interests and I immediately thought of how this perspective might be problematic or even conflict with Nobel prize winner Elinor Ostrom's theories about local (communities') self-reliance and self-determination.

Another speaker was our Minister for Financial Markets, Per Bolund. I had no idea that he apparently is doing a (temporarily or permanently "resting") ph.d. in systems ecology (?). He has been a member of the parliament since 2006 so the chance of him actually finishing his ph.d. might at this point be slim but I was still pretty impressed by this. He later participated in a panel with three other persons of which one was my colleague Josefine Wangel who did good.

The day was later ended by a short talk/summary by our incoming chancellor, Sigbritt Karlsson.


I mentioned that the (half) day was divided into two parts and the second part was a ConverStation exercise with no less that 31 parallell presentations of ongoing sustainability-related research. I have written about the ConverStation format in other blog posts; in 2014 quite critically and in 2016 with more sympathy. I do have to say that for this event and for this setting it was a very good match and the ConverStation format really shone. 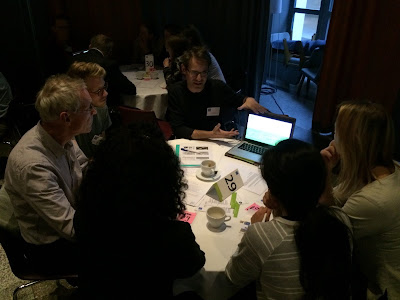 Here are the ConverStation instructions (in Swedish) that the 300 attendees had access to (the document includes a list of the 31 presentations they attendees could choose from). No less than nine of the presentations were held by (people I consider to be) colleagues of mine from the KTH Center for Sustainable Communications (CESC).

Each presenter presented his/her research/project three times for groups of up to six attendees who sat around a round table. The idea was for the presenter to talk for 10 minutes and then leave 10 minutes for questions and discussions. The attendees in their turn choose which talks to listen to by grabbing a limited number of "tickets" (post-it notes) with a number of the presentation and color for the time slot (pink, green and blue = first, second and third time slot). From my point of view it all worked really smoothly.

I presented the study and the paper that I had indeed presented using the ConverStation format only one and a half months earlier at the 4th ICT for Sustainability conference. Since I had also presented it in a plenary session (as one of the six best paper nominees), I had in fact already had a finished Pecha Kucha presentation with 16 slides that I straight off reused for this Pecha Kucha presentation. It all worked out for the best and I took some notes from my discussions with the three groups of attendees who listened to my presentation(s).
.
Upplagd av pargman kl. 23:50