.
"Books I've read recently" is a recurring topic and here is the previous blog post (same topic, different books). Below are books that I read back in April and May this year. I also read a bunch of books during the summer and I wrote about them at the end of the summer (here and here).

The four books below are all broad and critical analyses of the direction we as a civilization and as a species have taken and why that direction is pure folly. All three books treat the unsustainability of our current path and all three authors preach that we should amend our ways ASAP. 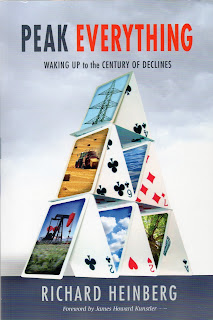 Richard Heinberg is a prolific writer and opinion builder. I've read two of his earlier books ("The party's over" and "Powerdown"), but that was five years ago. A year ago, I did however read and write about a book that Heinberg co-edited, "The post-carbon reader". Heinberg's "Peak everything: Waking up to the century of declines" came out in hardcover in 2007, right before the financial crisis hit. I thought it would be a good idea to follow it up by also reading his 2011 post-crisis book (see further below in this blog post).

First a short note about the book cover. I wrote a paper (unpublished) and gave a talk at a workshop (conference) three years ago, and I used the image of the book cover (above) as part of my slides. The talk was well received but it didn't sit well with on particular person in the audience and he especially didn't like the book cover picture above. The picture implies that modern societies are fragile, like a house of cards, and he instead insisted that they are robust (he himself had done research on our electricity infrastructure). Still, I like the picture and I still use it in my slides. It's a great illustration of how dependent we are on fossil fuels.

When I started to read the book, I discovered that it wasn't a monograph, but rather a collections of 11 shorter (previously published) texts. The quality of the texts are high (Heinberg's writing is almost always polished, lucid and well structured), but I recognized quite a few of the ideas and the line of reasoning from other texts of his that I have read. Still, a few texts (chapters) were very good, including a text about the hyper-sensitive topic "Population, resources and human idealism". That chapter can be summarized as follows: "idealism and good intentions are insufficient responses to problems of population pressure and resource depletion". That text is also available online. 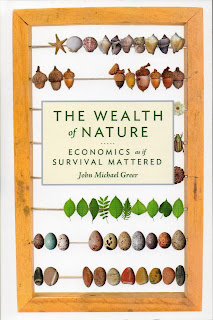 Greer does nothing less than tearing down the very foundation of traditional economics by head-on challenging some deeply-held assumptions among economists (and thus also by politicians and decision-makers):

"the rise of economics as a science and a profession has not been accompanied by any noticeable improvement in the ability of societies to manage their economic affairs. It's ironic, in fact, how few benefits industrial societies seem to have gained from their economic experts in the last few decades."

Many things that made sense 200 year ago, in a world of (perceived) abundance of energy and resources, do in fact not make sense any longer as we realize the finiteness of energy resources, minerals, land (population, food, forests), water (fish/irrigation) and indeed even air (climate change). What makes Greer special is not only what he says, but the way he says it. He has a very sharp pen and an ability to find exceedingly powerful stories, analogies and formulations. To Greer (referring to Schumacher), energy is the "ur-commodity, the foundation for all economic activity":

"In an age that will increasingly be constrained by energy limits [...] a more useful measure of productivity [instead of labor productivity] might be energy productivity - that is, output per barrel of oil equivalent (BOE) of energy consumed. An economy that produces more value with less energy input is an economy better suited to a future of energy constraints"

"In the twilight of the age of cheap energy, the most abundant energy source remaining throught the world will be human labor [...] human labor has certain crucial advantages in a world of energy scarcity, just as it did in earlier eras of economic contraction and social decline. Unlike other technologies, human labor if fueled by food, which is a form of solar energy. [...] field labor by human beings with simple tools, paid at close to Third World wages, already plays a crucial role in the production of many coops in the US, and this will only increase as wages drop and fuel prices rise. The agriculture of the future [will] rely on human labor with hand tools rather than more energy intensive methods. [...] Such an agricultural system will not support seven billion people, but then neither will anything else. [...] perhaps the best way to describe the changes ahead is to say that most of the world's industrial nations are in the process of becoming Third World countries." 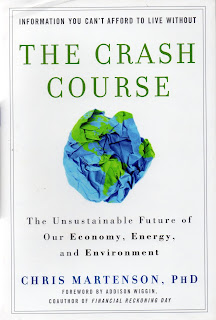 I knew of Christ Martenson mainly through his "Crash Course" series of explanatory online video lectures about the connections between economy, energy and environment. They are highly praised by many, but for some reason I have never watched these videos as a series but rather just a handful of them. I instead opted for reading his book, "The crash course: The unsustainable future of our economy, energy and environment" (2011).

Christ Martenson was a career-oriented executive who then "saw the light" and turned his life around. Parts of the book feels very American, sort of like a self-help book with a lot of self-promotion thrown in ("I turned my life around and did all of this, and if you put your mind to it, so can you!"). It basically covers the same topics as all the other books in this blog post and compared to the competition, this is the book I liked the least. 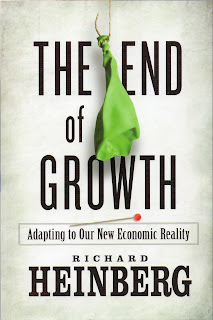 If the Richard Heinberg book above is his pre-crisis book, "The end of growth: Adapting to our new economic reality" (2011) is his post-crisis analysis. As early as in the very first sentence on page number 1, he states that "The central assertion of this book is both simple and startling: Economic growth as we have known it is over and done with." The kind of economic growth that we won't have any more is growth of the overall size of the economy and of materials and energy throughput. "From now on [...] the global economy is playing a zero-sum game, with an ever-shrinking pot to be divided among the winners." That means we are right now, globally, transitioning from economic growth to economic contraction. That might not be a total catastrophe if we could just understand and replace "more" with "better".

Heinberg is a truly gifted teacher and he backs up his arguments with sound data, diagrams and lots of sources, but he doesn't measure up to Greer's ability to create and spin stories. Still, you can do worse than reading a book by master pedagogue Richard Heinberg:

"Energy, water, and food are all essential and have no substitutes, which means that prices fluctuate wildly in response to small changes in quantity [...] As a side effect of this, their contribution to GNP [...] increases as their supply declines, which is highly perverse. When financial publications tout "bullish" oil or grain prices, the reader may naturally assume that this constitutes good news. But it's only good for investors in these commodities; for everyone else, higher food and energy prices mean economic pain."

"Limits to freshwater could restrict economic growth by impacting society in four primary ways: (1) by increasing mortality and general misery as increasing numbers of people find difficulty filling basic and essential human needs related to drinking, bathing, and cooking; (2) by reducing agricultural output from currently irrigated farmland; (3) by compromising mining and manufacturing processes that require water as an input; and (4) by reducing energy production that requires water. As water becomes scarce, attempts to avert any one of these four impacts will likely make matters worse with regard to at least one of the other three. There is now widespread concern among experts and responsible agencies that freshwater supplies around the world are being critically overused and degraded, so that water scarcity will increase dramatically as the century wears on."
.
Upplagd av pargman kl. 22:58