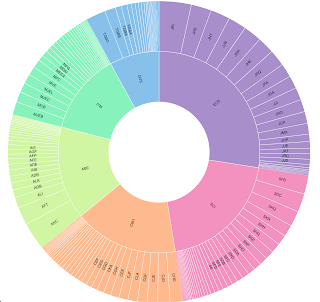 Four months ago I wrote a blog post about our research group's many proposals to the project course "Advanced Project course in Interactive Media Technology". One of the proposals was called "Flightminder - Gapminder for KTH’s flight data". One student project group chose to work with it and the name of their tool has since been changed to FlightViz. Our great students interviewed me and the other researchers in our FLIGHT research project and developed a tool that took as raw data all trips made by airplane during a 12-month period and then made nice graphics out of this data. The five students (Alexander Heikinaho, Jonathan Ramirez Mendoza, Alexander Nordh, Filip Stål and Joel Weidenmark) did a great job and they presented their work to us earlier this week. The only person who had lots of opinions about (many) possible improvements of the tool was my colleague Mario Romero - who is not part of the research project but who helped supervise the students together with me and who was the one person that works with visualisation on a day-to-day basis.

The image above is one of the three main views in the tool and it show who (which school and which department) flies and it is based on test data for the period September 2018 to August 2019. This data will be replace by new day that covers the whole period (36 months) between 2017-2019 that we have just received. The image below instead shows where we are flying. The (code for the) FlightViz tool will be handed over to the FLIGHT research project and it's our new PhD student Aksel Biørn-Hansen who will care for it (I wrote some about him in the previous blog post). As he moves to Stockholm a month from now, we have postponed the actual handover until he has relocated from Gothenburg.

The next step is to evaluate how well the current version of the tool works also for others at KTH who would like to know more about our flying (our travel manager, the KTH Sustainability Office, heads of schools etc.). Fortunately there is great interest among our students to take on this particular topic for their bachelor's theses during the spring term (January-June). That course is only just now starting but I will write a blog post when I know more (within a few weeks). Prospective user evaluations of FlightViz (spring 2020) will then generate input for the next version of FlightViz (autumn 2020). 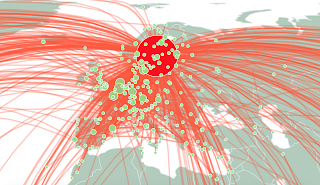 FlightViz showing 12 months' worth of airplane trips at KTH. Where do we fly?


While there are other projects that look at academic flying, I have yet to see another project that develops tools that put effort into visualising universities' flying patterns. To develop such tools is however not the main purpose of our project, it's just a means to help us understand our KTH's flying. Based on such understanding we can then propose ways to decrease flying that is in line with KTH's climate goals (decrease CO2 emissions from flying with 20% over a five-year period). 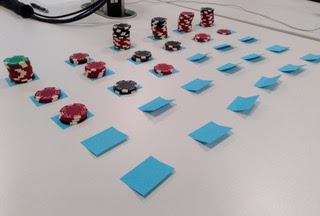 This is all the flying at one department during the last 12 months.
Blue post-it note represents one person at the department.
Each poker chips represents one plane trip.
Green = within Scandinavia, red = within Europe, black = intercontinental trip.


To that end, we also conducted a test workshop that very same day. We met up with a department that flies very little and showed them all plane trips at another department during the proceeding 12-months, this time using poker chips (see above). We also compared and discussed their flying (same number of trips but considerably fewer flights). Many interesting things came out of this workshop but one thing that was interesting was that the "low-fly" department's trips were very evenly distributed while the "high-fliers" were very unevenly distributed. Out of the 95 trips the high-fliers did during a 12-month period, half the personnel contributed nothing to that number as they had not flown even once. Out of the people who flew, most had flown only once, twice or three times in a year. A small minority had instead flown more than once per month on average and the trips of a handful of persons (<15% of the personnel) constituted a very high proportion of the departments' total trips. I have a hunch and that is that this patterna will be reproduced in many different departments.

This was a test workshop. We are currently recruiting departments for the "real" workshops and are aiming for five departments (on at each of the five KTH schools). I will of course get back to and blog about this topic again (and again) because FLIGHT is a three-year project and these are early days in the project. The research grant application was submitted almost exactly a year ago and the project started about half a year ago.
.
Upplagd av pargman kl. 19:47