Our new master's program in Interactive Media Technologies started a year ago and the first batch of students are now studying their second/last year in the program. The second quarter just started and the student are now studying their very last courses before they will write their master's theses during the spring term. One of these courses is a new course called DM2799 Advanced Project Course. All teachers at our department were asked to submit research-related project proposals and we all together came up with no less than 35 proposals and no less than seven of these 2-page proposals were submitted by mine and Elina's sustainability team (MID4S). These were the seven MID4S project proposals:

The 80 or so students who are taking the course made their 1st, their 2nd and their 3rd hand choices known and were then matched with project proposals and divided into groups of 3-5 students. There were in the end groups formed around 15 of the 35 proposals, but four proposals were so popular there are now two groups of students working with each of these proposal. Yet another groups of students had already been recruited by me and Cecilia Katzeff long before the course started and these were the projects that students ended up working with (italics & bold = MID4S groups):

That means no less than 7 out of 19 groups that were formed work with topics that were formulated by the sustainability team and I am myself involved in supervising three of these groups. The course started two weeks ago and the students were divided into groups the first week (no time to lose!). I met my groups this past (second) week for the first time and they are now all up and running. The one exception is mine and Cecilia's already-recruited group that works in our research project and that now continues to work with that research project also within the project course.

The time schedule for the course is very compressed; the students will present their projects and the results in the form of 4-5 pages long research paper (ACM format) as well as an oral presentation on December 19. That's not a lot of time but there are on the other hand 3-5 students in each group and they are supposed to work 20 hours/person every week = "my" 12 students are supposed to work 240 hours per week altogether in these three projects and that's quite a hefty amount of time.

This course is given for the first time so we are to some extent all flying blind here, but it's all very exciting and I think the course could become really great after two or three years when the faculty has understood how to make the best use of the course and of our students' capabilities. I personally very much like the fact that this course allows students to work hands-on with research-related questions and processes in close collaboration with researchers at the department. It really is a very good way to prepare the students for their upcoming master's theses projects

Here's the very core of our project "Eating insects would be good":

"Your task in this project is to design a system (mock-up/prototype) that suggests suitable matches between different types of food/recipies and different types of insects. The system could be based on real data, but it would also be ok to fake suitable matches between insects and recipies, since the more important part of the project is to test/evaluate the prototype and evaluate people’s reactions to the idea of using insects in their cooking. Would people consider insects in recipies or is the yuck factor just too strong? It would be suitable to test the system on a target group that cares a lot about the environmental consequences of what they eat"

And here's the very core of the project "Visualizing our colossal energy footprint":

"This project is very practical. Your task is to utilize advanced computer graphics to visualize the size/footprint of modern humans if our only source of energy was the food we ate (as is the case for all other mammals) and we used/had to ingest (eat) as much energy as we use in our daily lives." 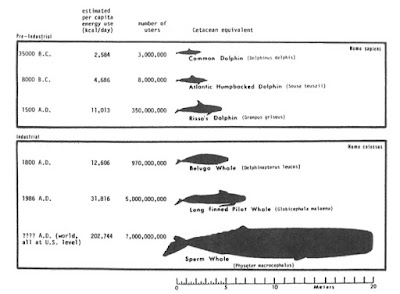 Figure 1. The size a human would have been at different times throughout the ages if all the energy she used would instead have been ingested. The sperm whale represents an American anno 1987. Our size (i.e. our energy consumption) has grown much bigger since then (Project proposal Visualizing our colossal energy footprint).
.
Upplagd av pargman kl. 20:15