What if there had only been half the oil? (article) 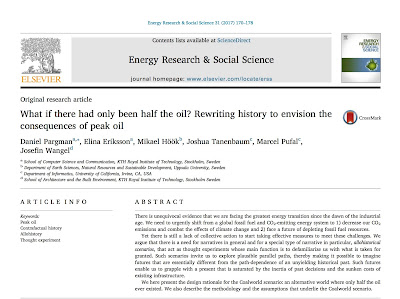 My first-ever article that is not about computing has just been published (it's about peak oil and sustainability). The publisher (Elsevier) informs me that the article is publicly available for free for for everyone for 50 days (until November 7) if you follow this link. The article will unfortunately not be available under open access after that since there is no research project that backs it up (and that could pay the fees for setting the article free). I should at some point also closely read Elsevier's sharing policy.

The article, "What if there had only been half the oil? Rewriting history to envision the consequences of peak oil" is an exercise in contrafactual history ("what if...?") and it is written by Daniel Pargman, Elina Eriksson, Mikael Höök, Joshua Tanenbaum, Marcel Pufal and Josefin Wangel. Since this is a strange bird - it's not every day you get an article about contrafactual history published in a reputable academic journal - we were indeed very lucky to have it published in the exact right venue; in a special issue of the journal Energy Research & Social Science about "Narratives and storytelling in energy and climate change research" (edited by Mithra Moezzi, Kathryn Janda and Sea Rotmann).

A pre-print version of our article has been available online for the better part of two months (so I could feasibly have published this blog post at the end of July), but it was behind a paywall and only half available. Also, now it's official and it's now also possible to refer to the article correctly (with information about volume, issue, pages etc.).

This is the first in a planned series of articles about "Coalworld" - a world where there ever only was half the oil that has existed in our world, "Oilworld". Spolier: that means peak oil happened in the 1970's and that we by now would have lived for more than 40 years with the consequences of constantly decreasing oil production. I have written about this project on the blog a couple of times before and expect to do so again (and again) in the future:
- Coalworld: Envisioning a world with half the oil (Nov 2016)
- On the effects of the early 1970’s global peak in oil production (July 2016)
- Consider Half - greatest project idea ever? (June 2016)


Here's the abstract of the article:


What if there had only been half the oil? Rewriting history to envision the consequences of peak oil

There is unequivocal evidence that we are facing the greatest energy transition since the dawn of the industrial age. We need to urgently shift from a global fossil fuel and CO2-emitting energy system to 1) decrease our CO2 emissions and combat the effects of climate change and 2) face a future of depleting fossil fuel resources.

Yet there is still a lack of collective action to start taking effective measures to meet these challenges. We argue that there is a need for narratives in general and for a special type of narrative in particular, allohistorical scenarios, that act as thought experiments whose main function is to defamiliarize us with what is taken for granted. Such scenarios invite us to explore plausible parallel paths, thereby making it possible to imagine futures that are essentially different from the path-dependence of an unyielding historical past. Such futures enable us to grapple with a present that is saturated by the inertia of past decisions and the sunken costs of existing infrastructure.