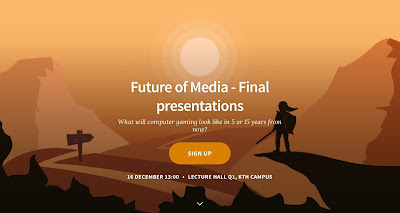 This is a two-for-one blog post (re-using an earlier invitation as a template). First an open invitation to next week's (Dec 16) final presentation of "The Future of Computer Games / Computer Games of the Future", followed by the introduction to the limited-edition book we are publishing on that topic.

The course is given for the 14th year and I think this year's presentations might be the best and the most ambitious ever. It is also the last ever as we are currently ushering in a new master's program where this course will be replaced by another project course. Do note that the 11 project groups span a very wide area and will present concepts, ideas and scenarios that, for example, treat the future of pervasive games, e-sports spectatorship, movement-based games, mixed-reality boardgames, gamification of everyday life - and more!

Here are nine trends for the next 5-15 years that we have identified and that has had an impact on the scenarios of different project groups [further developed in the book introduction below]:

The course load corresponds to a third of a semester and runs throughout the autumn semester. This year, 2016, the course is given for the 14th time, and for the sixth time in English, with participating international students. A special effort has been made to document the work, and to make the results of the course available on the Internet. The results include this book, “The future of computer games”, a webpage, as well as concrete practical “design representations” such as for example movies and prototypes that have been created by different project groups within the course. The results of not just this year’s course, but of previous as well as successive courses are available on the internet at http://futureofmedia.se/archive.

Not that many years ago we had violent debates that flared up at regular intervals about the connection between computer games and violent behavior. Nowadays almost everybody plays computer games; from old grandmothers who play Wordfeud or Candy Crush Saga on their smartphones on the subway to hard-core gamers (PC or consoles) that spend a major part of their leisure time – and their disposable income – on gaming-related activities. The latest gaming craze to seize the world was this past summer’s hunt for Pokestops (“Gotta catch ‘em all”).

The place for games in our lives, in our economy and in our culture has been expanding for decades. From having been a small appendix of the toy industry, the games industry has had double-digit growth numbers for decades and the time spent in – and the fidelity of – the virtual game worlds we play with is so high that some researchers have playfully talked about people leaving their boring Earth lives behind in order to “emigrate” to Azeroth (e.g. Castronova 2007, “Exodus to the virtual world”). Perhaps it’s justified to say that a hardcore gamer to some extent “lives” on the planet Azeroth (in the massively multiplayer online game World of Warcraft) if a major part of her time is spent there rather than on Earth?

To sum it up, games are everywhere; on the Internet, in our phones, in the subway, in schools and libraries and in our living rooms. But where will games be tomorrow? What could “the future of computer games” and the “computer games of the future” look like? These are the questions that our students have explored in the course Future of Media!

In the course Future of Media, we have this year thought long and hard about technological, economic and social aspects that are connected to games and gaming – what it was (past), what it is today (present), and what it will become tomorrow (future). What effects do the internet, new forms of hardware and software and new gaming habits have on games and gaming? What are the effects on traditional media channels and traditional business models of games being developed and marketed in new ways? How will stories be told through games in the future? And how will games and everyday life be intertwined in the future? These are issues that have been discussed, leading up to our main question: what will games and gaming look like 5, 10 or 15 years from now?

No less than eleven groups of students have explored eleven different gaming futures during the autumn of 2016. The students presented their suggestions and the results of their projects in front of a live audience on December 16, 2016, but the results are also available here, in this book, as well as online, http://futureofmedia.se/gaming/

A framework for all project groups has been to aim for a future that will happen sometime in the next 5-15 year, i.e. sometime between 2021-2031. All projects have also limited themselves to, or at least orient themselves towards, a Swedish (Western, relatively affluent) context. The proposed futures might, but do not have to assume large technological breakthroughs. Some technologies and ideas are already around today, or are being explored in research labs at this very moment, but might take many years or even a decade or more to germinate – to spread and take hold among a larger proportion of the population. The challenge might not always be to invent a purely technological future, but to imagine patterns of usage and new business models that emerge when current (or future) patterns of usage among small groups of early adopters spread to larger groups in our society. Despite the wide scope of different ideas being presented in these projects, there are a number of trends that the thirteen project groups have position themselves to.

Below are nine trends that relate to the future of computer games and the computer games of the future. Each trend is important for at least one or a few groups and sometimes for several or many project groups.

4. Augmented and mixed reality
The market for, and applications of augmented reality (AR) will explode - and this summer’s Pokémon Go craze was just a mild precursor. You will see reality as it is, but with overlaid digital information and images that only you (or perhaps fellow gamers) can see. Another “layer” is added to reality by watching it “through” your phone or by having your glasses project images “on top of” the real world. This mix of analog reality and digital illusions opens up possibilities to play games while taking a stroll or inside your own home.

5. Virtual reality
While AR a digital “layer” to reality, virtual reality (VR) replaces the analog information that reaches our senses with digitally manufactured information (primarily sight and sounds). Virtual reality headsets are slated to be The Christmas present for 2016 and the hardware (and software) will become increasingly affordable and widespread.

6. Holographic projections
Just as with virtual reality gear, also holograms - that project images that many persons can see  in mid-air - will become less expensive and more widespread, including being utilised for gaming purposes.


7. Sensors galore
Sensor technology will progress in leaps and bounds. Sensors will be more numerous, they will collect more types of data more precisely and at a lower cost. Sensor output will be collected and analysed at greater scale and at at a lower price (see “big data” below) and the output of such analysis will be integrated (will become input to) AR and VR technologies (see above)

8. Big data
More data will be collected at a faster pace, for example from sensors (see above) as well as in the form of game output. Such (game) data could be used for game development purposes, but will primarily be used for analysing each individual’s interaction with each game (and perhaps game element) for the purpose of better tailoring and personalize games and player’s experiences of playing those game.

9. AI and machine learning
Artificial intelligence (AI) techniques (for example machine learning) will be utilized in ways and at a scale far beyond what is possible today. AI will work with big data generated by games (see above) and the primarily use will be to personalize games and player’s experiences of playing those game.

Future of media - work process
During an intense six-week long start-up phase (beginning of September – mid-October), the whole class read selected literature about computer games, worked with related issues in seminars, and listened to more than 20 guest lecturers from industry and academia. These guests had a variety of backgrounds, presented us with a wide variety of perspectives and gave us a well-rounded picture of the history of computer games, the present situation, as well as suggestions for trends and possible future developments.

At the end of this start-up phase, eleven project groups were formed around the course participants’ emerging interests. During the second half of the autumn semester, these groups independently explored different aspects of this year’s theme; The Future of Computer Games and Computer Games of the Future.

The result of each group’s effort is a proposal and a scenario connected to the theme. These scenarios are presented as a chapter in this book (printed in a limited edition), as well as in a presentation that was held on December 16 in front of a live audience of more than 200 persons, consisting of younger students at the same educational program as well as teachers, guest lecturers and people from the industry. Documentation in the form of texts and other supporting materials can be found at http://futureofmedia.se/archive

The eleven scenarios that are presented in this book are not written in a purely academic form. They aim at being somewhere in between academic and a popular texts. These texts are meant to inform and entertain, but should also be grounded in references to relevant literature and the student's’ own original research and inquiries.

The chapters in this book have been produced as a part of a university course and under many constraints (including time pressure). We apologize for any remaining errors in the texts.

The teachers can be reached at the Department of Media Technology and Interaction Design (MID) at the KTH Royal Institute of Technology, Stockholm, Sweden.
.
Upplagd av pargman kl. 23:54