So what should I write about beyond commemorating the fact that this is blog post #400? I have re-read the previous two blog posts (above) to get some inspiration.

A thread in these blog posts is me lamenting the poor frequency of comments on blog posts. I was surprised about that back in 2013 but that's not the case any longer. Nowadays I'm instead surprised when someone does leave a comment on the blog. There are only comments on 7 out of the 52 blog posts that have been published this year and most comments consist (only) of one comment and then an answer by me. This is not a very lively place for discussions but rather very much a one-way channel where I publish things for you to read.

Another recurrent theme in these commemorative (?) blog posts is to have a look at trends and readership. Here are the latest figures: 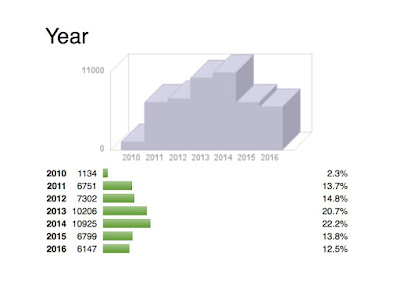 I could reflect on how the blog relationship has changed as well as of how my own use of the blog has changed over the last two years. I still have vague ideas about who reads the blog either regularly, irregularly or just stumbles across it (for some reason or the other) only once. I get a feeling many people visit the blog regularly (or irregularly) and that many also arrive here by following my Facebook updates about new blog posts. I sometimes meet people (acquaintances) who have clearly read my blog, but that's unusual (or they might not acknowledge that they have read the blog).

The pace of publishings has (from day 1) been to publish at least one blog post per week and at the most two blog posts per week. I'm most often at the two-per-week level because there seems to be an infinite number of things to blog about! Life as an academic is if not "exciting" then at least very varied!

Back in 2013 I wrote that blogging has become a way of life and a part of my weekly routines. That's certainly correct in that I can look at my calendar for next week and scan it for possible and probable "bloggable events"...  A difference now compared to a few years ago is that I have a much more elaborate blog post "production pipeline" in place. This makes it easier to produce 1+ blog posts per week. I never sit down in front of a blank blog post any longer but instead always have several possible topics (that could be developed into blog posts) jotted down in a draft blog post that exists for just that purpose.

Back in 2014 I wrote that "I'm not really sure what it is that people like about the blog". I still don't due to the scarcity of feedback. Now and then I do meet someone f2f who says they read/appreciate the blog but that is a rare occurrence indeed. I do know what reasons I have for blogging though because I wrote a blog post about it back in 2011 ("On the many functions of this blog") and most of it is still true. I would say that my top reasons for blogging both back then and right now are to:
- keep a diary and erect a repository (with resources/links) of what I do in my day-to-day, week-to-week, month-to-month and year-to-year academic life. The blog is for example a great resource when it's time to update my CV or negotiate about my salary.
- help acquaintances near and far away stay updated about my doings ("promote" my research).
- promote not just my personal research but the research area I am interested in (e.g. the intersection of "sustainability" and "computing").
- as an outlet for the pleasure I feel at expressing myself in writing! Much of what I write is "instrumental" - I write it in order to... something. This blog is different. I write it also just because I can and because I want to. No one expects or demands that I write certain blog posts - it's all rather about intrinsic motivation. Now it might be useful for certain instrumental reasons (see the reason above) but that's certainly not the primary function or the primary reason for why I blog.
- Also, this blog has become a perfect tool for the "third task" at Swedish universities (beyond teaching and research), e.g. "public outreach". An interesting dimension of "public outreach" is that the blog provides a source of inside information ("the dirt"?) on the job of a university teacher that students of mine can read (although I have no idea how many do).

I'm in fact amazed by how many read this blog (or rather about the # of page hits). Going back three months (to the middle of the summer!), the nine blog posta I wrote between mid-June and mid-July all have between 511 and 757 hits:

The 8 blog posts that were written six months ago (mid-March to mid-April) instead all have between 650 and 877 hits:

A few other notable reasons (mentioned already in the blog post from 2011) are that:
- My blog is my homepage (info center) on the web.
- My blog documents the books (and supposedly the articles) that I have read "recently" (I seem to always have a huge backlog).

One thing that confuses me right now (are there any search engine optimisation people out there) is that Google/Blogger provides me with information about traffic (how many hits a certain blog post has had) but so does a counter called GoStats and the numbers differ a lot. When I recently published a very popular blog post, it is to be assumed that almost all traffic for the following days consisted of people reading that particular blog post. For that particular blog post and those particular days, it looked as if Google/Blogger recorded twice as many visitors (unique page hits) than GoStats did. GoFigure. Does somebody know the answer to this enigma? The only thing I can think of is if many (many!) spiders crawl the web and load my blog posts and this is recorded by Google/Blogger but filtered out by GoStats(?). So the blog seems to be more popular than ever in Google/Blogger but not in GoStats (see the figures above)!?


A final reflection. Readership suffered from the blog absence/hiatus last year but looking closer at the actual production of texts (rather than just the two periods with a prolonged continuous total absence of blog posts) a clear pattern emerges:

Rather than saying there two periods of blog absence (between July 2015 and September 2015 and between December 2015 and February 2016), it's more fair to say that I was absent from the blog for a whole year, between mid-March 2015 and mid-March 2016, with the exception of publishing a handful (eleven) of blog posts during that period. My next comment feels a lot more personal that what I usually write about on my professional blog, but what is totally clear in hindsight is that my blog absence closely follows the progression of my father's cancer diagnosis. He underwent a complicated operation last spring, got better during the autumn but then got worse again. The total absence of blog posts between December and February closely mirrors his struggle with the return of his cancer and his demise in the beginning of the year. Who has time to...  what's the purpose of blogging when someone near and dear slowly fades away? This is indeed a sad and gloomy ending to this otherwise celebratory blog post.
.
Upplagd av pargman kl. 09:03