.
It's time for the annual self-preoccupied, inwards look at this blog. It's now officially a tradition since I did it last year too :-)   Since then I have also written another sum-up of blog activities when I managed to time blog post number 200 with the third anniversary of the blog (in September). This is blog post number 237. 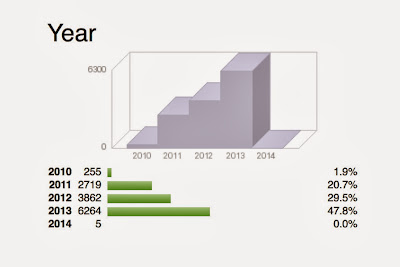 I think it's pretty incredible that since the blog was started 3.5 years ago almost half (47.8%) of all visits happened in 2013. That might to some extent be an effect of Facebook - I nowadays usually write a short status update on Facebook and leave a link to the most recent blog post.

Two reasons I managed to post 89 blog posts during 2013 was increased blog discipline plus the fact that I had a drive, a "blog week" in the beginning of November when I published a new blog post every day for seven days in a row. That counteracted the fact that I had been very busy for a couple of months before that and had a big backlog of stuff to write about. In last year's blog summary I wrote that:

I have painstakingly gone through the whole history of the blog again and the corresponding numbers right now are that of the 236 blog posts that have been published at this point in time:

I notice that four of the blog posts above are new to the list (I for some reason only had a top 9 list last year). Last year the cut-off limit to make it to the top 9 list was 198 page views. That very last blog post to make it to last year's list has since then garnered more than 200 additional page views. Some blog post are (apparently eminently searchable and continue to direct new visitors to the blog.

One conclusion is (thus) that there is quite a lot of inertia. Older texts that were popular "back then" continue to get new readers. Newer texts (6 months old or less) have on the other hand not had the time to get up to speed. In notice that all three blog posts that were published in 2013 and that made it to the list above were published during the first half of the year, in March, May and June.

All the curves are pointing up. This is ironic since I personally believe we are soon to wake up to the fact that this is the century not of (continued) exponential growth, but rather of peaks and declines. If that would sink in, I guess it would just make my blog more, rather than less popular in the short run.

The only complaint I have is that you guys never comment on anything any longer. Of the 90 blog posts that were published in 2013, only 10 have had people commenting on them and only one (1) person has commented on a single blog post during the second half of the year.
.
Upplagd av pargman kl. 08:01