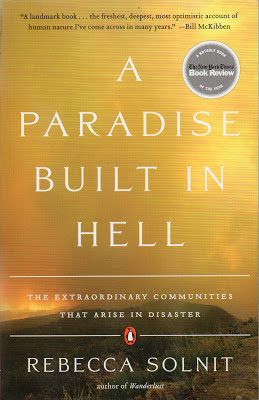 Rebecca Solnit's "A paradise built in hell: The extraordinary communities that arise in disaster" (2009) is a very interesting and unusual book. It not only conveys a very positive view of human nature, but it also does so based not just on hopes and wishful thinking, but on some pertinent case studies starting with the 1906 San Francisco earthquake, rounding the 1985 earthquake in Mexico City as well as other natural and man-made disasters, and ending with hurricane Katrina (2005) and its aftermath.

What Solnit argues is that as a (natural) disaster strikes, only a small proportion of the people are actually killed, and despite the grim results of the disaster, the experience of coming out unharmed can be liberating and sometimes life-altering for the individual. Everyday worries recede into the background as people focus on what is really important - helping family and friends, as well as neighbors and strangers in need. Everyday "normal" societal roles and appearances suddenly seems petty and a carnivalesque can-do!-help-thy-neighbor attitude can grip the energized survivors. What makes this perspective so interesting is that it totally contradicts the more traditional view of "the mob" and the dangers of people spontaneously congregating.

"in many disasters [...] how you behave depends on whether you think your neighbors or fellow citizens are a greater threat than the havoc wrought by a disaster or a greater good than the property in houses and stores around you. [...] In the wake of an earthquake, a bombing, or a major storm, most people are altruistic, urgently engaged in caring for themselves and those around them, strangers and neighbors as well as friends and loved ones. The image of the selfish, panicky, or regressively savage human being in times of disaster has little truth to it [...] disaster is sometimes a door back to paradise [...] in which we are who we hope to be, do the work we desire, and are each our sister's and brother's keeper."

One of the greatest threats in the aftermath of a disaster can instead be elites and "elite panic", i.e. elites' beliefs regarding the dangers and the irrationality of "the mob" (also supported by movies and television series conveying images of widespread post-disaster panic and disorder). Powerful people not seldom call in the troops to "bring order", thereby making a bad situation worse: "the elite often believe that if they themselves are not in control, the situation is out of control, and in their fear take repressive measures that become secondary disasters." People (friends, neighbors, acquaintances) oftentimes know what's needed to help themselves and their neighbors in the aftermath of a disaster, but lack resources. The struggles between elites and the common people are however as intelligible as they are infelicitous. It is in the nature of disaster to disrupt ordinary power structures and chains-of-command. If ordinary persons - by necessity - then take power in their own hands, at some point there will be struggles when the old order attempts to "take command" of the situation. 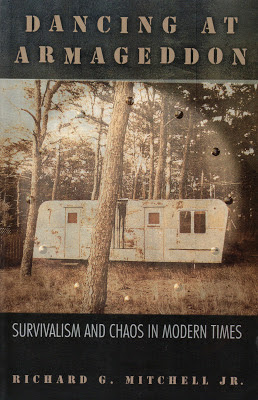 Richard Mitchell Jr's book about American survivalists is masterful. It is a book "about troubles that might be coming to America, the people looking forward to them, and the aspects of modernity that condition both." It's about survivalists, but it's also a book about modern society and people who opted out or were left behind. Mitchell lived and interacted with some of them for more than a dozen years before he wrote "Dancing at armageddon: Survivalism and chaos in modern times" (2002) (here's a nine-page excerpt from the book). One of his many keen observations is that you can't trust what survivalists write about themselves. If you want to know what they're about, you have to talk to the people and participate in their practices. Furthermore, since privacy, secrecy and seclusion are important concerns for many survivalists, they "do not accommodate themselves readily to favored methods of social science research" such as surveys and standardized interviews.

To Mitchell, survivalists are primarily storytellers. It can be hard to find meaning in your life in this day and age, and more so if you are an un- or underemployed (male) working class American living in heartland America (e.g. not on the buzzing high-tech and service industry hubs on the east or the west coast). Each survivalist has their own personal theory about how life-as-we-know-it will end (including "invasions from within, abroad, or above"), but they are all great at telling themselves and each other stories about how their particular knowledge, skills and carefully stored artifacts will become extremely important and pertinent after "the shit hits the fan" and business-as-usual is dislodged. Survivalists are the heroes of the stories they themselves spin.

"Survivalism is centered on the continuing task of constructing "what if" scenarios in which survival preparations will be at once necessary and sufficient. This is a tenuous process. Survivalism depends upon scenarios built on middle ground, delicately fashioned to fall between the extremes of disbelief and despair [...] Problems ahead must be defined as both urgently compelling and manageable in scope, neither trivial improbabilities nor certain destruction."

The book is packed with interesting observations, including survivalists' relationship to "prepping" (storing food and other post-collapse necessities), to each other, to society-at-large, to commercialism within their own ranks, and not the least survivalists' particular relationships to guns. Mitchell gives a deeply insightful view of everything he sets out to do, including the impressive tensions and contradictions between "theory" and "practice" at a survivalist get-together weekend-long camping-in-the-woods as well as nominally para-military practice session:

"He quoted assorted passages verbatim from a short stack of advance armored infantry training manuals. His talk was impressively complicated. He used military slang and acronyms without elaboration and technical terms without definition. [...] With concentration and ten years' experience teaching this topic, I could follow most of what he said. [later] We marched on survivalist time: creep-walk ten minutes, wait for stragglers, rest ten minutes, repeat, always in slow motion. An hour and a half after we received our orders, we had progressed only three hundred yards [later me and my partner/research colleague] wondered how the participants could be satisfied with a weekend so apparently confounded, disorganized, and contradictory?" 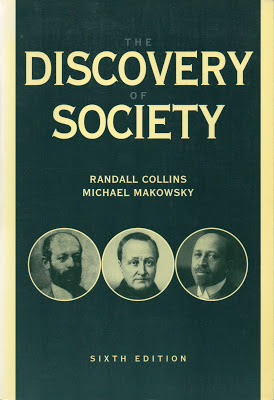 Randall Collins and Michael Makowsky's "The discovery of society" is a textbook I bought waay back. I read the 6th edition which was printed 1998. I bought it when I was a ph.d. student, I read a few parts of it back then but I notice that I didn't refer to it in my ph.d. thesis. It is one of those books that didn't really get read at the time and that has warmed my bookshelf largely unread for more than a decade. The first edition was published in 1972 and a new, updated edition has been published every five year or so since then. In fact, there is now an eighth edition out (published in 2009) and I have no idea how the latest edition differ from the sixth edition that I read.

The book contains sixteen chapters, most often based on a portrait and on the theories of a dead white man. Most chapters have neat subtitles, like "Conquistador of the irrational" (Freud), "Sociology in the underground" (Marx), "The last gentleman" (de Tocqueville) and "The disenchantment of the world" (Weber). New to my (the sixth) edition is (for example) two chapters on African-American sociology and "The impact of women in sociology".

There isn't that much to say about the book - it's a pretty good overview of the historical origins and the growth of sociology as a discipline. I personally think that the former part of the book, about the 18th and the 19th century origins of sociological thought, were more interesting than the last part of the book about the 20th century. The book is not a particularly easy read, but each chapter has a great resource in the form of high-quity "further readings", i.e. "if you are interested in Comte/ Nietzsche/ Durkheim/ Simmel/ Mead/ Goffman, the most important biography is... [...] Important secondary sources include...".
.
Upplagd av pargman kl. 21:32