.
"Books I've read lately" is a recurring topic and here is the previous blog post (same topic, different books). I have some more catching up to do - I read the three books below before the summer (≈ April) - but I'm slowly catching up! From now on I will link all book titles to Adlibris instead of Amazon since that's where I buy them for the most part. 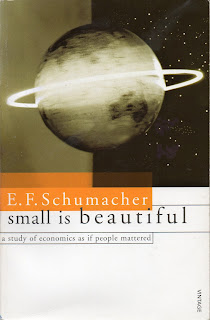 E. F. Schumacher's "Small is beautiful: A study of economics as if people mattered" (1974) is a classic and has been reprinted at least half a dozen times. Although some parts (references, some perspectives) are dated, rooted as they are in a 60's and 70's discourse, the book is still on the whole very pertinent and I'll prove that with some "subversive" quotes by this clearheaded thinker who is not satisfied with that with which "everyone" agrees ("it's common knowledge that...", "we all know that...").

On pollution:
"the changes of the last twenty-five years, both in the quantity and in the quality of man's industrial processes, have produced [...] a situation resulting not from our failures but from what we though were our greatest successes."

On "using up" renewable and non-renewable resources:
"the modern industrial system [...] lives on irreplaceable capital which it cheerfully treats as income. [...] If we squander our fossil fuels, we threaten civilisation; but if we squander the capital represented by living nature around us, we threaten life itself".

On the iron grip of economic thinking in society:
"if economic thinking pervades the whole of society, even simple non-econoimic values like beauty, health, or cleanliness can survive only if they prove to be 'economic'". Fast forward to 2012, nature is today oftentimes treated as "valuable" only if we can put a large price tag on the "ecosystem services" it provides us (i.e. it has no value in itself except for the value it provides humanity).

On denying the possibility of scenarios we prefer not to think too much about:
"As nothing can be proved about the future - not even about the relatively short-term future of the next thirty years - it is always possible to dismiss even the most threatening problems with the suggestion that something will turn up."

The book mostly treats issues in the intersection of ecology ("natural capital") and economics, but Schumacher doesn't shy away from tackling a plethora of hard questions head-on, like how to "disarm" greed and envy in society, on the pathology of measuring progress in terms of (increased) GNP/GDP, on how to restore dignity at/in work, on the structural problems of large-scale aid programs to "raise" poor countries to western levels of affluence, and on how instead to really eradicate poverty in the world. I'll end with a couple of well-formulated Schumacherisms:

"The amount of real leisure a society enjoys tends to be in inverse proportion to the amount of labour-saving machinery it employs."

"The richer the society, the more impossible it becomes to do worthwhile things without immediate pay-off." 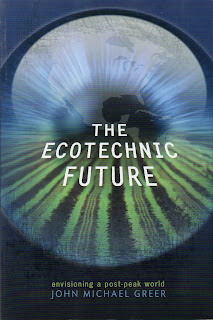 Two years ago I read John Michael Greer's "The long descent: A user's guide to the end of the industrial age" (2008). It was very good and I thus recently read his "The ecotechnic future: Envisioning a post-peak world" (2009). He has already published yet another book, "The wealth of nature: Economics as if survival matters" (2011) that I expect I will buy and read in due time. Do note the subtitle of the last book. It of course harkens back to Schumacher's book (above) of which Greer is a fan (and one of the reasons I read these two books back-to-back). Greer has in fact written many books, almost two per year during the last 10 years - but most of them are of little interest to me. A title like "Atlantis: Ancient legacy, hidden prophecy" would probably have interested me when I was 12, but that's a long time ago.

But Greer is a great writer and "storyteller" and it is a pleasure to read his thoughtful books despite the terse message he delivers. Greer doesn't have final chapters about how "we are approaching the limits". In "The ecotechnic future", all cards are on the table and the first chapter is called "Beyond the limits".

If the forest is on fire, opportunistic species (invasive weeds and other fast-growing "R-selected species") will in the aftermath quickly move in and establish themselves. This will ready the ground for latercomers who will eventually smother the firstcomers. "If nothing interferes with the process, the [land] will pass through as many as a dozen distinct stages before it finally settles down as an old growth forest a few centuries in the future". "K-selected species [instead and as apart from R-selected species] grow slowly, take years to reach maturity and endure for centuries if undisturbed".

In Greer's opinion, modern industrial society is R-selected and "can best be described as a scheme for turning resources into pollution as fast as possible". Greer's basic idea around which he structures the book, is that when our current abundance of energy and natural resources soon will start to dry up (or become increasingly expensive), our society will also pass though a number of stages in its "decline" to a lower level of energy and resource use (a K-selected, mature, stable society). We'll loose much of our high-tech on he way, as "'advanced technology' and 'extravagant energy use' have been for all practical purposes synonyms" for more than a hundred years. in fact, Greer proposes that our society will pass through a number of stages on the "downslope"; from 1) modern industrial society to 2) "scarcity industrialism" to 3) "salvage society" and finally (hopefully) to an "ecotechnic society".

I have basically summarized the first two chapters, and the rest of the book outlines how this process could unfold. Greer is very well-read (and especially inspired by ecology and history), and he is very convincing even if much of what he writes about in this book naturally comes with a big disclaimer since he not only writes about the future (which by definition is unknown), but also about a future that is disruptive/not an extrapolation in relation to what we have experienced during the last 100+ years. This is a great book and I highly recommend it. Those with a tight budget can instead read his blog. Many of the ideas from his books are "prototyped" on the blog a year or two in advance in his weekly (long) blogposts. An old favorite of mine treated the topic of "harnessing hippogriffs", i.e. how to get the best out of a hippogriff - the splendid mythical creature that is the offspring of a gryphon and a mare. Hippogriffs would be a great way to get around but for one small problem - they doesn't exist! Entertaining thoughts of how to best harness hippogriffs are thus just as fruitful as some of the high-tech energy pipe dreams that gets thrown around in the debate today (e.g. carbon capture and storage (CCS), algae, biofuels, hydrogen, breeder reactors, fusion reactors, large-scale renewables etc.). 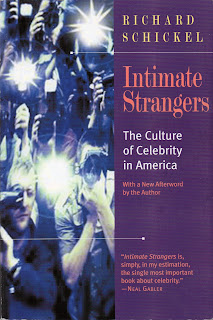 The final book in this blog post is Richard Schickel's "Intimate strangers: The culture of celebrity in America" (1985). I read the revised edition from 2000, but it was still a disappointment mainly because I had the impression the book would be a book about para-social relationships - the feeling you have of "knowing" a celebrity (politician, musician, actor, sports star) whom you have "met" many times through mass media, but never "in real life". It feels like you know that person, but he or she definitely doesn't know you - as you have never met beyond a one-way mass-media "connection". As to my interest in this topic, please see my master's thesis proposal about "Para-social Facebook relationships".

The first chapter was interesting, discussing for example John W. Hinckley, Jr's attempt to assassinate president Ronald Reagan in 1981. Hinckley's motivation was to impress movie star Jodie Foster to whom he "felt close" (para-socially), but who naturally ignored him (and he felt slighted). The main part of the book contains little social analysis of depth though and more of film critic Schickel's attempt to write with "flair" about the modern American (US) history as seen through the lens of specific celebrities (JFK, Andy Warhol) and with a (US-centric) emphasis on motion pictures and movie stars (Charlie Chaplin, Marlon Brando, Marilyn Monroe). The style of writing felt rambling and introspective to me, opportunistically touching on one topic and next hurling over to something else. I was pretty tired of the book when I finished it. The total absence of references did nothing to raise my opinion about the book.