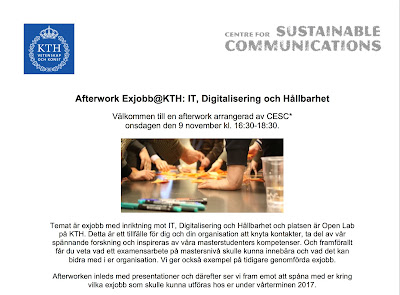 We had the best event but the worst timing ever!

I supervised five master's students who wrote their theses in the intersection of ICT and sustainability this past spring. Three out of five had a research project as their principal. That means the task they worked on for half a year originated in a KTH research project and that they got additional help (to varying degrees) not just from me as an advisor but also from the people who worked in the research project in question. Several students were delayed (one started late) and most presented their theses after rather then before the summer. My previous two blog posts are about the outcomes of two of these theses, e.g. two proposed paper that we have now submitted to the conference "Energy for Society" (paper #1, paper #2). It could very well be the case that at least one and perhaps in fact two additional paper might come out of the remaining three theses!

Most of our students write their master's (as well as their bachelor's) theses during the spring term and they start looking for topics around this time of the year (or earlier). Many students prefer to write their thesis with a company as the principal since they want work experience and perhaps also a crack at a good job in an interesting company.

So this year we decided to up the game and do our best to find master's thesis proposals (in the intersection between ICT, digitalization and sustainability) at companies. Our solution was to invite companies with interests in this area to an After Work event (on Nov 9). I think the idea is ingenious and there are quite a few reasons also for companies to have engineering students do their thesis work with/for them. But many companies don't know exactly what a master's thesis entails, how to put together an attractive offer, at what time of the year to do it as well as various other practical issues.

So we had the great idea to organize an After Work event for companies to tell them some about what our students can do for them and how they should go about to formulate master's thesis proposals that would be interesting and attractive to our students. And that was just the first hour of the After Work, during the second hour we would circulated among the participants and then-and-there helped them formulate great master's theses proposals. And we did it! I think the program for the After Work was brilliant and that we delivered on the promise. There were only two problems with the execution of the event. The first problem was that we had only a limited number of persons/companies signing up, but I didn't think that wasn't a problem - if ten or a dozen persons/companies show up and we manage to convert each into a thesis topic/proposal and we manage to find/recruit students to write their theses at these companies, well, then we would have a really great case both for our students and for other companies come next year.

The second problem was however that several decimeters, perhaps upwards to half a meter of snow fell in the 12 hours preceding the event ("Snowpocalypse" - see great pictures here). Public and private transportation (buses, trams, trains, cars and to some extent even the subway) was crippled, if not paralyzed on this particular day! Many people were snowed-in and could not get to work or home or move in-between different parts of Stockholm. Only half of the people who had declared they would come actually showed up. People from KTH (me, Elina, Hanna, Mattias, Miriam, Tina, Mario, Robin) (barely) outnumbered out external corporate guests.

So, the idea was great but I have concluded that the best way to frame the event this time around is to regard it as a test round. We should analyze what went wrong (and what we could have done better) - beyond the weather - and plan for a better, bigger, bolder, beautiful event next year. Also, it should be organized not in the beginning of November but two or three weeks earlier (mid-October) to get the timing right! 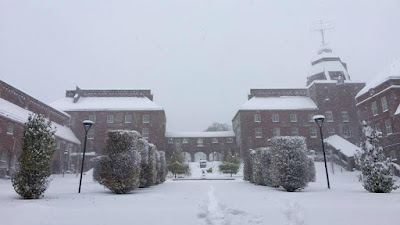