Before the Flood (movie) 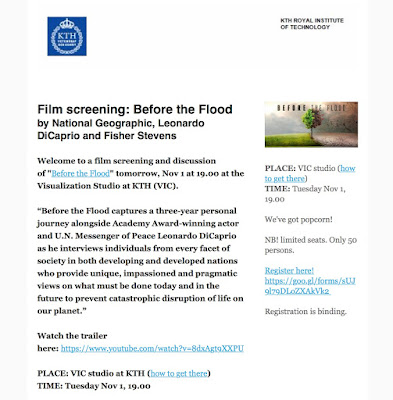 We organized a movie night tonight at KTH and screened the brand new documentary "Before the Flood" for a limited number (50) of our students. We saw the movie in the KTH Visualization Studie (Facebook group) and watched it on their huge 4K screen.

Leonardo DiCaprio narrates the movie and it is presented by National Geographic. It's possible to stream the film for free on the National Geographic Channels and on YouTube etc. until Nov 7 so go see it! You can start by checking out the 3-minute trailer and here's the movie's official blurb:

“Before the Flood captures a three-year personal journey alongside Academy Award-winning actor and U.N. Messenger of Peace Leonardo DiCaprio as he interviews individuals from every facet of society in both developing and developed nations who provide unique, impassioned and pragmatic views on what must be done today and in the future to prevent catastrophic disruption of life on our planet.”

The movie has a homepage as well as a Facebook group and I brought my kids (13 and 9) to watch it. Their reactions were very different. The elder thought it was "shocking" will the younger thought it was endlessly boring (not "boring" but bo-ring). The students seemed to like it though. I'm sure many would have appreciated a short discussion or perhaps someone suggesting that those who wanted to could continue somewhere to discuss the movie over a beer. I had my kids to think of so I had to hurry home but I would otherwise have loved to suggest that. Also, we had had very little time to prepare for the movie and so we hadn't much thought about what would happen after the movie before the move - we were just amazed that we managed to get it all together with such short notice. If fact, how the event came together is interesting in itself.

I wrote a blog post more than three years ago (in February 2013) called "I'm an activist!". Beyond the issue that I was engaged in at the time, I also reflected upon how easy it was to organize ourselves with the low-cost social media tools that nowadays help us coordinate and make what was once exceedingly difficult soo easy. The same thing happened in the run-up to this movie screening.

My colleague Elina posted the trailer on Facebook Friday evening (four days ago) at 19.45. A little later (21.15) she asks another colleague of ours, Mario, "if it would be possible to watch it in the visualization studie sometime during the upcoming week". Mario answer "yes, of course" around midnight. I dive into the discussion Saturday morning (at 10) and start to structure the week (pros and cons of selecting different weekdays). After lunch Elina creates a Facebook chat channel with four members; herself, me, Mario and Erica-Dawn who works at KTH Sustainability Office and has access to contacts and (some) money. Things then just happen by itself, with everybody pitching in with questions, comments, answers and by offering up resources. At 18.30 I created a Google document, sifted through the Facebook discussion that far, structured up the available information and identified missing information.

Sunday for the most part was a day of resting but on Monday Mario prepared the studio and Erica-Dawn poured the information into an invitation (see above) and  disseminated the invitation (we had together suggested suitable channels, including disseminating it to my colleagues at MID4S and CESC). Erica-Dawn also secured serious amounts of popcorn and we were all set! I didn't do that much but I did have the pleasure of being able to invite the 60+ students who take my brand new course (it stared Monday) to an exclusive movie screening during the very introductory lecture of the course - one day before the screening. Although it kind of felt like I slacked off Sunday-Monday, I guess I'm doing my bit by documenting the event, i.e. by writing this blog post!

It's pretty cool how it all came together so quickly and with so little effort. It was the right people with access to the right tools and the right resources and things then kind of just happened by themselves. So I guess this blog post is written in praise of lightweight social media tools, of my great colleagues at KTH, of DiCaprio (and the movie producers and National Geographic) and of course also the 50 or so students who showed up and filled up the room. Thank you all! 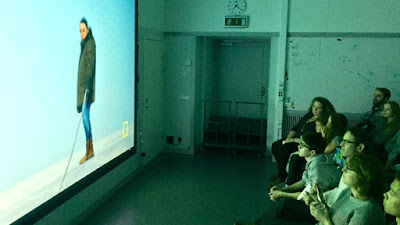