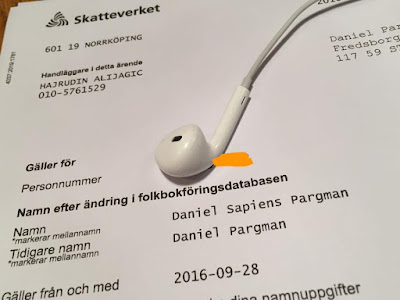 I've changed my name. I've always only been "Daniel Pargman". It has not been a great source of concern for me, at least not for a couple of decades, but I did suffer some mild phantom pains during my childhood due to the fact that I didn't even have a measly second name (not to mention having a third). I was slightly jealous and it definitely felt like everybody else had at least two names.

My brother had a children's book about "Tiger Truls" and he want my second name to be Truls when I was born - but my parents vetoed it. Truls is apparently an old viking name (harking back to the name of the god Thor). Partly to compensate for my own lack of additional names, my kids each have three names...

So I applied to change my name on a whim and asked to add another name at the end of the summer. I can't really remember my train of thoughts but it had something to do with distinguishing myself from other Daniels and also about distinguishing myself from future androids and robots (or making sure the aliens will really know I'm human when they come) so I applied for adding "Sapiens" to my name. Daniel Sapiens Pargman. Why settle for a new name instead of forming a new species? I told my wife I wanted to add another name and she supported it - but her suggestion was "Valentino". I believer that I did not, at the time, tell her I had already submitted my application. When I told her, she at first didn't believe me, laughed and thought I was joking. As it happens, I got the letter the better part of two months ago but it was very nondescript and I must have missed it when I paid the bills last month so I only saw it a few days ago.

Sapiens means "wise". I guess this also means I have to read the hugely popular book "Sapiens: A brief history of humankind" that Yuval Noah Hariri has written about me. Also, my new name shouldn't be pronounced as two distinct and separate words but rather the same way you pronounce "Homo sapiens", i.e. as if you almost treat it as one single word; homosapiens. So that's danielsapiens to you - but I don't expect to actually be called anything but "Daniel" except at special occasions (haven't figured out which yet).

The one question I ponder right now is how to use my name professionally. The most pressing question is if should continue to author scientific papers as "Daniel Pargman" (safe), as "Daniel S. Pargman" (nondescript) or as "Daniel Sapiens Pargman" (out there). What I wonder is if scientific search engines (e.g. Google Scholar) will fail to understand that "Daniel Pargman" and "Daniel Sapiens Pargman" is one and the same author. It might be similar to the challenge that (mostly) women face when they marry and take the name of their husband, but then again it might not. I have, after all, not changed my family name but rather only added another name to my surname. Still, could this create "complications" with attribution and recognition? If anybody has any ideas or know the answer, do drop me a line - for example by writing a comment to this blog post.


PS. I just became aware of the first task-and-expense that follows from having changed my name. I have to upgrade (renew) my driver's license so that it reflects my change of names. A small cost (20 USD) and I also have to get a photo and fill out some paperwork.
.
Upplagd av pargman kl. 23:20