My docent lecture (here it is!) 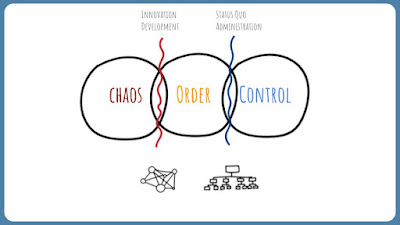 I recently wrote a blog post about the process (in general) as well as a bit about my process of becoming a docent. The official decision (signature on paper) was taken om February 4, but the public memory of the event will instead be associated with the public docent lecture that was held on March 16. Here's the official invitation to my docent lecture: 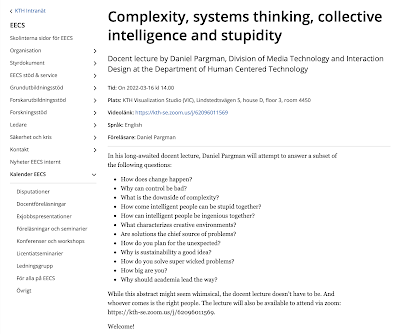 Image: The invitation to my docent lecture (March 16)

The lecture was held in the KTH Visualization Studio and it was recorded (thank you Ingemar Markström and Björn Thuresson!). Even if you couldn't attend the lecture then-and-there, it's still possible to watch it on YouTube. Or you can watch it right here!

I guess this blog post could end here, but you won't get away that easy! I'm thinking I have various audiences and objectives (e.g. people to convince) at this point:

I believe I don't have to work too hard to convince people in category 1 and 2. For people in category 3 and 4 I can disclose that I originally wanted to call the docent lecture "Why KTH sucks - and how we can save it!". That's a title that could definitely intrigue and draw in an audience, but who knows, perhaps there are some people who work at KTH who don't have a sense of humor? In the end I got cold feet and renamed the docent lecture "Complexity, systems thinking, collective intelligence and stupidity", but the lecture still has same contents (the "stupidity" part of the title could be seen as answering the question "Why does KTH suck?"). I also posted a dozen questions in the invitation (see above) of which I in the end got around to answer (or grapple with) about half, including the questions "How big are you?", "Why can control be bad?" and "What is the downside of complexity?". See the lecture to learn the answers to these and other questions!

Much of the talk uses different variations of the image at the top of this page as a starting point for discussion about the relationship and tensions between "control", "order" and (creative) "chaos" - or between "management" and "innovation". 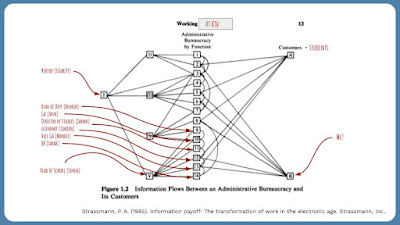 A jumping-off point for these musings are (yet again) the course "Art of Hosting: Harvesting conversations that matter" that I took back in December. But I have to say (for the protocol) that I have been thinking about these topics for much longer and that I wrote a series of blog posts on more or less the same topics more than 10 years ago (in June 2011), e.g. The folly of our Education Assessment Exercises (EAE), Top-down vs. bottom-up, The paradox of planning and On the fallible nature of tests and testing.

This is also a topic I have circled back to many times, including in a blog post from December 2011, Gripe session vs course evaluation, in two blog posts from September 2012: Writing research grants applications = wasted time? and My price tag, in the blog posts MID department retreat and reflections of organisation (June 2016), Open letter to my dean - spare us from excessive administration! (Aug 2016) and Leadership for associate professors (Dec 2017). And probably also as a sub-topic in other blog posts that I have forgotten about, including in the notes for a proposed blog post, "Bureaucracy 2.0", that was never finalized but that was/would have been heavily inspired by Jonas Söderström's Swedish-language book and his blog posts from back then (here, here, here and here) - and he keeps going with these brand new 2022 texts about idiocracy and documentation frenzy in the Swedish public school system (here and here).

No one has explained this outpouring of collective stupidity better than historian Robert Conquest, whose third law of politics sensibly and insanely states that "The simplest way to explain the behavior of any bureaucratic organization is to assume that it is controlled by a cabal of its enemies".

I believe that I have written less about these topics during the last five years not because I have less to complain about, but because I have become more tolerant and/or found other ways to handle idiocy. By "more tolerant", it could be that I have become more laconic and have come to regard brainless adminstrations as a regrettable but inevitable part of the job, sort of like a farmer might regard bad weather, e.g. something unfortunate that is part of life and that has to be overcome with a minimal work effort. As apart from the weather (can't be fought), brainless administration can perhaps be resisted and then possibly with inspiration from "everyday forms of peasant resistance" (including foot dragging, lateness, false compliance, dissimulation, unpredictability, feigned ignorance, non-communication and so on). When it comes to "other ways to handle idiocy", it could be that I have developed better tactics or become more skillful at handling, rounding or evading brainless administration, or, that I have found alternative ways of personally handling brainless administration (e.g. humor, laughter, ridicule, derision, irony and carnivalistic irreverence). Such strategies don't solve the problem or change the world per se, but they make it easier to handle idiocy on a personal level. It could however be that I am now leveling up and raising the bar - since I will start a course in stand-up comedy later this month! I hereby vow to make this fight public, and I can already feel how the powers-that-be are starting to shake with fear at that scary prospect! More on this later - and don't forget to keep your eyes open for my upcoming Netflix Christmas Special where I mercilessly ridicule excessive administrative routines to an audience that roars with laughter!

My own suggestion for a goal worthy of striving for, "admin sufficiency", is (with inspiration from Lange and Santarius) instead:

This is both my recipe for a better world and for "how we can save KTH"!
Oh, and I also made two abstracts for my docent lecture. This is the one I did not use:
Abstract: In his long-awaited docent lecture, Daniel Pargman will be spinning a complex web of cryptic obviousness, spanning a campus wide web of collective sensemaking, spamming a tight web of contagious nonsense, spoofing a comprehensive tale of counterfactual could-have-been’s, spearheading a singular contribution of clarifying visualizations, scouting a chaordic path to systemic intelligence and spurning the spurious idols of static stupidity. And more.
And while the abstract might be whimsical, the docent lecture doesn’t have to be. And whoever comes is the right people.
Welcome!