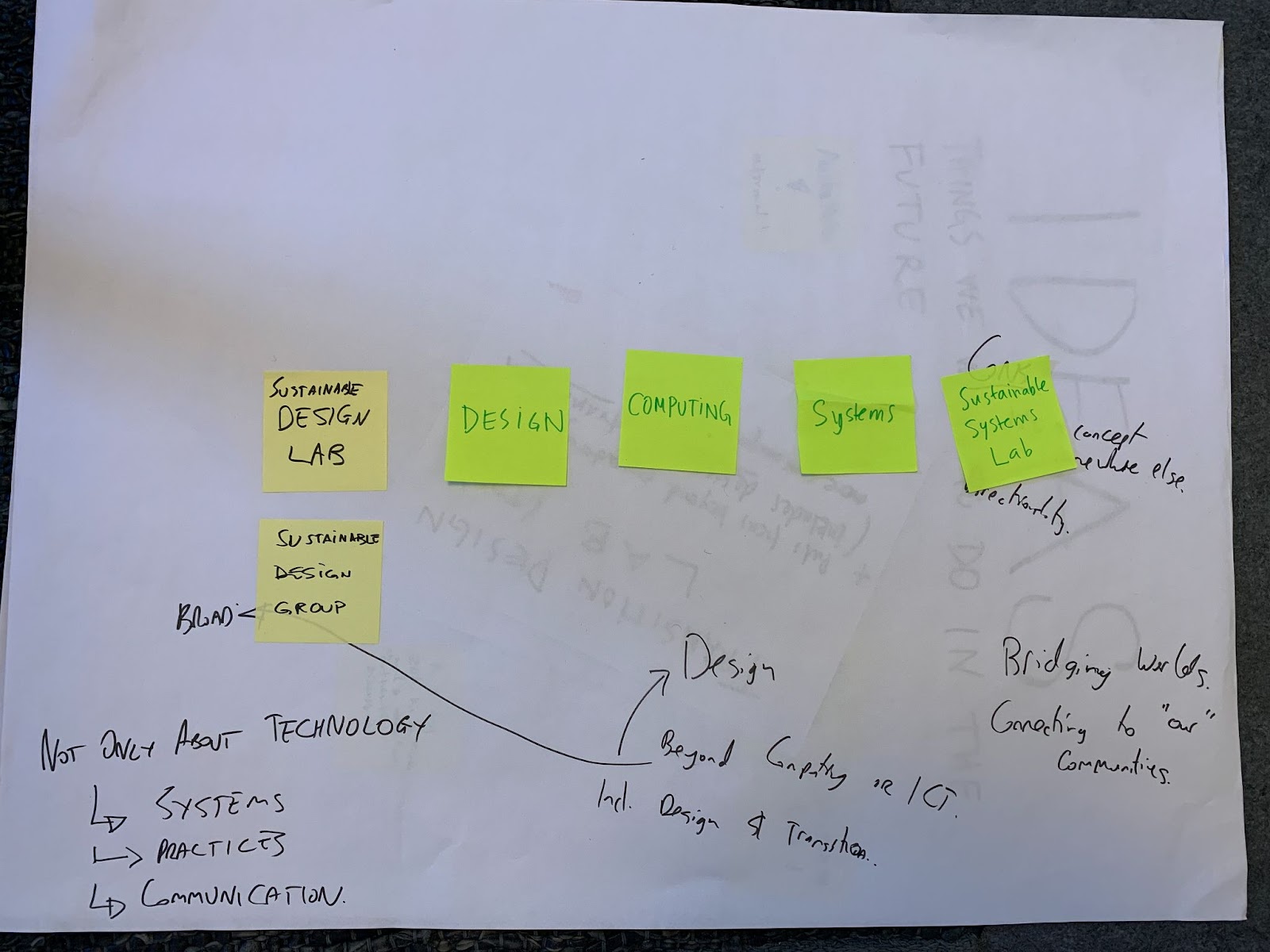 Image: Brainstorming a new name for our team/research group

On January 1, 2020, I wrote a blog post, "2019 - the year MID4S levelled up". That blog post included the history of our team - a team which, during the last few years, has turned into a research group with a portfolio of ongoing research projects.

In a blog post from December 2013 ("MID4S - MID for sustainability"), after we had had our second annual kick-off, I wrote that the team started in mid-2012, but we only named ourselves MID4S (Media Technology and Interaction Design for Sustainability" at that end-of-the-year 2013 workshop.

A lot has happened since then and this is not the place to summarize it all, but, we have for some time felt that we have grown out of our name, MID4S, which suffers from the fact that the name makes very little sense if you don't already know that MID is the name of our department ("Media Technology and Interaction Design"). The "4S" ("for sustainability") certainly comes out of the fact that many of us had attended the first International Conference on ICT for Sustainability (ICT4S) in Zürich in early 2013 (the upcoming Eighth ICT4S conference will be held in mid-June in Plovdiv, Bulgaria).

MID4S works well internally at our department, but the problem now is that we need to be able to talk about  and present our research group with people outside our own department, outside of the School of Electrical Engineering and Computer Science and with people at other universities (including abroad) and "MID4S" then just doesn't cut it and that we have grown out of it.

I think we started to discuss a name change in the autumn but it has only seriously become an item on the agenda this year. We had a team meeting in the beginning of the year that resulted in (I kid you not) 30 proposed names that team member Minna Laurell Thorslund documented (the majority of the suggestions came from her). It's great to have options, but how do you go from 30 names to one?

I don't know how you would go about but we are researchers so we advance slowly and systematically. We thus obviously created a short list of criteria to use for evaluating the various suggestions ("Suggested requirements for the new name"):

Some might feel that a list with 10 different criteria is exaggerated, but during the last month us sloth-like academics have moved into supersonic overdrive!
Individual workshop preparations before our March 24 Reboot (documented as part of this blogpost) included figuring out our personal favorite and formulating a justification of our choice of name. Rob Comber then shepherded us through a step-wise process where we concluded that our name should start with "Sustainable" or "Sustainably". The advantage is that you can then zone out or go to sleep after you've heard the first word but still know something about what we do. It was considerably harder to figure out what comes after "Sustainable" (see the image at top). Is "computing" (broadly interpreted) what we do and something that can unite all of us? After a long process that involved many persons we finally landed on "Sustainable Design Lab".
The very day after, co-team leader Elina Eriksson suggested a name that came to her when she was out running and team member Leif Dahlberg (who was absent from the Reboot) contributed with yet another name. That meant we had ballooned from one to three names again and before our April 5 MID4S team meeting I sent out these following instructions:

We had a physical "MID4S Reboot” 10 days ago and I wrote a little about it in this blog post. This was a meeting only for the people who currently work at the Division of Media Technology and Interaction Design (MID) and one of the things on the agenda was to choose a new name for the group.

We did choose a new name, ”Sustainable Design Lab”, but after the meeting, two new suggestions appeared so there are now three suggestions:

At tomorrow’s MID4S meeting, the main point will be to discuss what name we should choose. While everybody is welcome to listen and talk [...], deciding upon a new name is the main action point on the agenda and if it comes to voting, then only people who currently work at the department have a vote!

It still proved too painful and to make the final choose at that meeting, but we did manage to remove "Sustainability Lab" from the shortlist. Elina then put it to a vote among the MID4S core members (in our Slack channel) that very same day, but a few persons were very slow at responding so it wasn't until yesterday that Elina finally put her foot down and announced that our new name will from now on be "Sustainable Futures Lab" (SF Lab).
We will from now on use this name and we will also start a new team blog. We have a plan for making the blog a hip place to go instead to learn more about what we do instead of a stagnant backwaters - which for the most part is what our current blog has turned into. We might migrate a small part of the contents of our current blog, but will for the most part start with a clear slate.
So there it is.
The king is dead - Long live Sustainable Futures Lab!
.
Upplagd av pargman kl. 20:55