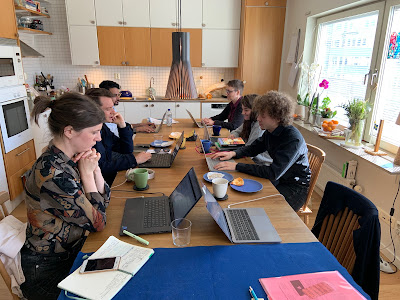 Hoffice (home office) is an excellent concept that was started in 2013 by Christofer Gradin Franzen. My kitchen table (and balcony) became a pop-up office for a day this past week when I invited my colleagues to come and work in my home (here's a good Swedish-language description of the methodology). I'd say most people mostly worked with tasks that required reading and writing (including mail etc.) in work sessions that were interspersed with coffee breaks. More specifically we initiate 40-minute silent work sessions that are preceded by "pledges" that we follow up (e.g. "for the next 40 minutes I will work with revising and shortening the paper I will submit to a conference next week").

I really like the Hoffice concept and it works well for our (extended) research group. It also for example means I get to meet with Tina now and then (see image above) - despite the fact that she doesn't work at KTH any longer and have few reasons to go there and meet up with old colleagues. It's also nice to meet your colleagues in a different setting and in a different way than what we usually do. Finally many things can be worked out or new ideas can be generated when many people work together or when you meet someone you haven't talked with much lately. I would want to extend the invitation to Hoffice a bit broader (e.g. to other friends I have in Stockholm) but haven't figures out how to practically make that happen without setting up some cumbersome administrative structure. Perhaps I should announce an upcoming Hoffice among my friends on Facebook (but not to the whole world)?

This was anyway the second Hoffice during the month of April when I invited colleagues to my home, and I have scheduled two more full-day Hoffices in my home during the month of May. We meet between 9 and 17 and then have lunch together in one of the nearby restaurants. Sometimes people can only come for half the day and that's ok as long as there is space left around the table.

I currently operate on the assumption that 8 persons can fit around my maximally extended kitchen table - because I only have 8 kitchen chairs. But it could in be possible to squeeze another few persons in if I had a few more chairs or if it's ok for some to sit in the sofa or the chaise longe or on the balcony. There has this far only been 7 persons attending the April Hoffices.

I have considered using the official Hoffice Stockholm Facebook group to "fill up" a Hoffice event if few colleagues of mine sign up, but it also feels silly to write an "ad" and offer a workspace for, say, an additional two persons, so I will have to think a bit more about that. But nothing stops you from signing up to the Hoffice Stockholm Facebook group and then organize a Hoffice of your own around your kitchen table (or attend someone else's)!

Looking through the blog, I was reminded of the fact that I submitted a paper (actually an "extended abstract") about Hoffice to a conference 5 years ago, "Strangers are welcome: hosting pop-up offices in the Hoffice network". It was written together with a master's student, Emma Lundin, whom I supervised when she wrote her thesis and we then wrote the extended abstract together. It was accepted, but we had to retract it because in the end it turned out none of us could go to the conference and present it. But the abstract in fact describes Hoffice neatly and here's the two paragraphs that are most relevant to this blog post:

Hoffice was started in Stockholm at the end of 2013 and it is based on offering the possibility of working for free in other people’s homes. Hoffice helps people arrange impromptu “home offices” where hosts share their kitchen table and other workspaces resources (internet connection, microwave oven and not the least their company!) with people who can “book” a seat for the day. The purpose of these work events is to create free workspaces as well as social, structured and disciplined work environments that allows individuals to benefit from others’ support and intelligence. While Hoffice groups nowadays exist in many different cities and countries, the Stockholm group is the largest and most active group with almost 2000 members and multiple Hoffice events being organised each week.

In order to organise Hoffice events, many resources must come together of which some are more obvious than other. There must of course be a sufficient number of members, suitable dwellings and a digital (online) platform that supports the coordination of the activities in question. Other, more intangible resources must also exist such as trust in strangers, goodwill to open up your home to others and a belief in the Hoffice idea itself. It is hard to know what the greatest bottlenecks are, but one thing that is crucial for making Hoffice work is the presence of enough people who have the resources and the will to open up their homes to others by hosting Hoffice events.

Karin Bradley and me also used Hoffice as one of three cases in our paper "The sharing economy as the commons of the 21st century" back in 2015. Here's the (open-access) published article and here's a blog post about the article. We submitted the article in November 2015 and it was published 20 months later, in July 2017.