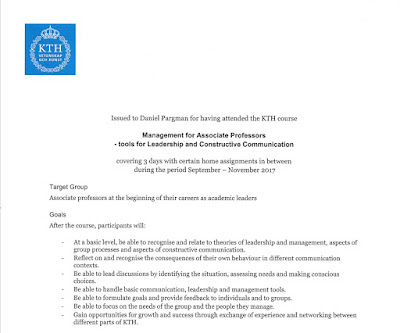 I have taken a course during the autumn that is variously called "Leadership for associate professors" and "Management for associate professors". The subtitle also somehow differs between "Tools for constructive communication and feedback" as well as "Tools for leadership and constructive communication". The course ended almost four weeks ago but I just haven't had time to write about it until now! I have in fact worked so intensely lately that I haven't had time to write blog posts for the better part of a month because due to my work load. I have however taken notes and plan to write up a bunch of blog posts over Christmas and backdate them so it will look like they were published "back then".


I have to say that this course is probably the best course I have ever taken at KTH and the teacher/course leader, Magnus Åkesson (a Learning and development manager and an "ICT-cerfified Coach") was great - not the least because he was practicing what he was teaching.

Course participants (Almost 20 associate professors from various parts of KTH) met for three full days in September, October and November. We also read a few papers as well as book, Susan Wheelan's (2014). Creating effective teams: A guide for members and leaders (Sage, 5th edition). It wasn't a bad book but it felt very American and while it was supposed to be about "any organization" it naturally primarily drew from examples from US companies. The structuring trope of the book was a model of the different stages a group moves through from being a newly minted "group" to becoming a smoothly functioning and highly effective "team". Part of the course treated that process but I won't go into that here.

Something I found particularly interesting was the distinction between "leadership functions" and "management functions". A leader helps unify, lead, represent and fight for a (research or other) group and its members. A manager instead has formal authority and represents (and fights for) the organization, its objectives, rules and values "in contact with [in relation to] employees and the environment". Both the manager and the leader can yield different kinds of power ranging from coercive, formal, expert, referent, information and relational power. I took down a note which stated that "leaders get followers" while "managers get praise from above" and I should come as no surprise to those who know me that I personally prefer to be a leader rather than a manager.

I very much liked the part of the course that suggested we should move from focusing on problems to instead refocus and search for solutions, e.g. to let go of questions like "why did this happen?" (sort of like asking "why, my God, have you forsaken me?") and instead ask "what do I want to happen next?". That's sort of like reframing "problems" into "challenges" and "challenges" into "opportunities". Some other examples of this way of thinking are:
- Switching from "Tell me about a problem area in your skills?" to "Think of something you would like to be better at!".
- Switching from "Why have things gotten so bad?" to "What goals do you want to reach?".
- Switching from "Whose fault is that?" or "Who is to blame?" to "Whose help do you need to achieve your goals?".
- Switching from "Why is it so difficult to change?" to "What would constitute signs of progress?".


Magnus (course leader) referred to three different "perceptual positions". This idea apparently builds on the Gregory Bateson's works (I've read his most well-known book, "Steps to an ecology of mind", but can't remember that I have previously heard about "perceptual positions"). Anyway, the three positions are:
- Position 1: Myself in focus (my needs, my understanding etc.)
- Position 2: The other person in focus (your needs, your opinions etc.)

- Position 3: The situation in focus (what needs to be done to progress in this situation)
When challenged, it is exceedingly easy to fall back to position 1 and react based on your own needs (including the need to protect your own self). Position 2 sounds both more empathic and sympathetic but can also be a cul-de-sac that does not really lead forward beyond asking "so how did you feel then?". So it is only when we are in position 3 that we behave professionally. I thought this was an interesting point; to be professional, you can not focus on your own self and on your personal needs, nor on the needs of the person you have in front of you. Your focus should instead solely be on the problem, e.g. "how can we solve this problem (and get on with it)?". This is probably something that we all forget now and then - or in fact something we forget very very often!

Another useful part of the course concerned feedback and more specifically how to give constructive feedback. We did several exercises and got lots of really good advice but it was slightly disheartening to realize how often feedback instead is delivered in such a way that it becomes dysfunctional instead of constructive (e.g. feedback that "fixes" the immediate problem but that is delivered (or "metered out") in such a way that it counteracts the whole purpose of the organization - such as building a team that works together and strives towards some common purpose/higher goal). I carefully took down notes when Magnus talked about rules and how to apply them and especially when he said that "when you feel uncomfortable or unsafe, you might cling to using the rules improperly rather than in a better, more flexible way". I'm sorry to say that I have met managers at KTH who of course must have taken courses like this but who seem to have missed the whole point of courses like this. So sad.

Besides the practical exercises (fun!), one of the most interesting ideas was that we all, as leaders and managers, move in and out of different "academic rooms" (of leadership) throughout our careers. The four "rooms" (spaces) as proposed by researchers at Chalmers were:
1) The research group - leading individual research within a field of knowledge
2) Educational programme - leading in an educational environment
3) Academic line/department - leading the formal organization and administration
4) Areas of strength/centres of excellence - leading cross-scientific environment

The university needs leaders in all four areas and it is possible to move in and out of them at different points in a career. The paper however also states that:

"It is important to keep one foot in your scientific discipline (in the form of networking, doctoral students and courses). This anchoring is part of leader/manager legitimacy but also a necessity in order not to lose touch with the research front."

I personally feel very drawn to (only) leading a research group (room 1) and I could easily imagine forever staying away from taking upon myself other, "larger" tasks in the organization. To me the organization sometimes behaves irrationally or worse (I've seen many examples - some of them documented on this blog - and have at times felt stung by its thorns) and (I'm sorry to say) I would prefer neither to perpetuate nor fall victim to spending a substantial (or even a minor) part of my time trying to understand the incomprehensible or enforcing the idiotic. Better to stay out of it and concentrate on the things I know I'm good at, right?

My usual question when I take a leadership or a pedagogical course is "while this was great, how come it seems that nothing of what we talk about in this course is deemed important and taken into account when we hire faculty or apply for promoted at KTH?". It instead seems we imbue this substance called "paper" (or alternatively the logical category "documents" in a computer) with magical abilities and the general rule seems to be that the more pages, the better and the stronger the magic.

At a lunch during the course I was saddened to hear that each person around the table had a story about an (excellent) candidate they knew who hadn't even bothered to apply for a position at KTH due to the comprehensive (i.e. excessive) demands of documentation (with many asked-for categories of documentation being exotic or even unique to KTH). It seems we demand much more papers (or heftier so-called "documents") than most comparable universities ask for - and this sometimes scares people away! The worst-case scenario is that it is the very best - the people we want the most, but who can also most easily get a job elsewhere - sometimes don't even bother to apply! That is shocking and should call for an immediate "accident investigation" ["haveriutredning"] but I've never ever heard this issue be described in terms of it being a "problem". Quite the opposite in fact as the demands for more documentation instead steadily increases over time (my fellow course participants were in total agreement about this based on demands for documentation at different stages during their careers).

To summarize; the course was theoretically grounded but also filled with exercises and roleplay and it was, all in all, the best course I have taken in this area (personal development, pedagogy for university personnel etc.).
.
Upplagd av pargman kl. 21:21