.
I have written about the FlightViz visualization tool that a group of students developed for the FLIGHT research project (for example here and here), but we now have not just one nor just two but three new visualization tools that work with our dataset comprising of all KTH employees' all plane trips during 2017-2019 (anonymized, I might for example be user "p1234").

My colleague Mario Romero is the course leader for "DH2321 - Information Visualization" and me and Elina pitched the FLIGHT project to the students taking the course when it started back in January. The course has its own homepage and I expect the projects I describe below to appear there at some point.

I think of the course and its outcomes in terms of "data sets" and "visualizations on flat screens". After pitching to the students no less than three groups who wanted to work with us (and our data set)  were formed and we had to think a bit to make sure that the three groups found three different angles instead of all doing more or less the same thing and stepping on each others' toes.

Flightwise consists of Fabio Cassisa, Ying He, Yuwen Hu, Bastian Orthmann and Jayanthi Raghunathan. Flightwise is primarily a tool to keep track of carbon emissions from flight and the tool makes it possible to compare and understand CO2 emissions patterns from schools, divisions/departments and individuals. KTH has recently (December 2019) adopt ambitious travel-related carbon emission abatement goals and FlightWise also helps compare and support the attainment of said goals by visualizing these goals in comparison to current CO2 emission levels. 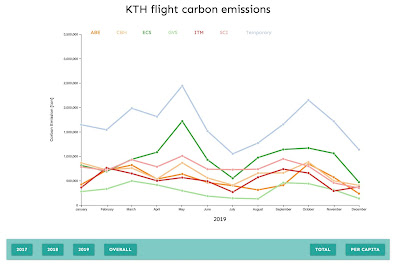 KTH CO2 emissions from flying during 2019 by school. My school (EECS but "ECS" in the image) has the highest emissions (but also most employees). The light blue "temporary" category are non-KTH employees whose trip was paid by KTH (PhD thesis opponents etc.). 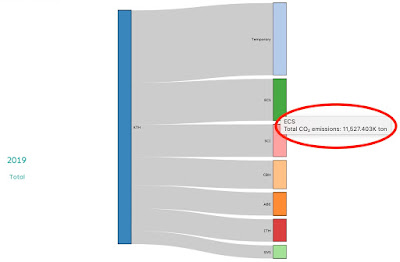 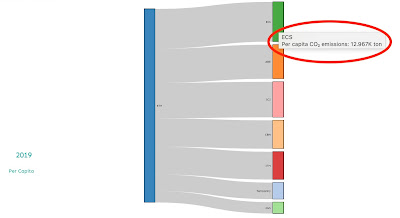 EECS was the school with the most employees in 2019 (>800) so we will obviously have larger emissions than the ABE school (<500 employees). It however turns out we also have the highest per capital emission (13 tons per person in 2019). 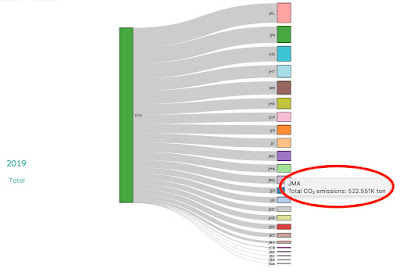 There are many departments ("divisions") within the School for Electrical Engineering and Computer Science (EECS) and Media Technology and Interaction Design (MID) where I work is the 11th biggest emitter at our school with >520 tons of CO2 emissions from flying in 2019. 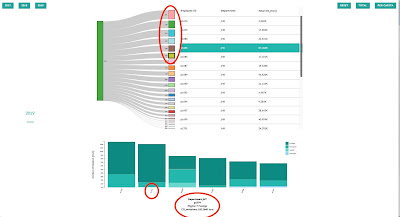 It's also possible to compare individuals and these are the six top emitters from six top-emitting EECS departments. These six persons each emitted between 67 and 127 tons of CO2 emissions from flying. The second largest emitter clocks in at 120 tons and most of these emissions come from the 7 intercontinental trips in 2019 (besides the 5 trips that were made within Europe),

Flight Fighters consists of Philip Axelsson, Beatrice Brånemark, Elin Forsberg, Lovisa Forsberg and Viktor Lemón. The Flight Fighters tool visualizes KTH departments' flight travel patterns and habits and visualize data that can help answer questions such as "who flies?", "when do we fly?" and "where do we fly?". 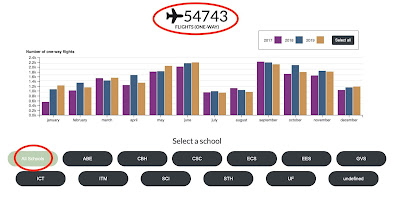 Almost 55000 one-way trips were conducted at KTH between 2017-2019. The most popular months to fly are June and September. We only have 5 schools now but the 2017 data comes from the 10 pre-merged schools we had back then. 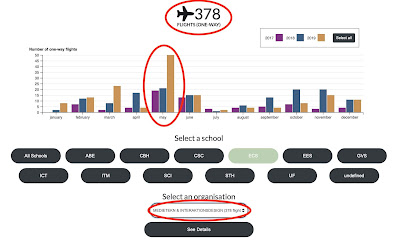 My own department, Media Technology and Interaction Design (MID), made 378 one-way flights during the period 2017-2019. Our biggest and most important conference happens in May every year (in different places in the world). This year's upcoming conferenced was just cancelled due to Coroana so this year's data will look very different. 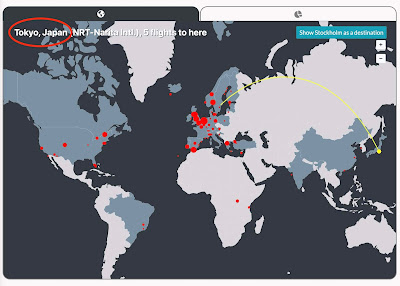 This is a map representation of where we (MID) flew during 2017-2019. We for example flew 5 times to Tokyo. In general we (of course) fly a lot within Europe. Flight Fighters consists of Albin André, Amelia Lindroth Henriksson, Agnes Petäjävaara, Aleksandra Soltan, Siyuan Su and Johan Wieslander  This is the most experimental tool - it visualizes "carbon velocity" - carbon emissions in terms of CO2/day during 2019. The longer the distance of the trip and the shorter the duration the higher the CO2/emissions per day. This representation does not so much answer questions as it poses them and I think it's very intriguing. This "carbon calendar" shows the relation between how far people travel and how long they stay, e.g. when (at what time of the year) are we the most efficient at pushing CO2 emissions into the atmosphere? Would it be possible to make longer trips "count" more by regarding them as "investments" and by extending them in time, i.e. if you are going to go to LA (≈ 3000 kilos of CO2 emissions), perhaps you should take the opportunity to stay there for a longer period and take the opportunity to do many things rather than just stay for the duration of a three-day event and then directly travel back home? 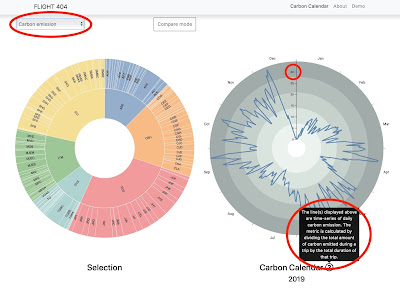 Left: Carbon emissions by school (and by department within schools). It's also possible to choose total flight distance, number of employees or number of trips. Right: CO2 emissions/day from our flying. The peaks represent 30 tons of CO2 emissions/day. 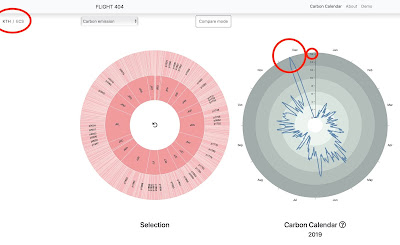 Left: Carbon emissions at my school, the School of Electrical Engineering and Computer Science (EECS). Right: Carbon emissions per day at EECS. There's a peak at 16 tons/day in December but we haven't analysed why that is. Now we know there is a peak in December though and we thus have the option of investigating it. 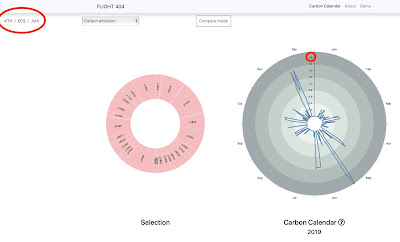 Left: my department, Media Technology and Interaction Design (MID) with info about top emitters (anonymized). Right: we flew a lot in May, June and December last year. The May peak was due to the annual CHI conference which was held in Glasgow last year. I don't know for sure what the other peaks are but could easily find out by asking around at the department. 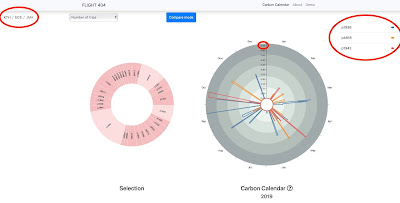 Individual carbon emissions of some semi-randomly chosen "high emitters" at my department (p1936, p1942 and p4918). Do note that the representation on the left if by number of trips rather than by CO2 emissions.

We are really happy about the results and will probably be back next year and pitch again in the same course. Our FLIGHT research project will have progressed and it is probably the case that the data set and the questions we dangle in front of the students will be different from this year's data.

The time schedule for the course was very compressed and while we were in touch with the students at the beginning of their projects, contact thereafter was sparse - the students just didn't have time to meet us (regularly) and to take care of feedback from us so the sensibly set out and just did things. While we are very impressed with all the groups' results, there are are bound to be opportunities for improvements in all of the tools.

We now want to get access to these visualization tools to we can play around and discuss them within the research project. It could then be that we choose to continue to develop one of the tools - or that we will be "inspired" by these tool and design yet another tool from the ground up.
.
Upplagd av pargman kl. 20:37