Doing your thing (whatever that is) (reflection) 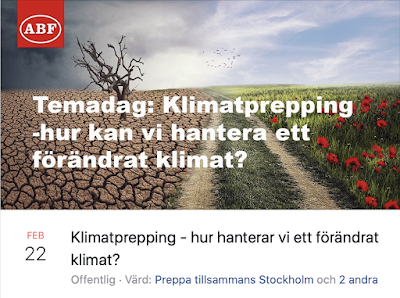 I recently went to a local event on "climate prepping"


I recently went to a local event on a lark, "Climate Prepping - how can we manage a changed climate?". It was organized by a local association, "Prep together Hägersten", I saw the Facebook event in my feed the very same day and it was held nearby (a 20-minute walk).

I listened to psychologist Karin Kali Andersson who gave a talk, "From climate anxiety to action". Some things were good in the talk, others less so. I was irritated when she recurrently referred to "research" without giving any hints as to what research (who, what discipline, when and what's the name of the five-stage model you are presenting right now?).

She did however discuss climate action by placing activities in a graph with two axis; actions that had smaller vs larger effect and actions that did or did not challenge the system (had structural implications).

Personal actions we do in our everyday life can have small effects (boycotting plastic bags or plastic straws) or larger effects (not flying, stop eating meat), but, they are personal decisions that still fit within a consumer power (consumerist) paradigm that hardly constitute a challenge to business as usual. I suggested my FLIGHT research project could represent structural change and while she agreed it could have large-ish effects, she still discounted it since the project is centered on decreasing CO2 emissions only in one specific organisation. She instead pointed to End Ecocide - a popular movement that wants to institute global laws that make ecocide a crime - as an example of something that could have large structural ramifications. She also mentioned a EU law to outlaw plastic straws an an example of structural change (large reach) but with limited effects. I pointed out that taking into account that we all have limited resources in terms of time, attention, money etc. outlawing plastic straws did not see like good use of EU parliamentarians' time and attention, something Karin agreed with. These parliamentarians could have asked themselves what they could accomplish together and perhaps aimed at something that would have had larger effects than banning plastic straws.

Someone in the audience then said that we should think in terms of missionaries and religious conversion rather than just about what we ourselves can do. I first thought it sounded nuts but then realized that that was a very shrewd perspective. Taking into account that we all have limited resources in terms time, attention and money, the best way to overcome such limitations is to recruit others to do the work you yourself do not have time to do (or the money or whatever other resource that is lacking or constitutes a bottleneck).

In the concluding session of the day, an open-floor discussion, it was apparent that people struggle with limitations in their lives; they did something (or many things), but they wanted to do more and partly had a bad conscience for not doing "all they could do" (or everything they imagined that they could do). If they grew food, they had a bad conscience for not participating in demonstrations - and vice versa. I also feel there is more I could do and while I am a member of an ecovillage, I am nowadays the least-active member and have for years felt that I should do more. Thinking about the event after it was over and done, I had a couple of minor epiphanies though:

1) As a teacher, I am a missionary of sorts. I have, as part of my job, the opportunity to every year change many people (students) a little and to change a few people a lot. This could very well be my greatest contribution to sustainability and it must surely add up to a much bigger impact than any particular lifestyle changes I myself could do in my own life. This is a privileged position (not everyone has the platform and the necessary credentials and skills to be able to legitimately "preach" and "convert" people) and I thus have a responsibility make the most of it.

2) As a researchers, all my current research projects concern different aspects of sustainability and some projects actually do have system-changing potential. The FLIGHT project aims to help KTH reach its climate targets and decrease CO2 emissions at KTH by more than 50% between 2020 and 2030, and, while KTH is just one organisation, the methods and the effects could, if successful, spread to other organisations.

While this blog post constitutes a personal revelation of sorts, these insights of mine could of course also be generalized so that they are valid also for you! I thus think everyone else should think this way, e.g. "what are the things that I could do that have the biggest potential to effectuate change?". If you can ask that question and answer it with your head held high, then you don't need look back at what else you could do/could have done and have a bad conscience about all those "could-have-beens".
.
Upplagd av pargman kl. 04:32