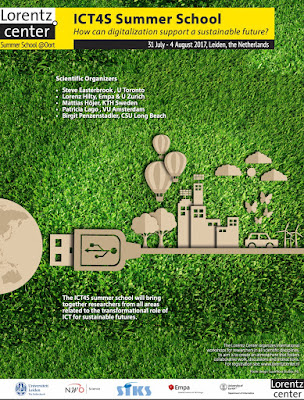 The poster for the previous  ICT4S Summer School (2017)

We will organize a summer school on ICT for Sustainability at the Lorentz Center (University of Leiden) between Monday August 17 and Friday August 21 - welcome!

At the most recent ICT for Sustainability (ICT4S) conference (in Lappeenranta, Finland in June 2019), I suggested to Patricia Lago that perhaps it was time to organize a new ICT4S summer school. There first ICT4S summer school was organized at the hilariously great Lorentz Center back in August 2017 (and I was a guest lecturer at the summer school).

Me and Patricia recruited more people at the conference and later, at the end of September, Patricia submitted our proposal. The five applicants who have worked with this application are:

The Lorentz Center has a relatively long application process and in mid-December the application was conditionally approved, but we needed to clarify some points and we submitted a revised proposal in the beginning of January. Our revised application has now been accepted and we thus know for sure that we will organize a summer school this coming summer between August 17-21.

Invited speakers to the upcoming summer school are (we hope all will be able to confirm their participation):

We still need to jump through some administrative hurdles (such as an "intake meeting" with the Lorentz Center), but prospective participants (PhD students and postdocs but also junior and senior researchers) should keep their eyes open for an invitation to apply to the summer school during the spring!

I have to press home the point that that there really is no better location for the summer school than the Lorentz Center (whose slogan is "you do the research, we do the rest"). I also want to emphasize that we are interested in reaching out to people and neighboring communities who haven't been to the ICT4S conferences and who could help broaden the field of ICT4S through their presence at the summer school!

Below is the "scientific case" and the a motivation for why we wanted to organize a (second) ICT4S summer school at the Lorentz Center:

Information and Communication Technology (ICT) has a central role to play in digitalization and the transition to a sustainable society. ICT offers us a rich set of tools to collect and analyze diverse sources of data that helps us develop and share new solutions, and increasingly, ICT provides new low-energy alternatives to physically moving people and goods around the planet. At the same time, ICT can erode democratic governance, reinforce inequality and exploitation, increase energy consumption, and seduce us into patterns of over-consumption and waste as we buy and discard an ever-growing set of gadgets. While ICT can help reduce energy consumption through effects such as dematerialisation, at the same it generates new demands for energy consumption, for example for bitcoin mining [1,2] and artificial intelligence [3]. The complexities of these interactions between ICT, society and the economy must be disentangled in order to support the growing commitment to address negative impacts on the environment and society [4,5].

Since its inception in 2013, the ICT for Sustainability (ICT4S) research community has coalesced around a common set of research challenges that address this dilemma, focusing both on how to make ICT greener, and how to leverage the power of ICT to develop sustainable solutions in diverse areas such as urban futures, transport, buildings, food, electricity, clean water, and the achievement of the sustainable development goals (SDGs). The ICT4S community already organized six successful international conferences (Zurich in 2013; Stockholm in 2014; Copenhagen in 2015; Amsterdam in 2016; Toronto in 2018; and Lappeenranta in 2019); a seventh conference will be organised in Bristol in June 2020. The conference series has, over the years, been successful in developing an interdisciplinary community of researchers, and in providing a platform for discussing and presenting new ideas. The ICT for Sustainability (ICT4S) research community concerns itself with sustainability issues that are related to ICT (both as a challenge and as a technology to address the challenges). This is what distinguishes it from others, specifically from the engineering communities that predominantly focus on the use of ICT methods and tools as a solution for more narrowly defined sustainability-related problems [6].

Interdisciplinarity, however, needs to be nurtured. This is especially true in this field of research, which (i) demands collaboration within- and across disciplines, (ii) requires the engagement of the next-generation researchers, and (iii) is in dramatic need of regular discussion and action. A conference once a year is insufficient to provide such collaboration context. Therefore, we are seeking intermediate opportunities for the ICT4S community to exchange results and ideas, and grow.

Why a second ICT4S Summer School

Motivation: In the closing session of the 2019 ICT4S conference in Finland, the attendees brainstormed on the status of the international research community. There was a general consensus that it would be beneficial to (1) actively stimulate growth in terms of both the size of the community, and its interdisciplinarity, and (2) reach out to young researchers.

Many recalled the positive experience of the first International Summer School on ICT for Sustainability, which was organized at the Lorentz Center in 2017. At the time, the trigger for organizing a Summer school was for the community to meet between the two conference editions in 2016 and 2018 (which for organisational reasons would be almost 2 years apart). This time, however, we observe a more structural need to kickstart research collaborations in addition to the international conference and hopefully resulting in publications then presented at the conference. This structural need originates in the multidisciplinary nature of the field of ICT for Sustainability itself, in which it is challenging to establish careers.

Building upon past success. The summer school in 2017 was especially aimed at nurturing the next generation of ICT4S scholars and we would like to have the opportunity to follow it up with a new summer school. There are large differences in the support and training available for junior researchers in different countries and some research groups have since made significant progress in their own institutions. However, the international community would strongly benefit by developing its shared intellectual foundation for research and graduate education.

The Summer School in 2017 was unanimously considered a great success. It attracted a broad range of PhD students and Postdocs from various disciplinary backgrounds and it kickstarted new research collaborations that led to three scientific publications the following year. Some of the contacts made at the summer school also had further consequences beyond 2017 and 2018. One example is that TU Berlin-based PhD student Johanna Pohl and University of Zürich-based PhD student Jan Bieser are currently (autumn 2019) visiting Stockholm where they cooperate with researchers from KTH Royal Institute of Technology (School of Architecture and the Built Environment) and the VTI Swedish National Road and Transport Research Institute. In a similar way, the LUT-based PhD candidate Shola Oyedeji will visit the Vrije Universiteit Amsterdam as a postdoc during 2020 on joint research in software sustainability assessment; and the Lancaster-based PhD candidate Kelly Widdicks will visit KTH Royal Institute of Technology (School of Electrical Engineering and Computer Science) as a postdoc during 2020.

So, the 2020 summer school will be considered a success if it (similarly to the first edition in 2017) results in at least three academic papers that are written by various new constellations of researchers and in many new contacts and collaborations. We expect a summer school to have further knock-on effects, but such might take years to appear (as per the examples above). Should this second summer school be (as we hope) successful again, we will consider it as a recurring event.
.
Upplagd av pargman kl. 20:22