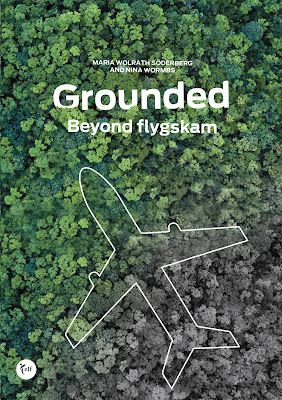 I was part of yet another research grant application that was handed in last week, "PAIN: Emotional aspects of goal conflicts in climate change". This is a Big application where the work effort was led by professor Nina Wormbs at the Department of History of Science, Technology and Environment at KTH. The one other person who put the most work into this application was Maria Wolrath-Söderberg from Södertörn University. Everyone from the FLIGHT project is also part of the application (me, Markus Robèrt, Elina Eriksson and Jarmo Laaksolahti) and the other two senior researchers who are part of the application are Marco Armiero and Cecilia Åsberg.

The call to which we submitted our application is called "Realising the global sustainable development goals" and the application had to be between 10 and 20 MSEK large (we are much closer to 20 than to 10 MSEK). The project, should it be approved, will run between January 2021 -  December 2024. I attended an information meeting about the call four months ago (October) because our research group had decided that this call was interesting for us to apply to. At that information meeting Formas explicitly said that they are looking for post-normal, transformative and truly transdisciplinary research applications that work towards transformative rather than incremental change, and that they will fund a limited number of flagship projects. Should our application be granted, part of it will be used to hire a PhD student (at Nina's department) and a post-doc (at our department) and this is something we will know four months from now, in mid-June.

The application itself came out of open-ended discussion about the intersection between work that we do in the FLIGHT project ("Decreased CO2-emissions in flight-intensive organisations: from data to practice") and work that Nina and Maria have done on similar issues but from another angle. Where we look at professional travel in academia (travel that is done as part of your job as a researcher), Nina and Maria have looked at a type of "forerunners" - people who have decided to quit flying in their private lives and the reasoning behind that decision. Nina and Maria recently (end of last year) published a report about this called "Grounded: Beyond Flygskam".

Ours and their interests thus heavily overlap and as it so happens, both of us will talk at the upcoming (Feb 20) KTH Sustainability pub, "The Frequent Flyer Academy: how can we limit plane travel?". From the perspective of FLIGHT, this application constitutes a follow-up to our recently-started 2019 - 2022 research project - something we talked about already at the time when we handed in our application a year ago.

The application has six work packages and the (people who are part of the) FLIGHT project for the most part took responsibility for writing (and later running) two of the work packages; "Design for emotional engagement" and "Bargaining with emotions in real-life mitigation projects". These work packages connect to work we already do and would thus constitute a continuation of our current work. We are really excited about this application and about the possibility of working closer together with Nina, Maria and the other researchers who would be part of the project (Cecilia, Marco and others)!

We focus on the goal conflicts of climate change action (SDG 13) and in particular the true goal-conflict of knowledge production and mobility on the one hand and lowering emissions on the other. You cannot attain both goals at the same time and options at your disposal are to choose, to compromise or to abstain. This gives rise to emotions, often not allowed for in transition processes, but part and parcel of what it means to be human. Our inability to handle emotions contributes to the inertia in climate-change mitigation and we claim that a successful approach should also incorporate the emotional aspects of human behavior.

A focus on the knowledge economy is worth while since scholars have a high capacity to comprehend climate change, a responsibility to take the lead in a transition, and non- action undermines their own message; they have great resources, both material and immaterial; and they are also part of the problem. We will study the arguments scholars have around climate change and their own behaviour, what is considered OK for a scholar, and how to understand activism. We will design visualizations for engagement using data from climate change scholars' mobility and work with research groups that aim to lower their emissions. And we will commission a playwrite to write a manuscript for the stage.

I also think the first paragraph of the application's "Introduction" is a powerful summary of what this project is about:

This project deals with the pain in unsolvable goal-conflicts and how emotion can be made into an asset rather than a hindrance in the transition towards a sustainable society. We argue that our inability to handle emotions contributes to the inertia in climate-change mitigation and we claim that a successful approach should also incorporate the emotional aspects of human behavior. This is easier said than done. “Most people have [...] oriented their solutions toward the easy, and often to the easiest of the easy, and yet it is clear, that we must trust in that which is difficult” as Rainer Maria Rilke reminds us (quoted in Moser 2019).

Thank you for applying to Formas’ call for proposals “Realising the Sustainable Development Goals”. We are pleased with the enormous interest the call has generated – 174 applications were registered in Prisma before the call closed on 6 February.

Sweden’s research community has truly mobilised around Agenda 2030, which was exactly what we were hoping for. With this great response, we see the potential for Swedish research to help achieve the sustainable development goals (SDGs). We are therefore pleased to announce that on 5 February, Formas’ Scientific Council decided that Formas will contribute an additional 100 million kronor to the call for a total allocation of 200 million kronor. Given the large number of applications, the grant award rate is still likely to be low.

To ensure a high-quality review process, we will postpone the decision date from June to September.


Here is an article about how we managed the large number of applications.