Man is a dinosaur (popular article) 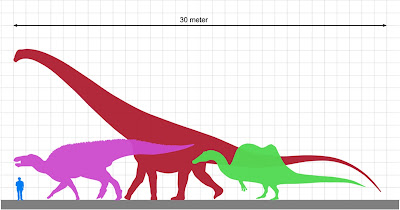 Man is a dinosaur

KTH just published a (Swedish-language) popular science text about our brand new science + art + communications project, "From Homo Sapiens to Homo Colossus” (here's my previous blog post about that project). The article is right there on KTH's front page and it is called "Människan är en dinosaurie” ["Man is a dinosaur"].

In what way are we dinosaurs? We are dinosaurs because we (Swedes) consume as much much energy in our everyday lives as a 30-ton dinosaur needed to fuel its body from one day to the next. I had earlier routinely used the number 20 tons. I cannot remember any longer exactly where that number came from, but counting embedded energy (the energy needed to manufacture the stuff - elsewhere - that we consume in Sweden), I now believe it comes down to closer to 30 tons than 20 tons on average.

One thing I have realised I liked less with this article is the way it came to be. The journalist/communicator who works for KTH never spoke to me in person nor on the phone. Instead he mailed a bunch of questions and I foolishly spent quite a lot of time answering them - so it feels like I did at least half of his job. It would have been easier and more enjoyable for me if we had had a chat for half an hour and he would have created an article based on that interview and I have decided that I will never again accept this type of arrangement. I'm not a journalist and I shouldn't do the journalist's job (nor am I paid to do the job of journalists). The text itself is good though and I believe the journalist did a good job of taking the text I wrote and making an article of it.
.
Upplagd av pargman kl. 01:58