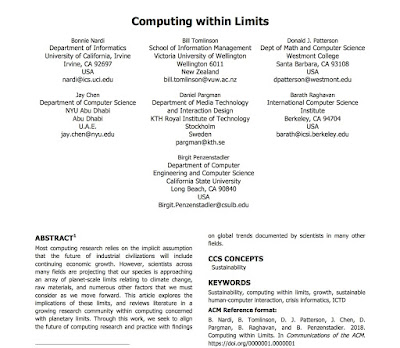 Great news! Our article "Computing within Limits" has been accepted for publication in ACM's journal "Communications of the ACM" (CACM). The article is written by Bonnie Nardi, Bill Tomlinson, Don Patterson, Jay Chen, Daniel Pargman, Barath Raghavan and Birgit Penzenstadler and this is a Big Thing for us as the print version of Communications of the ACM has a "readership of over 100,000 ACM members"!

"As the world’s largest computing society, ACM strengthens the profession's collective voice through strong leadership, promotion of the highest standards, and recognition of technical excellence. ... Founded at the dawn of the computer age, ACM’s reach extends to every part of the globe, with more than half of its 100,000 members residing outside the U.S."

Communications of the ACM is ACM's flagship journal and it reaches all ACM members everywhere in the world. We submitted our article in August and we imagined that the reviewers would want us to be a bit more tempered, but they instead surprised us by asking us to emphasize our critique of the economic system more. Bonnie (first author) and me managed to snag some time for a very productive writing session back in October when we met at a workshop about "Solutions for Economics, Environment and Democracy" in Siegen, Germany.

We submitted a rewritten version of the paper based on the feedback we got and it was provisionally accepted for publication in the beginning of January. There were however still a few more things they wanted us to fix urgently - which we of course did. Only 10 days ago we found out they were satisfied and that the text has been place in their queue:

Glad that we can response so soon after your inquiry!

It is a pleasure to accept your manuscript entitled "Computing within Limits" in its current form for publication in Communications of the ACM.  The comments of the reviewer(s) who reviewed your manuscript are included at the foot of this letter.

Thank you for your fine contribution.  On behalf of the Editors of the Communications of the ACM, we look forward to your continued contributions to the magazine. You will hear from us in a few months, when the article is slated for production.

The article will perhaps (I'm just guessing here) be published this summer and it will hopefully generate discussions. I think this is a breakthrough for Limits - perhaps there will be a lot more submissions to the 2019 workshop on Computing within Limits? Perhaps some papers that have been published at Limits during the first four years (2015-2018) will be in vogue and get read more widely? Or perhaps there will be a backlash when techno-utopian computer scientists reject our arguments and our propositions? Here's the abstract:

Most computing research relies on the implicit assumption that the future of industrial civilizations will include continuing economic growth. However, scientists across many fields are projecting that our species is approaching an array of planet-scale limits relating to climate change, raw materials, and numerous other factors that we must consider as we move forward. This article explores the implications of these limits, and reviews literature in a growing research community within computing concerned with planetary limits. Through this work, we seek to align the future of computing research and practice with findings on global trends documented by scientists in many other fields.
.
Upplagd av pargman kl. 22:19