A summary of my 2017 Academic production (follow-up)

I now follow last year's lead, but while I did a follow-up last year as well as a follow-up of the follow-up, I have concluded that the order of the content should be switched. The second blog post last year was the more visual summarization and it makes more sense to start with it. So below is an image that represents my total academic production of texts during 2017. It encompasses texts that I worked on in 2016 but that were presented/published in 2017 (these will also be on last year's list) as well as all texts that I worked on during 2017 (including texts that will be presented/published in 2018). 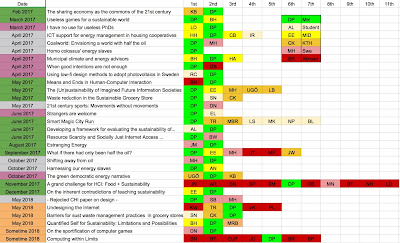 First a note on what is included and what is excluded from the list above. I have excluded workshop proposals and grant applications - this is only a list of papers and texts that were aimed at being presented or published at conferences and in academic journals. I have also excluded papers that were rejected or withdrawn in 2016 even though some of them might make a comeback this year. I have included every paper I have submitted somewhere, anywhere - even it's just an extended abstract or a submission to a workshop (e.g. moderate work effort).

So here's a top-level breakdown of the 30 texts in the image above:
- 9 journal articles
- 1 book chapter
- 9 "real" conference papers (aimed at conferences with proceedings, e.g. resulting in a "publication")
- 11 "fake" conference paper, e.g. extended abstracts resulting (only) in oral presentations, workshop submissions etc. There were a lot of "fake" texts this year.

Do note that while 9 journal articles sounds great, some of them were rejected. In fact out of these 9 proposed/pitched journal articles 3 were published, 2 are under review, 1 was withdrawn and 3 were rejected. Do also note that the bar for a "journal article" is quite low. A journal article doesn't have to be a long text, the important criteria here is that it exists only as a text since it was submitted directly to a journal, i.e. it is not associated with a conference and has not been presented in front of an audience).

The first column describes not when the text was produced or submitted but when it was (or will be) presented/published. The color-coding of the first column represents the January 1, 2018 status of the paper:

The second column is of course title of each text. Sometimes the paper has a long subtitle that didn't fit. Columns three (and onwards) lists the number of co-authors, their initials and their institutional affiliation, e.g. me, students at my department, colleagues at my department, colleagues at my university, people at other universities in Sweden and people at universities abroad.


In line with last year's follow-up, here are some more qualiative observations based on the image above or on a comparison with last year:

Observation 1: This blog post "should" have been published in the beginning of January rather than in the beginning of February. The status of some texts above has in fact changed during the last month, but the image above is a snapshot of what had been done and what I knew a month ago, on January 1, 2018.

Observation 2: All but one text has been written together with one or several co-authors. The text I wrote by myself was furthermore a rejected extended abstract so I have basically not written a single text by myself in 2017

Observation 3: While the number of texts are similar in 2017 as 2016 (around 30 texts), it might be hard for the casual observer to understand that some texts above have required 10 or 25 times as much work as other texts. It's easy to write a 500-world extended abstract or a collaboratively authored paper where I'm the fifth author but much much harder to write an 8000-word journal article where I'm the first author.

Observation 4: I'm the single author of one text. Most texts (16) are written together with one other person. No less than 13 of the 30 texts have three or more authors, 7 of those have four or more authors and 4 of those texts have six or more authors. The median value (the typical text) is written together with (only) one other person. The larger the number of authors, the higher the chance that it's an international collaboration. It kind of makes sense that you for the most write "intimate" texts in dyads with people you can meet up with face to face.

Observation 5: I'm the first (main) author of 13 texts, the second author of another 13 texts, the third author of 2 texts and 4th or more author of 2 text. This implies that when I write a text, I'm usually very involved in the text because I either drive the process or I support the person who drives the process (in almost 90% of the texts). I do have to admit that being the fourth author on a text feels like "vacation" and it also feels like I'm hardly worthy of being listed as an author in such a paper...

Observation 6: I have worked together with Elina Eriksson and Björn Hedin (who are colleagues at my department) on 3 texts each out of these 30 texts. I have also worked with with master's student Sofie Nyström (same department) and with Karin Bradley, Ulrika Gunnarsson Östling, Cecilia Katzeff, Tina Ringensson and Miriam Rivera Börjesson (who are colleagues at the same university) on 2 texts each. I have also worked with other Swedes: with Mikael Höök (Uppsala University) on 3 texts and with Daniel Svensson (Chalmers) on 2 texts. It's confusing but I did in fact work with two different Swedes who have the same initials (MH) last year - Mikael Höök and Maria Håkansson! I have finally worked with international partners Barath Raghavan, Bonnie Nardi and Oliver Bates on 2 texts each.

Observation 7: Of the 30 texts I have worked on, I'd say that about 26 are about sustainability in one form or another and that's more than 85% of all texts! I'm more or less fully invested in sustainability at this point.

Observation 8: I expect several of the texts that were rejected or withdrawn in 2016 (not in the image above) or in 2017 to make a comeback in 2018 (or possibly later).

Observation 9: There are a lot of texts in play at the moment. Since on a sabbatical between January and June/July I'd say there is a very high chance that the number of published/presented texts in 2018 will be as high as in 2017 but with a larger proportion of texts with a higher caliber/quality (e.g. more journal articles and less "fake" conference papers.

Observation 10: Not a single text is written in Swedish - my native tongue. I'm Swedish, I live in Sweden, but nothing that I wrote professionally in 2017 was written in any other language than English. It's possible to interpret this in many different ways... let's just say that I'm, well, mobile. I guess I could pretty much work "anywhere". Being on a sabbatical - having a break and doing different things of my own choosing (but probably not working less than when I don't have a "break") - is great. I could imagine (sometime in the future) sharing my time between two institutions (say 50/50 or 75/25 - and why not in the form of setting aside a quarter or half a year for being elsewhere every academic year?). It wouldn't even necessarily have to be another "computer institution" - I think I could fit in at various types institutions nowadays (sustainability! energy? design? - perhaps... media and informatics for sure but that's only interesting if it's possible to in some way combine it with sustainability). Let's just say I would in fact not be averse to receiving offers, and, that's a good way to end this blog post (turned-into-an-ad) with a splash.
.