The sharing economy as the commons of the 21st century (article) 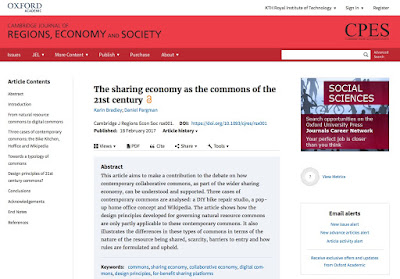 An article that Karin Bradley and me wrote wrote quite some time ago, "The sharing economy as the commons of the 21st century", has finally been published and is available online as well as as a pdf file (nicer formatting) for free. It's published in the Cambridge Journal of Regions, Economy and Society, in a special issue on Sharing Economies? Theories, practices and impacts (edited by Anna Davies, Betsy Donald, Mia Gray and Janelle Knox-Hayes). 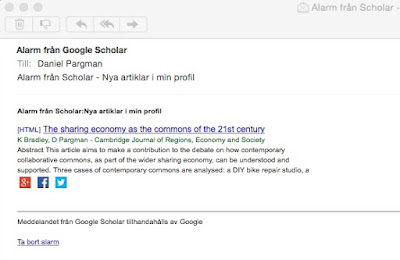 The special issue has a bunch of other articles that look interesting and that are available as advance copies online. I do however notice that our article is the only one that is available under an open access license and this fact together with the topic of the special issue, "Sharing Economies?" can easily give you lots to think about... Karin's project payed 2000+ Euro for the privilege of publishing it under an open access license and that means the article can be disseminated freely for non-commercial use, can freely be used in education, can freely be published on our homepages etc.

I have to admit I don't know exactly how these things work but I believer the article will be published (printed on paper) in CJRES 2017, no.2 - which is not out yet. I don't know but I hope I will eventually get a copy of the printed journal.

This article - believe it or not - came out of an EU application that did not receive any money ("SHARE IT: Tools for sustaining not-for-profit grassroots sharing initiatives"). That application was written by Adrian Friday, me, Elina Eriksson, Airi Lampinen and Karin Bradley and it was handed in back in April 2015. I have since written a conference paper about the sharing economy together with my co-applicants Elina and Adrian ("Limits to the Sharing Economy" - available as a pdf and presented at Computing within Limits 2016), and now this journal article together with my other co-applicant Karin - so a lot has definitely come out of the application for me. I have discussed writing something together with Airi about the sharing economy and that might just happen later this year...

Here's the abstract of the article:

Abstract
This article aims to make a contribution to the debate on how contemporary collaborative commons, as part of the wider sharing economy, can be understood and supported. Three cases of contemporary commons are analysed: a DIY bike repair studio, a pop-up home office concept and Wikipedia. The article shows how the design principles developed for governing natural resource commons are only partly applicable to these contemporary commons. It also illustrates the differences in these types of commons in terms of the nature of the resource being shared, scarcity, barriers to entry and how rules are formulated and upheld.